In an interview with Al-Monitor, Labor Knesset member Merav Michaeli refreshes Israelis' minds about the Palestinian eagerness to reach an agreement and the European Union that offered Israel a relationship package which did not make it to the press, unlike the boycott talks. 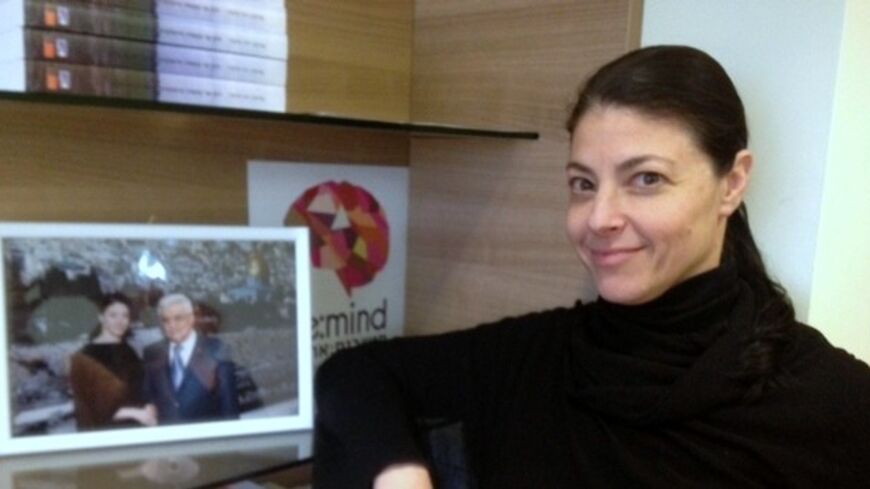 Labor Knesset member Merav Michaeli at her Knesset office, next to a photo of her with Palestinian President Mahmoud Abbas, March 18, 2014. - Mazal Mualem

It took Knesset member Merav Michaeli a whole little war against stereotypes held by men (who thought they had priority over her) to gain a spot on the Foreign Affairs and Defense Committee.

The new Knesset member, who was well-known for the feminist struggles that she waged in the media arena, marked the most prestigious committee in Israeli politics — and also the most masculine — as a target for her to conquer. At first, it seemed like a gimmick. One year later, it seems like a very natural and appropriate appointment.

Michaeli is one of the hardest-working members of the Knesset. She makes a point of not missing a single discussion, carefully studies all the issues on the committee’s agenda, and when necessary initiates background meetings with senior members of the security forces. She meets frequently with foreign ambassadors and the representatives of legislatures around the world. And yet, at the same time, she also continues to promote her social, economic, feminist and diplomatic agenda.

Over the past few months, she joined other Knesset members for two meetings with the chairman of the Palestinian Authority, Mahmoud Abbas, at his office in Ramallah. When she began talking with Abbas in Arabic (she has been studying the language for the past seven years), the Rais invited her for a personal meeting. A photo of her with Abbas is on a shelf at her Knesset office. Michaeli’s interview with Al-Monitor was devoted to diplomatic, defense and political issues with which she is rarely identified.

Al-Monitor:  How come are you so involved in these issues, but people hardly hear about it?

Michaeli:  The media works by images and perceptions, and in its view, I am a feminist first and foremost, and only after that a social activist. It was inconceivable that I would be a member of the Foreign Affairs and Defense Committee, and of course, I had to earn it, too. I spend a third of my time focusing on diplomatic and security issues, and that is a lot. I don’t believe in provocations, so my involvement in these issues doesn’t get a lot of media coverage, but that will come too.

Al-Monitor:  Nor do people know that last week you participated in a meeting between British Prime Minister David Cameron and the chairman of your party, Isaac Herzog. What did you tell Cameron?

Michaeli:  Like everyone, he wanted to know what could be done to influence Israel to sign an agreement. That is what everyone asks [Michaeli used the feminine plural for the generic as she often does when talking about groups without a clear gender, as opposed to normative Hebrew which uses the masculine plural for the generic]. I told him that I really don’t know, because they really are doing a lot. Cameron did stand on the Knesset podium and described all the wonderful ways that we would benefit from a peace agreement, but no one was interested in what he had to say.

Information is being withheld from the public. For example, in December the European Union offered Israel a relationship package, which was the closest thing to membership in the EU. It would have upgraded us in so many ways, but the Israeli press hasn’t heard a thing about it. Officially, the State of Israel did not respond to the offer, which is inconceivable to me. We prefer to talk about the boycott. The fact that we’re constantly pounding out the boycott is actually detrimental to us. The problem is that we are used to being spoken to in ways intended to intimidate us. It could be about terrorism, an atomic bomb or a boycott.

Al-Monitor:  Do you think it is intentional?

Michaeli:  Of course it is. I think that they are so opposed to an agreement that nothing interests them at all. They ignore it, which is incredible. It is similar to how Israel ignored the Arab League Initiative in 2002. Once again, we were presented with something that should have been a wet dream to us. After all those years in which the Arabs denied our existence, there is now an official decision by the Arab League, which is ratified year after year. They offer a package that includes full normalization of relations with all the Arab states, and we do not respond to it.

Al-Monitor:  But the boycott exists, and it is spreading. It is not some invention.

Michaeli:  It’s nothing like the way it is being presented. The governments of Europe are not talking about a boycott of Israel. We are the ones who keep bringing up the issue. True, public opinion in Europe differs from the government’s position, but it is still a fringe phenomenon. I’m not saying that we don’t have to worry about that. As a member of the Knesset, I will never support any sanctions against the State of Israel.

Al-Monitor:  You are a member of the Foreign Affairs and Defense Committee. Does that strengthen what you already knew?

Michaeli:  What I see and what I am exposed to, including diplomatic meetings in Congress, at the US State Department, and with European ambassadors, exposes me to information. That’s how I found out about the European Union’s proposal. Ambassadors asked me how I explain why Israel didn’t respond to it. From what I hear and understand, the threats against us are not existential. I don’t think it is possible to destroy the State of Israel or delegitimize it.

Al-Monitor:  What did you learn about Mahmoud Abbas from your meetings with him?

Michaeli:  We met twice in Ramallah, and not for long meetings. We established a kind of bonding because I speak Arabic. I got the impression that he went out of his way to show how much he wanted to reach an agreement. We were a group of Knesset members, and he went out of his way to respect us as Israelis. He said nothing provocative to us and nothing that could be open to interpretation.

Al-Monitor:  But the overall impression is that Netanyahu is right: Abbas isn’t interested in continuing the negotiations.

Michaeli:  If that’s what happens, then it will be an Israeli victory. The problem is that from my perspective, it would be a Pyrrhic victory. If you are negotiating in order to reach some result, then you have no interest in humiliating the other side, because [if you do so] you won’t achieve your result. If the purpose of the negotiations is to ensure that nothing comes from them, then great. We can say that Abbas is unwilling to recognize Israel as a Jewish state and we can discontinue the negotiations. But what is Israel willing to give in exchange? The 1967 borders with a swap of territory? It isn’t willing to accept even that.

Al-Monitor:  You are firmly opposed to entering a right-wing government. What will you do if it turns out that Herzog is following the same pattern set by previous Labor Party leaders and striving to join the Netanyahu government?

Michaeli:  I really hope that this habit is behind us. In my estimation, the party will oppose joining the government. We will not agree to that even if it involves a framework agreement [with the Palestinians]. We will only consider it if there is a permanent agreement over something real, which changes the reality on the ground.

But I also have to say that I am unwilling to accept this kind of talk about Herzog. I refuse to accept that “Buji” [Herzog] wants to join the government. He is an intelligent person, a person with a sense of responsibility, a leader who understands what the right thing is, and who wants to bring us there. Why would he pull the rug out from under himself and join a right-wing government?

Al-Monitor:  So are Yair Lapid and Tzipi Livni abusing their positions?

Michaeli:  I expected nothing less from Yair [Lapid]. Yair is right-wing, both diplomatically and economically. He grew up in a right-wing home. We only heard his positions after he was elected, because he would not state them before he was elected. I have zero expectations from him. He will not leave this government at any stage. He even said as much before he was elected that he was not about to go into the opposition. He is a crony capitalist.

Al-Monitor:  Don’t you believe that Lapid will try to meet the expectations of his electorate, which is center-left?

Michaeli:  Yair isn’t left-wing. He never considered going with the Labor Party, and what his electorate expects is irrelevant, because he decides what path to take. The first thing Yair said before he was elected was, “We won't build a obstructionist bloc with the [Balad Knesset member] Haneen Zoabis.” He doesn’t count the Arab citizens in the State of Israel. It’s a very serious case of racism to call everyone by the name of a single female member of Knesset and to turn it into a derogatory term, yet.