Former senior government officials in Jordan are concerned about the inability to introduce economic and political reforms and about overreaching by the national intelligence agency. 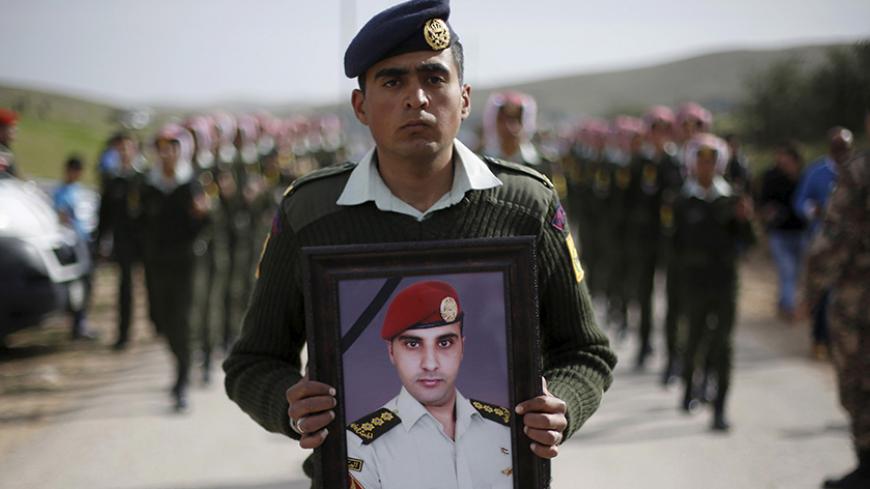 A Jordanian soldier carries a picture of Jordanian Capt. Rashed Zyoud, who was killed during a raid conducted by the Jordanian security forces on Islamic State militants in Irbid, during the funeral in Zarqa, Jordan, March 2, 2016. - REUTERS/Muhammad Hamed

AMMAN, Jordan — The northern city of Irbid grabbed Jordanians' attention March 1, when security forces launched a massive operation that left seven militants linked to the Islamic State (IS) dead along with one of their own. Two days later, King Abdullah II emphasized the “first and foremost” priority of safeguarding the security of the Hashemite state.

While acknowledging the government's legitimate fight against terrorism, a number of former senior Jordanian officials — Royal Court chief, prime minister, head of intelligence and the foreign minister during the reigns of King Hussein and King Abdullah — have expressed concerns about what they see as the leadership’s overemphasis on an armed defense and the country’s current path. They cite the troubling situation of a struggling economy with a bloated public sector, political leaders unwilling to undertake crucial reforms and an intelligence agency that intimidates members of parliament and generally interferes in political decision-making.

The Hashemite kingdom’s economy is the most worrying issue for the old guard. The government employs 42% of the country’s workforce, which led Prime Minister Abdullah Ensour at one point to describe the government as “bloated” and “unhealthy.” The rate of public sector employment is nearly triple the international average of 15%.

Such a high number of Jordanians working for the government leaves little room for economic growth and innovation. Marwan Muasher, former deputy prime minister and foreign minister, cited this state of affairs, telling Al-Monitor, “Economically, the status quo is not sustainable. We are a semi-rentier state that has exhausted its potential in terms of the government no longer being able to keep on employing people.”

Adnan Abu-Odeh, former head of intelligence and Royal Court chief, told Al-Monitor that the mentality of the government has exacerbated this problem. “The mindset that the regime established in this country over the last 50 years, [is one that says] it is me who feeds you, by getting you a job in the government [rather than] working as a plumber outside.”

With women constituting only 13% of the labor market, the country is wasting valuable human capital, further hampering the country’s struggling economy. According to the World Bank’s most recent statistics, youth unemployment stands at a troubling 28.8%. This is further disconcerting because Jordanians’ median age is a mere 22 years old. In addition, the country's public debt has climbed to 90% of gross domestic product.

While Amman is justifiably focused on fighting IS, Taher al-Masri, former prime minister and Senate president, emphasized that the kingdom cannot divorce security challenges from larger economic and political problems. He told Al-Monitor, “Stability cannot be sustained with hardships that the communities are facing.”

Calling the economic problems facing Jordan urgent, Jawad Anani, a former Royal Court chief with a doctoral degree in economics, explained, “We need to take harsh decisions.” Fiscal reforms are often unpopular and involve cutting government jobs, thus having negative repercussion on the government's popular base. Anani observed that to enact reform policies, “The government needs to have legitimacy.” He added, “Without a democracy, it is difficult.”

The former senior officials are also critical of the political leadership. King Abdullah has repeatedly called for political reforms, and Abu Odeh blamed “backwards, status quo” forces for blocking change. Given the disconnect between Abdullah’s progressive rhetoric and the sluggishness of reform on the ground, Muasher asked, “How do we explain that the king today is calling for a system of checks and balances and a parliamentary government, but no one within the executive branch is actively working to implement these objectives?”

Masri explained that when he served as president of the Senate, he faced pressure from Royal Court officials urging him to pass laws that he felt were too conservative. When Masri then spoke with the king, Abdullah voiced opinions at odds with those of court officials and reassured Masri of the correctness of having resisted the court officials' pressure. When asked about the conflicting signals, Masri frustratingly said, “We are asking the same question: Why? I have no answer.”

Although Jordan has symbols of democracy, including a legislating parliament, in reality the country is far from being open politically. Freedom House rates Jordan as “not free,” giving it a 6 out of 7 rating in political rights, one of the lowest scores, ranking it in the bottom quarter worldwide. It noted that “key powers and decision-making abilities are ultimately vested in the king,” whom Jordanians never elected. Reporters without Borders labels Amman as 143rd out of 180 in its global press freedom's index.

The aggressive stance of the country’s General Intelligence Directorate (GID) remains controversial. While praised for its role in preventing large-scale terror attacks, multiple former officials criticized GID overstepping and meddling in political decision-making. “The [GID] calls the MPs on every matter,” explained Masri. Muasher seconded Masri in this regard, stating, “It is a known fact.” According to him, the intelligence services intervene in “every area,” including in deciding who gets hired. In an April 2013 interview with Jeffrey Goldberg in The Atlantic, King Abdullah admitted that the intelligence service has repeatedly blocked his own plans for political reform and inappropriately intervened in matters beyond security affairs.

According to the United Nations, Jordan has absorbed around 639,000 Syrian refugees since 2011. While Jordanian officials repeatedly highlight this impressive feat, however, they ignore much of Jordan’s deeper structural problems. If the country lacks enough jobs for its own citizens as well as Syrian refugees, why does it permit approximately 1 million migrant laborers from Egypt and East Asia to continue working there?

While the Syrian refugees have affected Jordan’s economy, many of the country’s economic woes were present before the refugee crisis. In 2010, Jordan’s percentage of employment in the public sector was still approximately 38%, said Anani. Women’s participation in the workforce before the influx of refugees was already extremely low. Jordan has actually benefited from a dramatic increase in foreign aid due to its refugee policy.

In response to the criticisms levied by the former officials, Mohammad Momani, government spokesman and minister of state for media affairs, told Al-Monitor, “The Jordanian economy suffers from many problems, most importantly, influence from regional turmoil.” He noted that the government continues to offer more jobs to reduce poverty levels. Declining to directly address allegations of interference by the intelligence apparatus, Momani said, “Different institutions and political authorities in Jordan work collaboratively to fulfill His Majesty’s vision of a democratized and modernized Jordan.”

Despite having numerous problems, Jordan’s economy and political situation are far better than in neighboring Iraq and Syria as well as in Egypt, and the government does not launch air raids against its citizens. That said, however, prominent Jordanians worry about the prolonged effect of high unemployment and lack of political openness. Muasher thinks the government needs to act fast, stating, “If the Arab uprisings have shown anything, it is that you cannot close both the political and economic systems and expect people to remain silent.”