Iran stakes out position ahead of PA collapse

Iran's renewed interest in the occupied territories indicates that, unlike Israel, it is preparing for the possible collapse of the Palestinian Authority. 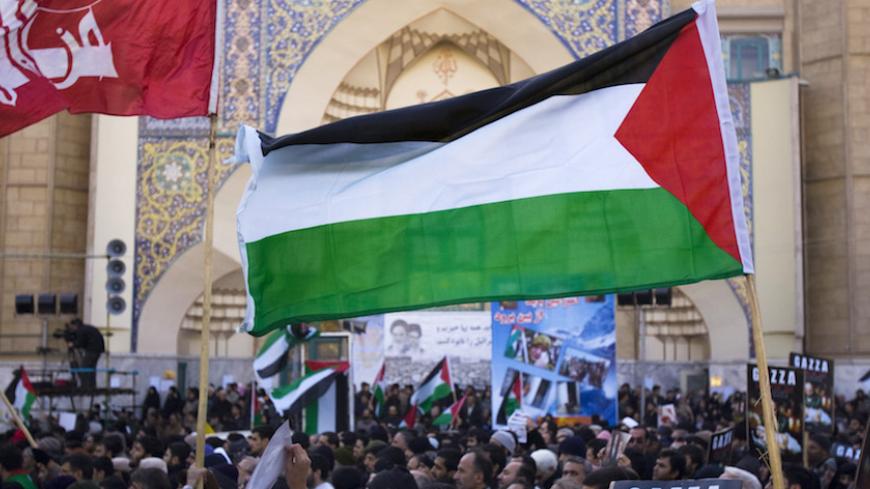 Five months ago this week, the “individual intifada” erupted. Since then, Israel has been staying the course, believing that it can contain the unrest as long as armed Palestinian organizations and armed members of the Palestinian Authority (PA) stay out of it.

But two separate statements this week — one from Beirut and the other from Jerusalem — cast doubt on the assumption that this policy will be able to prevent the unrest from escalating into widespread violence. Such a shift would require Israel to dramatically change its deployment of troops and resources.

During a Feb. 29 talk at Bar Ilan University, Minister of Immigrant Absorption Zeev Elkin, a member of the security Cabinet, offered his assessment that the Oslo Accord and the PA will fall apart as soon as President Mahmoud Abbas’ time in office is over.

“The breakdown of the PA is not a question of if, but when,” and Israel must prepare itself for that inevitability, Elkin told his audience, adding that he had given up trying to initiate serious talk about the problem behind closed doors.

How, exactly, should Israel prepare itself? Is a worried Elkin planning to call on the Israel Defense Forces to retake the West Bank and annex it once the PA collapses? Or, perhaps, will he expect the security establishment to lay out a defensive strategy that includes sealing off the West Bank?

So far, Israel has taken no real steps that indicate it is worried about a PA collapse. Maybe this has something to do with Abbas’ comments Jan. 6 that the PA is one of the Palestinian people’s greatest achievements, and that no one should dare think of bringing it down. In response to Elkin’s remarks, Palestinian security spokesman Adnan al-Damiri said that talking about the PA’s collapse is little more than wishful thinking.

This week, my Al-Monitor colleague Adnan Abu Amer wrote an article headlined, “Why donor countries are giving less to the Palestinians.” Examining the figures he cites from the PA’s budget, it is evident there has been a dramatic drop in international donations, which is making it difficult for the government to function. The only countries that met their 2015 financial commitments to the PA were Saudi Arabia ($240 million) and Algeria ($52 million). The two of them are not enough to keep the PA alive for very long.

This is where Saudi Arabia’s big rival, Iran, enters the picture. Last week, Iran's ambassador in Beirut, Mohammad Fathali, announced that Tehran will pay $7,000 to the families of each Palestinian who died committing attacks in Israel and an additional $30,000 each if Israel demolished their family homes.

Iranian assistance to the Palestinians has seen its ups and downs in the past. Still, this is the first time anything like this has been announced publicly, without fear of international censure. The reason could very well be that the nuclear agreement with the superpowers has already been signed.

A Palestinian Fatah source told Al-Monitor this week that Fathali’s statement can only be interpreted as a clear attempt by Iran to gain a foothold in the West Bank. According to him, the intent is so obvious, Iran isn't even trying to hide it.

It looks like Iran understands that what is happening now in the PA will have far-reaching, significant consequences. A full-blown intifada could shift priorities abruptly, and if Iran stakes a claim in the West Bank, it could influence the character of Palestine on the very next day. Iran’s interest in the region and its involvement in the Palestinian-Israeli conflict are nothing new, and Iran's past behavior gives some indication of the way it thinks.

When the PA was first established, Tehran transferred a few tens of millions of dollars to it per year — modest sums by Iranian standards. Once the second intifada erupted in 2000, Iran not only increased funding for PLO leader Yasser Arafat, it promised him weapons and ammunition to engage the Israelis in all-out war. Until then, Iran regarded Hamas as an impotent movement with no way of competing against Israel.

This attitude changed over time. Hamas suicide attacks during the second intifada earned it a reputation as the movement spearheading the uprising and diverted Iranian money from Fatah’s pockets to Hamas. New ties between Tehran and Gaza strengthened the group’s military wing, ultimately enabling it to throw the PA’s forces out of Gaza in 2007 and seize the territory for itself.

Now Iran is trying yet again to get a foothold in the West Bank. Its money will probably not go into the PA’s coffers, since the government is considered to be collaborating with Israel. Rather, it will go to individual families through Islamic welfare institutions that assist Palestinians in the occupied territories.

These institutions tend to be identified with Hamas and operate freely throughout the West Bank. Even when Hamas' relations with Iran chilled following the outbreak of the Syria war, Iran continued supporting the groups. Iran's generosity will make life much easier for the institutions and strengthen their influence across the West Bank. Therefore, while Abbas certainly understands the significance of an Iranian foothold in the territories, he is utterly unable to take on these “charitable” organizations.

Both Israel and Iran are fully capable of identifying the processes that will lead to the inevitable collapse of the PA. But while Iran is being proactive and investing resources to prepare for the day after, Israel is standing idle with its eyes tightly shut.

Many long years of diplomatic stalemate, the absence of any solution on the horizon and all of Israeli Prime Minister Benjamin Netanyahu’s efforts to prove to the world that Abbas is no partner could result in the situation Israel fears most: chaos in the PA and Iranian influence in the West Bank.

After years of warning the world about Iran, Netanyahu is now practically swinging the door wide open to allow Iranians into the PA. Those who did not want Abbas as PA chairman may yet find that it is the Iranians who will pick his successor.