As Israel commemorates the life of Prime Minister Menachem Begin, politicians are selectively using his legacy to boost their own images. 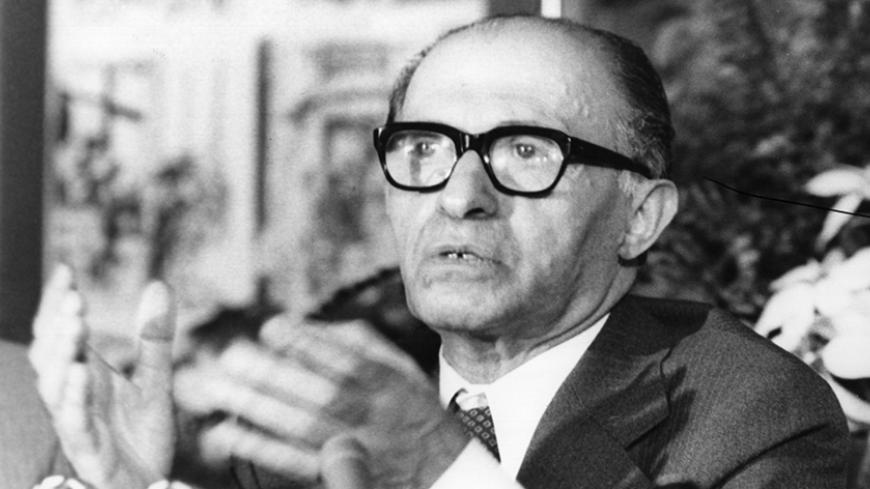 Almost 2½ decades have passed since the death of Menachem Begin, Israel’s sixth prime minister. Still, the former Likud leader who retired suddenly under rather inexplicable circumstances is making a comeback in Israeli politics. On March 9, which marked the 24th anniversary of Begin’s death, it was hard not to notice how politicians used Begin to boost their images.

It is a fascinating phenomenon. Begin's legacy has not only been adopted by Prime Minister Benjamin Netanyahu and other Likud leaders, but also by Kulanu chair and Finance Minister Moshe Kahlon and Yesh Atid Chairman Yair Lapid. But while Kahlon grew up in the Likud and admired Begin as a boy, Lapid’s connection to the right-wing leader is not particularly clear, considering that most of his supporters have center-left views. Nevertheless, even Lapid is making an effort to claim Begin as one of his own. What is it about Begin, the man considered responsible for the fiascos of the Lebanon War, that has made him into a banner to draw potential voters? Or perhaps more accurately, why do politicians think this of him?

To answer that question, it is worth looking at how Lapid uses Begin for his own purposes. In a March 11 Facebook post, he described a meeting he held in Ashkelon the night before. His hosts were the Zrihan family, which he described as having deep Likud roots. He wrote, “'Just like you,’ I told them, ‘I grew up in a home that worshiped Menachem Begin. His strength lay in his refusal to accept that something was impossible.' We can separate ourselves from the Palestinians. We can improve the education of our children. We can fight corruption. We can lower prices.”

It is not by chance that Lapid has turned himself into a Begin acolyte. As part of his effort to draw more moderate voters from the Likud, he is using the image of a right-wing national leader who was admired by Mizrahi Jews living in the Israeli periphery. With Lapid soaring in the polls, Begin's image is exactly what he needs to win the support of Likud Mizrahi voters. On the other hand, there is no real basis for Lapid to claim Begin’s legacy. It borders on a complete distortion of the former leader’s character and beliefs.

Why does Lapid admire Begin? For giving the settlement enterprise its momentum or for supporting autonomy for the Palestinians, which would allow them to decide whether they want Israeli or Jordanian ID cards? And what about Begin’s fiasco in Lebanon, when Defense Minister Ariel Sharon led Israel into an unnecessary war? Wasn’t that a leadership failure of the highest magnitude? The truth is that Lapid only chooses those features of Begin’s legacy that would help him build up his political power for the next election. It would come as no surprise if he were shown to run the key points past his pollsters first.

Nor does Lapid mention that Begin believed that protecting the rights of Israel’s Arab minorities was a supreme value. Begin was active against the military government over Israel’s Arab population, finally canceled in 1966. Israel's first Prime Minister David Ben-Gurion may have considered him a fascist, but on this particular issue, he displayed a more liberal worldview. But Lapid will never say so, because he is trying to distance himself from anything that could be perceived as leftist. God forbid anyone think of him as someone concerned with Arab rights.

Another political figure who needs to embrace the late leader is Finance Minister Moshe Kahlon. In the previous election last year, Knesset member Benny Begin attacked Kahlon for using his father’s memory in Kulanu’s campaign. When the Kulanu chairman argued that he was implementing Begin’s social legacy, contrary to what the Likud Party was doing, Begin’s son struck back, saying, “Beware of imitations.” According to Benny Begin, Kahlon was simply trying to steal votes from the Likud.

Last week, Kahlon returned to the scene of the crime. He marked the 24th anniversary of Begin’s death by writing a post on Facebook in which he called himself the re-embodiment of Begin as a social leader who has the suffering of the weaker sectors always in mind. “It is in the spirit of Menachem Begin that all of us in the Kulanu Party spend every day fighting against the monopolies and cartels that are trying to hinder us,” he wrote.

The problem is that Kahlon also adopts one particular aspect of Begin’s legacy while ignoring the bigger picture. Begin did show economic compassion. The crown jewel of his legacy was “Project Renewal,” in which he improved the quality of life in poorer neighborhoods and developing towns. At the same time, however, then-Finance Minister Yoram Aridor brought an economic catastrophe down on the country with policies that led to runaway inflation and a financial crisis. Begin did not fight against the monopolies or the banks. He did not have a comprehensive economic ideology, nor did he demonstrate any deep understanding of the subject.

While both Kahlon and Lapid are using Begin’s legacy as if it were their own, Netanyahu is not far behind them. In his speech to the Likud to mark the anniversary of the late leader’s passing, Netanyahu chose to emphasize the principles of the so-called iron wall and hard hand against security threats advocated by Begin. On the other hand, the hard decisions that Begin made underscore how difficult it is for Netanyahu to show real leadership. Begin ordered the bombing of Iraq’s nuclear reactor in 1981, after signing a peace agreement with Egypt just two years earlier. In his four terms in office, Netanyahu cannot point to any single achievement of that magnitude.

Controversial Culture Minister Miri Regev has also taken advantage of this opportunity. She used her Facebook page to describe Begin as a charismatic but modest figure who brought about change. In Regev’s case, it is safe to assume that Begin would be spinning in his grave had he known how responsible she would be for incitement against Israel’s Arab population. Attempts by other senior Likud officials to limit the role of the Supreme Court also run counter to Begin’s legacy, which supported the supremacy of the legal system, official state institutions and liberalism.

The distortion of Begin’s legacy and the selective aggrandizement of certain traits over others is evidence of how shallow some Israeli politicians really are. On the other hand, they also indicate that the public longs for bold leadership, preferably from the right. So Lapid, for instance, prefers Begin over late Prime Minister Yitzhak Rabin, even though Rabin’s positions more closely reflect the attitudes of Yesh Atid’s voter base. The problem is that today, at least, Rabin’s legacy doesn’t bring enough votes with it.