The Pew Research Center found in a survey conducted at the end of 2014 and in early 2015 that Israeli Arabs are much more religious than Jews, while most of those polled share the view that a two-state solution is slipping away. 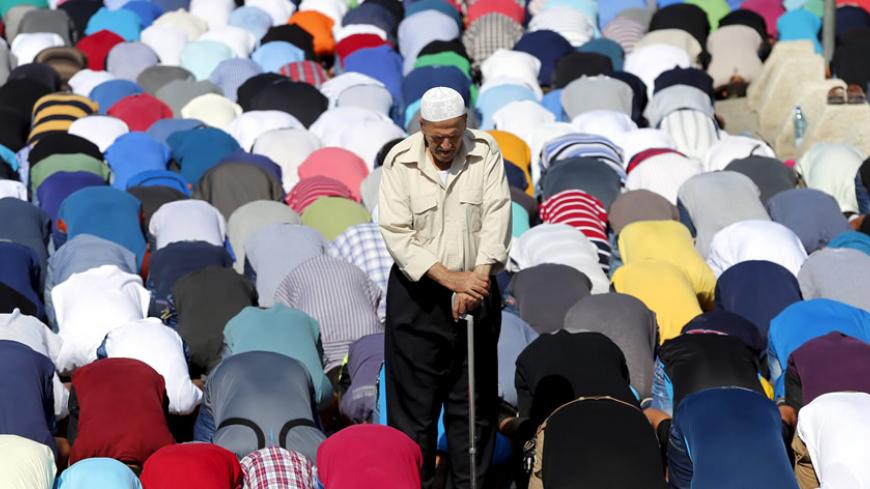 A substantial survey carried out in Israel, East Jerusalem and among Jewish settlers in the West Bank has shown that Arabs — Muslim, Christian and Druze — are much more religious than Israeli Jews.

The survey further noted that Muslims in Israel are the most religiously observant of the four major religious groups. “A majority (61%) of Muslims say they pray daily, compared with 34% of Christians, 26% of Druze and 21% of Jews. And while 25% of Druze, 27% of Jews and 38% of Christians say they attend religious services at least weekly, roughly half of Israeli Muslims (49%) report that they go to a mosque on at least a weekly basis.”

Pew found that only 15% of adult Muslims in Israel do not fast during Ramadan.

However, Alan Cooperman, director of Religion Research at Pew, told Al-Monitor that overall Arabs in Israel are less religious than in nearby Arab countries. He said, “While 59% of Lebanese Muslims are religious, the share of Muslims in Jordan is 85%, and the same in the Palestinian territories — while 82% of Iraqis say they are religious.”

Cooperman added that young Muslims and Christians in Israel are less religious than older Arabs. “Muslims in Israel between the ages of 18 and 49 are generally less observant than their elders. For example, those under 50 are less likely than older Muslims to say they pray daily or attend the mosque weekly,” he said.

Cooperman pointed out that the survey showed that members of all religious groups in Israel are clustered together and do not interact much with people from other religions. “Religion/ethnicity is not just a political fault line but a social fault line; they live in the same country but live a separate social life,” he said.

The survey found that 98% of Israeli Jews said that all or most of their friends are Jews; 75% of Muslims and 80% of Christians said that they are not comfortable with their sons or daughters marrying a fellow Arab from the other religion. According to Cooperman, intermarriage between Jews and Arabs is virtually nonexistent.

The Pew survey titled “Israel’s religiously divided society” includes interviews with 3,789 Jews, 871 Muslims, 468 Christians and 439 Druze. An additional 34 respondents belong to other religions or are religiously unaffiliated. The face-to-face survey in multiple languages including Arabic, Hebrew and Russian was conducted between October 2014 and May 2015.

A worrisome finding came out of the Pew survey in terms of political attitudes toward the other. The survey reported that nearly half of Israeli Jews say Arabs should be expelled or transferred from Israel, including roughly 1 in 5 Jewish adults who strongly agree with this position.

Pew researchers asked Jews whether they strongly agree, agree, disagree or strongly disagree with the statement that “Arabs should be expelled or transferred from Israel.”

The survey reported that “roughly half of Israeli Jews strongly agree (21%) or agree (27%).”

On the other hand, Palestinian citizens of Israel appear to have hardened their positions in regard to the possibilities of a peaceful outcome of the Arab-Israeli conflict. “Arabs in Israel have become increasingly doubtful that a way can be found for Israel and an independent Palestinian state to coexist peacefully. As recently as 2013, roughly three-quarters of Israeli Arabs (74%) said a peaceful two-state solution was possible. As of early 2015, 50% say such an outcome is possible,” the survey concluded.

The issue of discrimination received much attention in the survey with roughly 8 in 10 Arabs (79%) telling the researchers that there is a lot of discrimination against Muslims in Israel today, while just 21% of Israeli Jews share this view.

When it came to personal experiences of discrimination, about 1 in 6 Muslims say they have been questioned by security officials (17%), prevented from traveling (15%), or physically threatened or attacked (15%) because of their religion in the past 12 months, while 13% say they have suffered property damage.

Cooperman noted that the Arab minority in Israel talks about other forms of discrimination against women and Mizrahi (Middle Eastern) Jews. “We find this in other countries: Minority groups that feel discriminated against are more likely to feel discrimination in all forms and against different groups,” he said.

When it comes to the peace process, Cooperman said he was intrigued by the fact that Arabs in Israel criticized the Palestinian leadership. “While 72% of Arabs said that the Israeli government is not sincere about peace and the two-state solution, a substantial 40% said Palestinians leaders are also not sincere.”

Cooperman added that while most Jews blamed Palestinian leaders for the failure of the peace process, 40% conceded that Israeli leaders are not sincere.

To those following the Palestinian-Israeli conflict and current political and religious trends in Israel, the findings of the Pew research study confirm some of the fear that peace is slipping away. The increase in support for racist attitudes, such as expelling Arabs from Israel, plays clearly into the hands of hard-line Israelis who have very little interest in a historic peace deal based on compromise and the two-state solution. Year after year, surveys of attitudes in Israel reflect a more religious intolerance and, therefore, a more difficult path to peace and coexistence.