Has the US found a new friend in Iraq's Shiite militias?

Despite its earlier fears that Iraq's Popular Mobilization Units would assume a sectarian role in the liberation of Sunni areas from the Islamic State, the United States is now expressing support for the force. 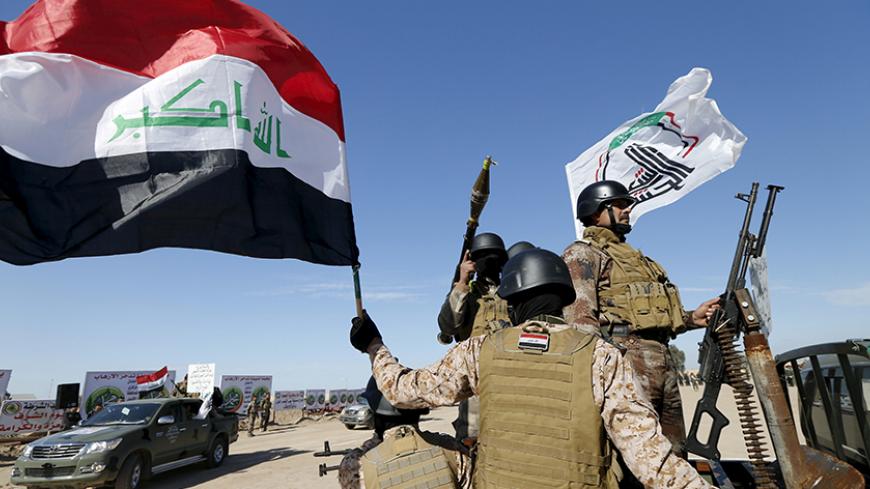 On March 12, US Consul General Steve Walker visited Al-Sadr Teaching Hospital in Basra to pay his respects to wounded members of the Popular Mobilization Units. The visit marked the first time a US official has publicly met these troops. This is particularly remarkable as until now, the official US position toward the Popular Mobilization Units was negative, and the United States had even demanded that the Iraqi government prevent the forces from taking part in the operations to liberate some areas, such as the city of Ramadi in Anbar, that were freed without their participation by US request.

Walker made it clear that the trip was not just a courtesy visit. Accompanied by TV stations such as the US-based Alhurra, which broadcast the visit and his remarks in Arabic, Walker said, “The US recognizes the important contribution of the Popular Mobilization Units under the command of Prime Minister [Haider al-Abadi], and most of the Popular Mobilization troops came from the south. This is why I would like to express my condolences to the people of Basra and the south who have lost their loved ones or friends in the war against the Islamic State.”

Walker expressed his solidarity with the wounded, who welcomed his visit. He told them, “The US and Iraqi people are very, very proud of you.”

However, on Feb. 19, Abadi told the parliament that the Popular Mobilization Units will join in the operation to liberate Mosul, and that he will not surrender to pressure exerted by any of the parties to prevent the force from taking part in the battle for Mosul.

Regional powers have joined the debate. On Jan. 23, Saudi Ambassador to Baghdad Thamer al-Sabhan called the Popular Mobilization Units a sectarian organization with a criminal agenda. His remarks sparked large-scale criticism in the Iraqi street.

Some observers feel that Walker’s visit and remarks reflect a great shift in the US alliances in the Middle East. Following Iran’s nuclear deal, US policy has clearly changed, moving away from its old friends in the region, most notably Saudi Arabia, and closer to Iran.

In an interview with The Atlantic on March 12, US President Barack Obama criticized Saudi Arabia, which “heavily funded Wahhabist madrassas, seminaries that teach the fundamentalist version of Islam.” When asked whether Saudi Arabia is a friend of the United States, he answered, “It’s complicated.” Obama added that the Saudis need to “share” the Middle East with their Iranian foes.

The United States seems to have become more aware of the nature of Iraqi actors like the Popular Mobilization Units. In May 2015, the special presidential envoy for the global coalition to counter IS, retired Gen. John Allen, told CBS News, “The militias are not just a single monolithic entity. There are the militias that you and I are used to hearing [about] that have close alignments with Iran. Those are the extremist elements, and we don’t have anything to do with that. But there are elements of the [Shiite] militias that volunteered last year to try to defend Iraq from the onslaught of [IS] who were called to arms by Grand Ayatollah [Ali al-] Sistani, and those elements, or the Popular Mobilization Force, as they are known, have been subordinated to the Iraqi higher military campaign or command.”

Allen concluded that the United States is going to need to assume a positive role in supporting the force in order to defeat IS.

Nevertheless, some factions within the Popular Mobilization Units still have doubts regarding the new US attitude. In a statement, Muqtada al-Sadr, head of the renamed Peace Brigades (formerly the Mahdi Army), condemned Walker’s visit and criticized stances favoring the visit by politicians and even parties within the organization without naming them.

Al-Monitor interviewed Norman Ricklefs, CEO of Iraq Advisory Group and former adviser to the secretary-general of the Iraq's Defense Ministry and senior adviser to the Interior Minister. He said, “The Popular Mobilization Units proved to be efficient and gradually evolved into a more regular force than it was in the past, especially after the operations to liberate Tikrit. It is important and very good to see that the Popular Mobilization Units are increasingly being recognized within international circles. Yet these units need to welcome international support, lower their hostility to the US and make greater efforts to achieve administrative and legal integration in the official Iraqi military forces.”