As maintenance work continues to ensure the structure stays strong, those residing near the Mosul dam live in fear of both flood waters and the terror group. 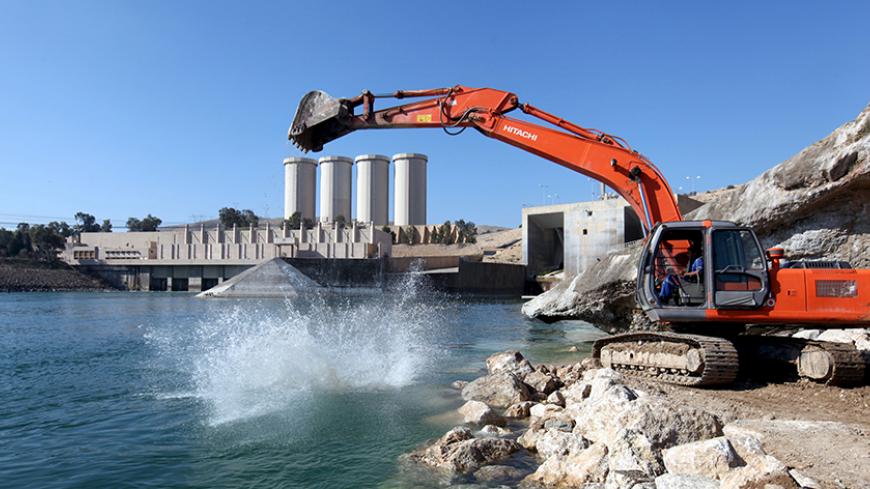 MOSUL DAM, Iraq — The day Al-Monitor visited the Mosul Dam in northern Iraq, a team of engineers from Baghdad was making topographical measurements on the side of the site facing the lake. “Well, at first glance there seems to be no problem," Ali Faisal, a surface engineer, said. On the other side of the dam, ducks swim in the sun, lulled by the lapping water and whispering wind. If it weren’t for the sound of heavy machines drilling a soil so unstable it could kill thousands, the scene would be idyllic.

The Mosul Dam, formerly known as Saddam Dam, may have become a greater threat than the self-styled Islamic State (IS); that is, if one refers to the alarming warnings sent by US officials to their Iraqi counterparts. On Feb. 28, the US Embassy in Baghdad issued a frightening statement proclaiming that the Mosul Dam, Iraq’s largest, “faces a serious and unprecedented risk of catastrophic failure with little warning.”

Depending on the side from which one is looking at it, the 2.2-mile-long (3.6 kilometer) hydroelectric dam looks either like a spaceship sinking into a sky blue sea or a hill populated with a handful of trees. However, its gigantic size and steady appearance is no guarantee of robustness.

A rupture would create an inland tsunami-like wave that could result in “severe loss of life, mass population displacement, and destruction of the majority of infrastructure,” the US fact sheet reads.

According to the US Embassy, some models estimate that IS-held Mosul and its 1 million inhabitants, located about 40 kilometers (25 miles) southeast of the dam, could be flash flooded by as much as 21 meters (70 feet) of water within hours of the breach. Downriver cities such as Tikrit, Samarra and Baghdad (including the capital’s international airport) could be inundated with “significant” levels of flooding in less than three days.

In 2007, the US Army Corps of Engineers had already qualified the Mosul Dam as the “most dangerous dam in the world.” Now, the United States warns that 500,000 to 1.47 million Iraqis residing along the Tigris River would not survive the impact of such a huge wave of water unless they evacuate the flood zone.

Since IS seized large territories across Iraq in summer 2014, maintenance teams have for a time struggled to gain access to the site. In August 2014, the jihadis took control of the dam before losing it less than two weeks later at the hands of Iraqi forces and Kurdish peshmerga fighters, supported by US-led coalition airstrikes.

“It was a strategic place for them. That’s why it was very important that we take it back,” peshmerga Col. Adnan Osman Saleh told Al-Monitor. For the Kurdish officer, the dam represents one of Iraq’s most vital key sites as it provides irrigation, water supply and hydropower for millions. It is also one of the most precarious.

“There is an enormous amount of water behind this dam. If something happens, if there is a disaster, the lives of millions will be at stake. That’s why it is so strategic,” Saleh said.

According to the United States, the disruption of maintenance operations by IS militants has increased the risk of the dam collapsing.

The consensus among expert panels is that the embankment was constructed well and is not the cause for concern. However, the foundation is. The edifice has suffered from structural flaws since its construction as the bedrock upon which it was built is composed of gypsum, anhydrite and limestone, each of which is water soluble, hence undermining the dam’s core with growing cavities.

Since the dam's completion by a German-Italian consortium in 1984, Iraq has sought to fill in the holes developing under the structure with a mixture of cement and other additives, a process known as grouting.

“We inject cement continuously. We work in three shifts: morning, evening and night,” Azim Ibrahim told Al-Monitor. Ibrahim, a technician who has been working at the dam since 2001, confessed that a breach is “possible.”

According to the US Army Corps of Engineers, the dam would fail without continuous injections of grout into the cavities. On March 2, the Italian Trevi Group signed a contract with a total value of 273 million euros (around $300 million) to assure the maintenance and safety of the Mosul Dam. Along with the 450 Trevi technicians and staff, 450 Italian soldiers will be deployed to Iraq to protect the site.

Despite the scheduled arrival of nearly a thousand foreigners, Kurdish military officials, who are in charge of security, remain confident that the Mosul Dam poses no existential threat.

“If there was any danger, we wouldn’t be here right now,” Brig. Gen. Bahjat Taymes told Al-Monitor. According to the peshmerga officer, 2,000 Kurdish fighters are currently positioned within the path of the projected flood wave.

For Taymes, the real threat is not the dam's unstable foundation, but the enemy standing 20 kilometers (12 miles) away from it. "If this dam falls in the wrong hands, it could be dangerous," he said.

For the civilians caught between the Mosul Dam and IS-held territories, there is a similar sense that the mortar shells falling today are a bigger concern than a flood that may happen tomorrow.

As the sun sets, lights start sparking on the other side of the trench carved by the peshmerga forces. The first IS positions are only a stone's throw from the Arabic town of Aski Mosul, where rockets landed three days ago.

Aski Mosul is next to the Tigris River, which flows into the self-proclaimed IS caliphate, and the town's inhabitants are both threatened by the muddy water and the insurgents’ deadly blaze. “Right now, IS members are three or four kilometers away from us, behind the mountain,” Mahmoud Abdulmueen, a father of four, told Al-Monitor.

“We now have the enemy in front of us and the deep sea behind us,” he said, citing the speech of Tariq ibn Ziyad. Perhaps never before was the Muslim general who led the Umayyad Caliphate conquest of Spain quoted so adequately. “We are trapped,” Abdulmueen added.

On the other side of Aski Mosul, inside a building that she shares with a cow, Saba (who did not reveal her full name) has yet to close her shop. Packed with perfumes and inviting lingerie, she believes her tiny business is here to stay. “It’s not true, the dam will not explode,” she said, adding that if a breach occurs after all, she and her family would seek safety on top of the surrounding mountain. “There is enough place for everyone. If the dam leaks, we will be fine,” she said.

For the fierce mother and business owner, the actual menace lies on the other side of the hill, where her satin nighties are a scarce commodity. “IS is more dangerous than the dam. IS kills and cuts hands. IS puts people in jail and shoots them in the head. The water is no harm, we are not afraid of it,” she said. “What we fear is IS.”