Is this Iranian man charged in US actually a 'hostage'?

After an Iranian man was charged in a US court for violating laws on Iran, a conservative analyst accused the United States of seeking to obtain the release of two Iranian-Americans held in Iran. 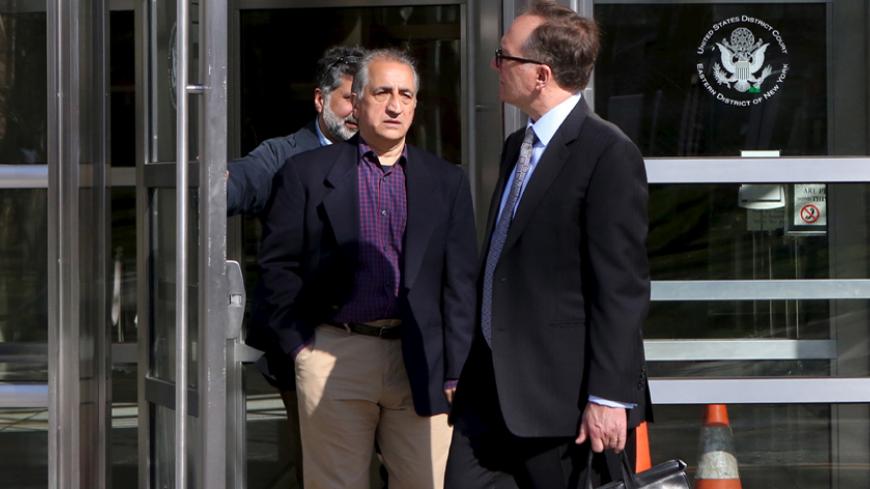 On March 23, federal prosecutors revealed that an Iranian man who had been acting as a consultant to Iran’s mission to the United Nations in New York had been charged with violating US laws related to Iran. A number of Iranian websites have published analyses that the US’ primary goal in the arrest is to do another prisoner swap.

According to Reuters, Ahmad Sheikhzadeh was accused of receiving “a cash salary by the Iran mission” that was deposited in a Citibank account. The indictment says that “he also used that account for side transactions with two US-based co-conspirators who wished to invest in Iran.”

Sheikhzadeh, who is 60 and according to his attorney has been living in the US since he was 18, was charged with conspiracy to evade US sanctions against Iran, money laundering and helping arrange false tax returns.

“The arrest of Ahmad Sheikhzadeh, consultant to Iran’s mission to the United Nations on behalf of American prosecutors is a type of hostage taking,” wrote one of the most prominent conservative voices in Iran, Mehdi Mohammadi, who was an adviser to former hard-line nuclear negotiator Saeed Jalili. Mohammadi continued, “I think the prime goal of this hostage taking is for the freedom of the Namazis [Siamak and Baquer], people who the Americans call the biggest source of information on Iran in the last decade.”

Iranian-American businessman Siamak Namazi, who was based in Dubai, was arrested in October by the Intelligence Organization of the Islamic Revolutionary Guard Corps while visiting Tehran. His father Baquer, a former senior UNICEF official who is 80 years old, was arrested in February.

It is not certain why Mohammadi believes that the United States views the Namazis as a source of intelligence. The last time the US government addressed their case was on March 18, when State Department spokesman John Kirby said the United States views that “both reported detentions are unjust.” Kirby added, “We call on Iran to allow consular access by Swiss authorities and to release both as soon as possible.”

Iran and the United States last exchanged prisoners in January, just after both sides announced the implementation of the nuclear deal. Four Iranian-Americans held in Iran were released in exchange for the pardoning of seven Iranians in the United States, most of whom were charged with violating sanctions on Iran. While a possible exchange of Sheikhzadeh, if he ever is convicted, for the Namazis would fit this previous pattern, it is far from a certainty given the unique circumstances of that exchange.

Regardless of the reduction in tensions between Iran and the United States in the last two years, in Mohammadi’s view, “The United States has entered a new phase of intelligence-security confrontation with Iran in which its economic role is prominent.” Mohammadi believes this is why US President Barack Obama in February 2015 tapped David Cohen, former undersecretary for terrorism and financial intelligence, to become the deputy director of the CIA. Cohen has been called the “principal architect” of the economic sanctions on Iran.

Interestingly, the assistant US attorney in Sheikhzadeh’s case, Tali Farhadian, was also born in Iran. Farhadian’s marriage to Boaz Weinstein, whose mother is Israeli, prompted Mohammadi to claim that Sheikhzadeh’s arrest has also been set up in a manner in which “Zionists are linked.”

Taking a jab at President Hassan Rouhani and Foreign Minister Mohammad Javad Zarif, who had a positive and friendly relationship with US Secretary of State John Kerry during the nuclear negotiations, Mohammadi concluded, “Let’s see what reaction Mr. Kerry’s friends in Tehran show.”