Is Iran's Ahmadinejad ready for a comeback?

With merely 15 months until Iran’s next presidential vote, Mahmoud Ahmadinejad may be gearing up to confront incumbent President Hassan Rouhani. 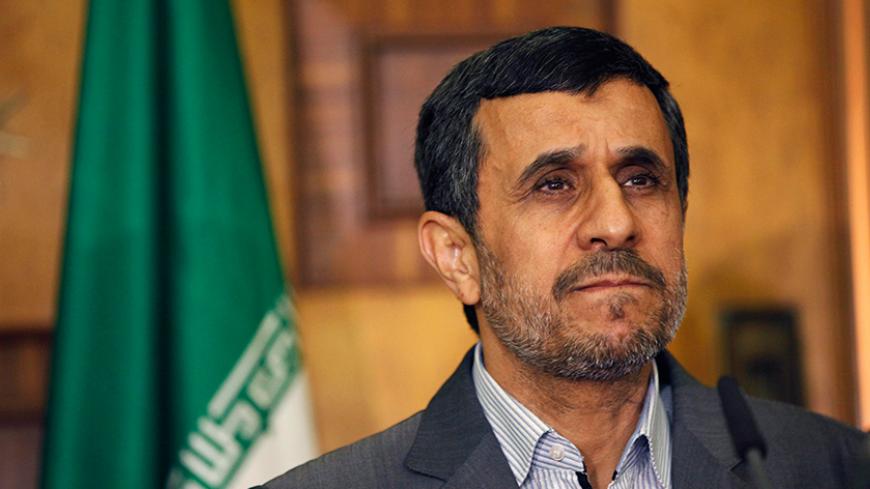 TEHRAN, Iran — When Iran’s former President Mahmoud Ahmadinejad stepped aside in 2013 — after eight years in office — it was clear that he had serious plans for his future. In fact, he had indicated this in a TV interview one year before leaving office, by pointing to his possible presence in Iran’s next government. The disqualification of his Vice President, Esfandiar Rahim Mashaei, from the 2013 presidential race, however, prevented this dream from becoming reality.

But despite the disqualification of Mashaei, Ahmadinejad had no intention to leave the stage. Soon, he came up with a special plan for the recently held parliamentary elections. In an interview last year, one of his advisers, Abdolreza Davari, revealed that a 5,000-strong cadre had been trained for parliament during Ahmadinejad's time in office. It also came to light that the former president was holding weekly meetings with his previous ministers and advisers in a building in Velenjak, a district in northern Tehran. One of his foreign policy advisers who spoke on condition of anonymity told Al-Monitor, “I take part in meetings every Sunday. These sessions are often held on foreign policy issues, but they are not the only meetings. Other individuals in Ahmadinejad’s inner circle hold similar gatherings on different days. Of course, Ahmadinejad had no serious plans for the parliamentary elections from the start, and his mind is on the 2017 presidential poll instead.”

The source added, “Once I asked him if he had any plans for directly entering the parliamentary stage. His response was ‘no.’ He said, ‘In government, I was the only person and they created so many problems for us. In parliament, it will be me with 289 other members of parliament. Naturally this will be more difficult.’”

Prior to Iran’s Feb. 26 parliamentary elections, Ahmadinejad had predicted that the Principlists would suffer a heavy loss, and that even the Reformists’ third-rate cadres would be able to defeat the Principlists’ weak list of nominees — a prediction that proved to be true.

Meanwhile, a look at the performance of the groups close to Ahmadinejad in the recent parliamentary elections shows they were not lacking a plan either. These groups have managed to get their own candidates elected into parliament through small towns. In fact, 11 of Ahmadinejad's former ministers, advisers, deputies and high-ranking managers have found their way into parliament’s next term through these towns.

Indeed, soon after the election results for Tehran were announced, an intense wave of joy and happiness was witnessed among the groups linked to Ahmadinejad. Posters began circulating online, bearing the slogan “The Principlists are nothing without Ahmadinejad.” In addition, numerous articles written by Ahmadinejad’s friends and allies started popping up on different websites, arguing that the main reason for the Principlists’ heavy loss — especially in Tehran — was caused by the fact that they had distanced themselves from the former president — a point that was also stressed by Ali Akbar Javanfekr, Ahmadinejad’s former adviser for press affairs. With all the parliamentary leaders of the Principlist movement eradicated in Tehran, analysts began to talk about a Principlist return to Ahmadinejad. Sadegh Zibakalam, an Iranian university professor and analyst said, “The Principlists do not have the power to return to power without Ahmadinejad.”

This idea has, however, not been met warmly within the Principlist movement. In an editorial published on the Khabar Online news website, Mohammad Mohajeri, former editor-in-chief of hard-line newpaper Kayhan, wrote that the main reason that the Principlists lost in the recent parliamentary elections was Ahmadinejad’s first election as president in 2005. Saeed Ajorloo, the editor of the Principlist magazine Mosalas, also referred to the idea of the Principlists turning back to Ahmadinejad as the worst possible thing.

Moreover, in another editorial, Hossein Kanani Moghaddam, the founder of the Green Party, described the main reason for the Principlist loss in the elections as the cost inflicted on their reputation by Ahmadinejad. Yet despite all this, one should not forget that Ahmadinejad is good at playing the political game — especially when it comes to the public. By relying on this strength alone, he has managed to get his people into the next parliament, while the Principlists have failed to even predict the defeat that was awaiting them.

It is possible that Ahmadinejad is now preparing to enter the 2017 presidential race himself, which could pit him against incumbent President Hassan Rouhani. Speaking on condition of anonymity, the foreign policy adviser to Ahmadinejad told Al-Monitor, “I once told Ahmadinejad that it was unlikely that he would get votes and that it is best that he forget about the presidency. He got upset and told me that I only saw Tehran and other big cities, while he enjoyed high popularity in smaller towns.”

Except for Abolhassan Bani Sadr, the first president after the 1979 Islamic Revolution who was impeached by parliament less than two years into his term, all other presidents in the history of the Islamic Republic have served two terms in office. Based on this and the high voter turnout in the recent parliamentary elections — an indication of public satisfaction with Rouhani’s performance — it will be somewhat risky for Ahmadinejad to enter the 2017 presidential race, in which he would likely have to run against Rouhani, who has the success of the nuclear negotiations behind him.

Thus, maybe it is best for Ahmadinejad that he wait another four years and instead run in the 2021 presidential vote. However, some analysts believe that Ahmadinejad’s actions show that he does not intend to wait. Others believe that his tendency to go against the norm — such as his 11-day sulk in 2011 when he refused to show up for work after failing to dismiss his minister of intelligence, or his insistence on supporting Mashaei despite strong criticism from the Principlists as well as clerics — will prompt the establishment to prevent his return.

Saeed Laylaz, an Iranian journalist and economist, told Al-Monitor, “Whether the establishment allows Ahmadinejad to return or not is not important. We have to prevent this ourselves by closing the holes through which he could return, such as manipulating the weaker [social] class and the economically vulnerable and pulling them toward him, something that Mr. Rouhani has until now managed to do well.”