Trump no longer 'neutral' on Israel 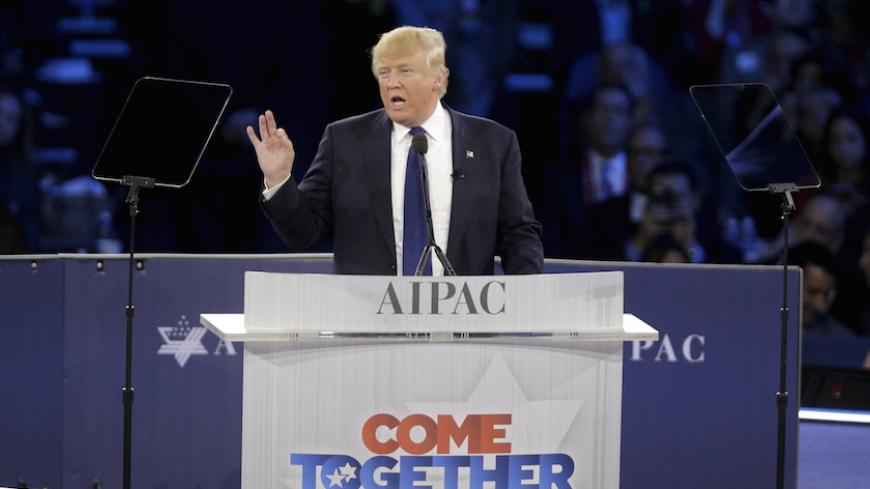 WASHINGTON — Democratic and Republican presidential hopefuls competed March 21 to prove who is more pro-Israel at the annual convention of the American Israel Public Affairs Committee (AIPAC) in a show of political correctness that extended even to real estate magnate Donald Trump.

Trump, the Republican front-runner who has raised eyebrows in debates and interviews by asserting that he would be “neutral” in peace talks between Israelis and Palestinians and questioning US aid to the Jewish state, executed a 180-degree turn as he delivered what appeared to be his first prepared campaign speech before an enthusiastic crowd of 18,000 at a Washington sports arena.

After asserting, “I didn’t come to pander,” he ran through a series of positions that closely follow the policies of the current Israeli government on Iran, the Palestinians and recognition of Jerusalem as Israel’s capital. He also vowed to “totally disband Iran’s global terrorist network” without defining it or specifying how he would accomplish that goal.

Trump asserted that he was a “lifelong supporter and true friend of Israel,” but the evidence he cited was thin. Trump said he lent his private plane to New York Mayor Rudy Giuliani to visit Israel after the Sept. 11, 2001, attacks and was grand marshal in the 2004 Israel Day parade in New York City. “Many people turned down this honor,” Trump said, adding, “I took the risk and I’m glad that I did,” although failing to explain what was risky about walking down Fifth Avenue in a city with a large Jewish population.

On the Palestinian issue, Trump said, “To make a great deal, you need two willing participants,” noting that Palestinians had turned down three prior Israeli and American offers. “The days of treating Israel like a second-class citizen will end from day one,” should he be elected, Trump said.

Trump, who has previously said he would keep the recently implemented nuclear agreement with Iran but “police that contract so tough that [the Iranians] don’t have a chance,” hardened his position before AIPAC. He called the deal “catastrophic for America, Israel and the whole of the Middle East,” and stated, “My first priority is to dismantle this disastrous deal on Iran.”

Along with fellow Republican contenders John Kasich and Ted Cruz, Trump vowed to move the US Embassy in Israel from Tel Aviv to Jerusalem as a “clear signal that there is no daylight between America and our most reliable ally.” US candidates have frequently made this pledge, but no president has carried it out for fear of prejudicing peace talks in which the final status of Jerusalem would be a key issue. Cruz, a senator from Texas, noted that point and said that unlike other candidates, “I will do it,” if elected president.

Cruz has repeatedly said that he would tear up the Iran nuclear deal on the first day of his presidency. He warned the Islamic Republic to “shut down your nuclear program or we will shut it down for you.” He added that if Iran were to conduct another ballistic missile test on his watch, “We will shoot that missile down.”

Kasich said he would suspend the nuclear deal because of the missile launches, although they do not violate the nuclear accord.

Democrat Hillary Clinton, who began back channel talks with Iran when she was secretary of state, defended the nuclear agreement while blasting what she called “Iran’s aggression across the region.” She promised to stop Iran from getting a nuclear weapon, “with force if necessary,” and to respond with more sanctions to the missile launches, which she called a “serious danger” that “demands a serious response.”

Clinton, who spoke in the morning, hours before the Republicans, gave a pre-rebuttal of her GOP rivals. “Tonight you will hear a lot of rhetoric from other candidates about Iran, but there’s a big difference between talking about holding Iran accountable and actually doing it,” she said. “Our next president has to be able to hold together our global coalition and impose real consequences for even the smallest violations of this agreement.”

However, Clinton agreed with the Republicans that the United States should oppose any attempt by outside parties, including the UN Security Council, to impose a territorial compromise on Israel. Trump said he would veto such a resolution “100%” while Cruz said he would “fly to New York to personally veto it myself.” All the candidates condemned Palestinian leaders for implicitly inciting attacks on Israeli civilians by glorifying dead Palestinian assailants as martyrs.

Speaking two days before Jews celebrate Purim, a holiday that celebrates Jewish survival during the reign of a hostile Persian king, Clinton invoked both the biblical Queen Esther and modern Israel’s only female prime minister as apparent role models. “Some of us remember a woman, Golda Meir, leading Israel’s government decades ago and wonder what’s taking us so long here in America,” Clinton said to laughter and applause.

Clinton devoted much of her speech to skewering Trump without using his name. Over and over, she said that no responsible American politician could be “neutral” when it comes to Israel’s security. “We need steady hands, not a president who says he’s neutral on Monday, pro-Israel on Tuesday and who knows what on Wednesday, because everything’s negotiable,” Clinton said. “Well, my friends, Israel’s security is non-negotiable.”

Clinton also inveighed against bigotry in a clear reference to Trump’s remarks against Muslims and Mexicans and seeming willingness to accept support from white supremacist groups. She reminded the audience of 1939, when a ship carrying 1,000 Jewish refugees from Nazi Germany was denied entry to the United States and sent back to Europe. “Americans should be better than this,” Clinton said. “If you see a bully, stand up to him.”

J Street, a rival Jewish organization to AIPAC, also criticized Trump in a statement. “Sadly, Mr. Trump’s campaign to date, characterized as it has been by outrageous and alarming attacks on immigrants, Hispanics, women and other groups as well as his call for a total ban on Muslims entering the United States, runs diametrically counter to the values J Street espouses,” the statement said.

A group of 40 rabbis boycotted Trump’s speech and decried the racial and ethnic hatred stirred up by the New Yorker’s campaign. The Anti-Defamation League did so as well and announced that it was “redirecting” donations from Trump to anti-bullying and anti-discrimination efforts.

All the candidates got rousing receptions from the AIPAC audience. While about 200 people demonstrated against Trump outside the conference, there were no visible protests inside the arena, where security was tight.

Clinton’s sole competitor for the Democratic nomination, Vermont Senator Bernie Sanders, skipped the AIPAC meeting so he could campaign in western states that hold primaries March 22. He outlined his views on the Middle East in a lengthy statement.

The only Jewish candidate in the race, Sanders, who spent time on an Israeli kibbutz in his youth, said that “real friendship” with Israel requires friends “to speak the truth as we see it … especially in difficult times.”

He promised to “work tirelessly to advance the cause of peace” not only by being a friend to Israel, “but to the Palestinian people, where in Gaza, they suffer from an unemployment rate of 44% — the highest in the world — and a poverty rate nearly equal to that.”

On Iran, he expressed support for the nuclear deal but added, “If Iran does not live up to the agreement, we should re-impose sanctions and all options are back on the table.”

Sanders was the only candidate to mention Iran’s recent elections, which he called “a small step in the right direction,” saying, “I was heartened by the results of the recent parliamentary elections in which Iranian voters elected moderates in what was, in part, a referendum on the nuclear deal.”

Sanders was also alone among the contenders in suggesting “a more balanced approach toward Iran” in regional diplomacy. “We have serious concerns about the nature of the Iranian government,” he said, “but we have to be honest enough to say that Saudi Arabia — a repressive regime in its own right — is hardly an example of Jeffersonian democracy.”