Will the next US president scrap the Iran deal?

All the candidates in the US presidential election are hawkish on Iran, but leading Democrats support the Joint Comprehensive Plan of Action. 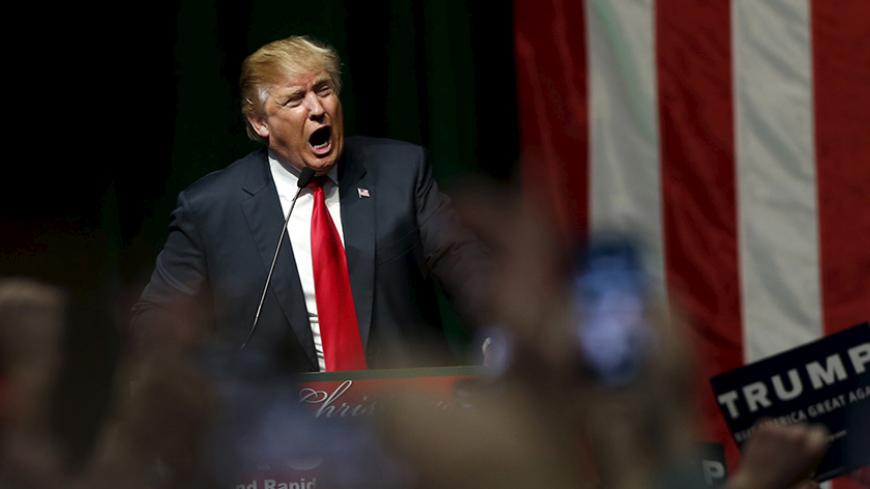 Iranians are likely to be nostalgic about the presidency of Barack Obama no matter who succeeds him in 2017.

While Democrats running for their party’s nomination all support the nuclear deal with Iran negotiated by the Obama administration, the leading candidate — former Secretary of State Hillary Clinton — lists “Iran’s continued aggression” as the second-most disturbing trend in the Middle East. Republicans are more negative, with Sen. Ted Cruz of Texas — now the front-runner for the Iowa caucuses — threatening to scrap the Joint Comprehensive Plan of Action on his first day in office if elected president.

The following are the positions of seven major candidates:

At the last Republican debate of 2015, Trump, who leads Republicans in national polls, said he “certainly would never have made that horrible, disgusting, absolutely incompetent deal with Iran where they get $150 billion. They're a terrorist nation.” In an earlier debate on Sept. 16, the New York real estate magnate called the agreement “one of the worst contracts of any kind I've ever seen.”

However, unlike Cruz, Trump has not threatened not to implement the accord. He said on NBC’s "Meet the Press" on Aug. 16, “OK, I’ve heard a lot of people say, ‘We’re going to rip up the deal.’ It’s very tough to do when you say, ‘Rip up a deal.’ … But I will police that deal. … I would police that contract so tough that they don’t have a chance.”

Speaking in the Sept. 16 debate, the freshman Republican senator from Texas said the Iran agreement “abandons four American hostages in Iran, and this deal will only accelerate Iran's acquiring nuclear weapons. You'd better believe it. If I am elected president, on the very first day in office, I will rip to shreds this catastrophic Iranian nuclear deal.”

At a rally Sept. 9 against the accord, Cruz said preventing Iran from acquiring a nuclear weapon was “the single greatest national security threat facing America.” Cruz also asserted that once the agreement goes into effect, “the Obama administration will become, quite literally, the world's leading financier of radical Islamic terrorism.”

In the Dec. 15 debate, Iran receded as a topic and the threat of terrorism from the group that calls itself the Islamic State dominated the conversation. However, Cruz, while pledging not to send American troops abroad to overthrow secular dictators, said at one point in an aside, “A regime we should change is Iran … because Iran has declared war on us.”

In a Sept. 11 interview with conservative radio talk show host Hugh Hewitt, the retired pediatric neurosurgeon said, “My biggest problem with the whole Iranian situation is that I believe that the Congress should have never agreed to anything outside of a treaty.”

If elected, Carson said, “I think we let the Iranians know that there’s a new sheriff in town, and that we’re not abiding by that, and we begin to use whatever powers we have to slow down the process. But you know, this is a longer-term problem, because our allies right now don’t have a whole lot of respect for us. … We’re going to have to very quickly get back to a point where people actually believe what we say, that our friends recognize that we’re their friends and that our enemies recognize that we’re their enemies. And there has to be consequences for being an enemy of the United States.”

In the Sept. 16 debate, the first-term Republican senator from Florida did not say precisely what he would do about the JCPOA as president, but expressed doubt that Iran would abide by the agreement.

“Anyone who is paying attention to what [Supreme Leader Ayatollah Ali] Khamenei says knows that they will not comply,” Rubio said. “In the middle of negotiating this treaty, Khamenei led the assembled masses in chanting ‘Death to America.’ … We need a commander in chief who will stand up and protect this country. And I'll tell you, I can't wait to stand on that debate stage with Hillary Clinton and to make abundantly clear if you vote for Hillary, you are voting for the Ayatollah Khamenei to possess a nuclear weapon and if you elect me as president, under no circumstances will a theocratic ayatollah who chants 'Death to America' ever be allowed to acquire a nuclear weapon.”

Similarly to Trump and Rubio, the former Florida governor has not threatened to immediately scrap the nuclear deal, while at the same time not expressing support for it.

“It's not a strategy to tear up an agreement,” Bush said in the Sept. 16 debate. “A strategy would be, how do we confront Iran? And the first thing that we need to do is to establish our commitment to Israel, which has been altered by this administration. And make sure that they have the most sophisticated weapons to send a signal to Iran that we have Israel's back. If we do that, it's going to create a healthier deterrent effect than anything else I can think of.”

The former secretary of state, who initiated secret talks with Iran while she was in office, has expressed support for the agreement while vehemently opposing Iran’s other policies. At a forum at the Brookings Institution on Dec. 4, Clinton listed three worrisome trends in the Middle East. The first, she said, was “a rising tide of extremism” and “the second is Iran’s continued aggression.” (The third was what she called “the growing effort to delegitimize Israel on the world stage.")

Accusing Iran of having its “fingerprints … on nearly every conflict across the Middle East,” Clinton and her administration would “embed” vigorous enforcement of the JCPOA “in a larger effort to counter Iran across the region.” Accusing Iran of testing US resolve by firing a ballistic missile in violation of a UN Security Council resolution, Clinton added, “We have to respond to these provocations, including, if necessary … taking military action.” Clinton would also challenge Iranian policies in Syria by establishing a no-fly zone on the border with Turkey.

The Vermont senator agrees with Clinton that the nuclear agreement is not perfect, but has said he would implement it.

“Does the agreement achieve everything I would like? No, it does not,” Sanders said in a Sept. 9 statement. “But to my mind, it is far better than the path we were on — with Iran developing nuclear weapons capability and the potential for military intervention by the US and Israel growing greater by the day.”

The self-described Democratic Socialist also echoed Clinton’s position by saying, “Let us not forget that if Iran does not live up to the agreement, sanctions may be reimposed. If Iran moves toward a nuclear weapon, all available options remain on the table. I think it is incumbent upon us, however, to give the negotiated agreement a chance to succeed, and it is for these reasons that I will support the agreement.”