Iranian politician: Parliament no place for children, donkeys or women

One Iranian politician has observed International Women's Day by sharing his opinion that Iran's parliament should remain for men only. 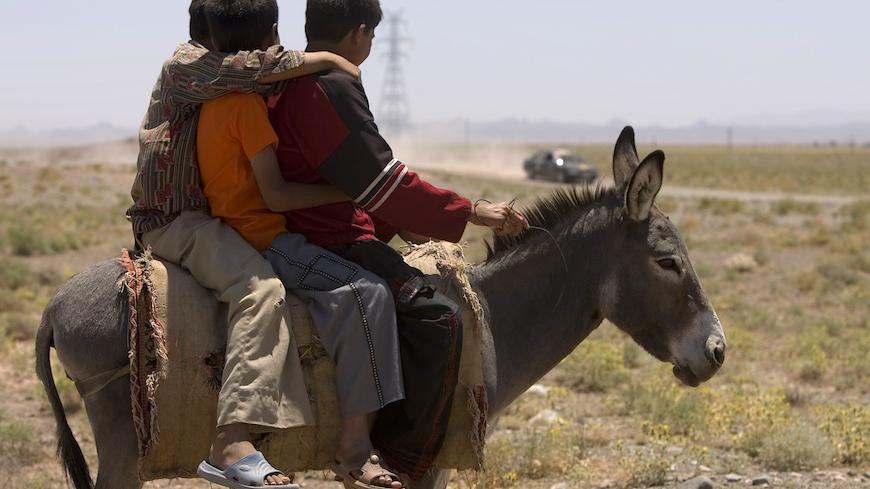 Village children sitting on their donkey watch a car pass during a rally on the outskirts of Mashad, 924 kilometers (574 miles) east of Tehran, July 12, 2007. - REUTERS/Caren Firouz
Arash Karami
@@thekarami
March 8, 2016

The important post of heading the Assembly of Experts is now up for grabs, with the former assembly chair, Ayatollah Mohammad Yazdi, having failed in his bid to be re-elected to the body Feb. 26. The new assembly leader will have an influential role in determining the next supreme leader, should the occasion arise, and in dictating national talking points.

Yazdi did not mince words in his last speech as a member and chairman of the assembly, delivered March 8. He warned that the nature of the Islamic Republic's governing system must be preserved and that one should be wary of the enemy’s smile, the latter a clear message to President Hassan Rouhani.

“In the Islamic Republic system, members of the Assembly of Experts, in addition to determining the supreme leader, have to take care of the guardianship of the jurist ruling system so that it does not change,” Yazdi said. He did not specify what change should be guarded against, but one constant concern has been defining the powers of the supreme leader.

In regard to Rouhani’s attempts to reduce tensions with other countries, including the United States, Yazdi said, “Do not become happy with the enemy’s smile.” He referred to the United States as a “known enemy” that on a number of occasions has broken promises, cautioning Rouhani not to be fooled by their smiles.

Yazdi also said that he is happy he was not re-elected and is relieved to have responsibility lifted from his shoulders. He also denied media rumors that anyone has been pressured to resign in order to open up a space for him.

Members of the Assembly of Experts had elected Yazdi chairman in March 2015, selecting him over Ayatollah Ali Akbar Hashemi Rafsanjani. The position had been left vacant with the passing of Ayatollah Mohammad-Reza Mahdavi-Kani.

Rafsanjani and Rouhani, both of whom were re-elected to the assembly, were all smiles at Yazdi's final session. They had good reason to be happy. Their list swept 15 of the 16 assembly seats from Tehran. Who will emerge with the leadership, however, is far from certain.

Competition to chair the Assembly of Experts is a relatively new phenomenon. When the assembly was created in 1983, Ayatollah Ali Meshkini was selected to be chairman and held the position until 2007, when he died. According to the news website Asr-e Iran, Meshkini was respected among all the political factions and contested the chairmanship unopposed. After Meshkini, Rafsanjani beat out Ayatollah Ahmad Jannati to become chairman, serving in that position until 2011. Many believe that Rafsanjani lost the leadership position because of his soft stance against the 2009 protests.

The lists of candidates for the Assembly of Experts could not be divided into Reformists, moderates or conservatives. Many election lists included overlapping names, with some candidates appearing on multiple lists. Asr-e Iran, however, has broken down the new assembly, identifying two informal factions: one headed by the pragmatist Rafsanjani and the other led by the hard-line Jannati.

If Rafsanjani decides not to run for the chairmanship, it is possible that Ayatollah Mahmoud Shahroudi or Ayatollah Mohammad Imami Kashani might run instead. On the other side, if Jannati, who is also head of the powerful Guardian Council, decides against running, it is possible that Ayatollah Ahmad Khatami or Ayatollah Ahmad Alamolhoda will contest for the position. On March 8, Khatami said that there have thus far been no discussions on who might run for the chairmanship.

In parliamentary news, Nader Ghazipour, representing Urumia, continues to receive criticism for comments he made about women serving in parliament. On March 2, Ghazipour had said that the legislature was not a place for “children, donkeys or women. … It is a place for men.” He later apologized on his Telegram account, saying he did not mean to offend the women of his hometown. Fatemeh Rahbar, leader of the women's faction in parliament, said that a number of female legislators had filed a complaint against Ghazipour with the prosecutor’s office.