White House: Russia ‘on the hook’ for Syria truce

The White House said Russia is ‘on the hook’ for the success of the partial Syria truce set to start Feb. 27, and cautioned that the truce is likely to take time to take hold, and will face setbacks. 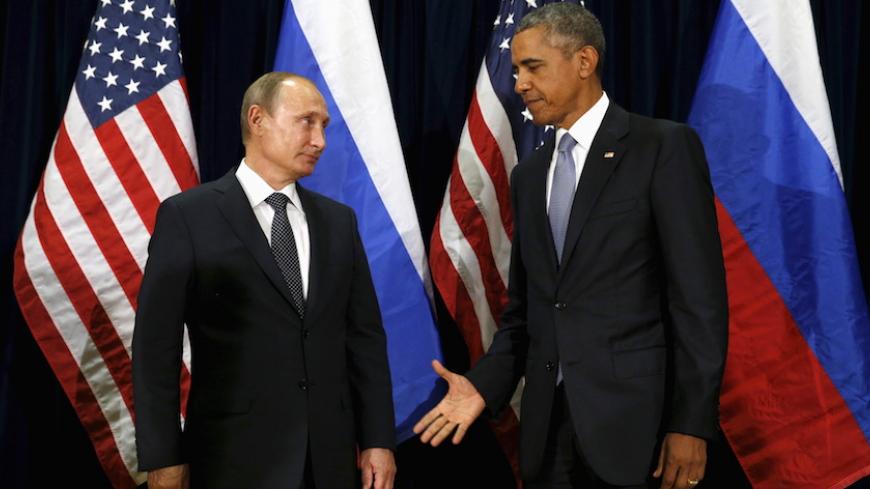 WASHINGTON — US President Barack Obama, in his first extended comments on a partial Syria truce plan agreed upon with Russia that is set to go into effect Feb. 27, cautioned that it was likely to be messy and fragile, but he said the United States had little choice but to try to reduce the violence and save Syrian lives.

“None of us are under any illusions,” Obama said after meeting with his national security Cabinet at the State Department Feb. 25. “But history would judge us harshly if we did not do our part in at least trying to end this terrible conflict with diplomacy.”

In contrast with Russian President Vladimir Putin’s confident assertion in a Feb. 22 special television broadcast that the US-Russia partial truce accord could be a turning point in the Syrian crisis, the White House signaled far more doubt that the terms would not be violated and put most of the burden on Russia for seeing it through. The White House posture suggested it was approaching the Syria truce much as it had the 2013 agreement with Russia to remove Syria’s chemical weapons stockpile, which had been prompted by Obama’s threat to use force. Now, the White House seems to be calculating that Putin may be interested in a way to put Syria on a path toward stabilization after his military intervention last fall that has strengthened the diplomatic leverage of Syrian President Bashar al-Assad.

“Russia, and President Putin personally, have a lot of skin in the game,” White House spokesman Josh Earnest said Feb. 25. “And they’re on the hook for making sure that this understanding is successfully implemented.”

“So we certainly welcome the prominence that President Putin has attached to this, because Russia has got a lot riding on it,” Earnest added.

“If implemented — and that’s a significant ‘if’ — this cessation could reduce the violence … It could save lives,” Obama said. “Potentially, it could also lead to negotiations on a political settlement to end the civil war.”

“There’s no alternative to a managed transition away from Assad,” Obama said. “It’s the only way to end the civil war and unite the Syrian people against terrorists.

“This is an area where there’s still significant dispute between us and the Russians, between us and the Iranians,” Obama added. “And the question is going to be whether the cessation of hostilities gives all the parties concerned an opportunity to reflect and assess what, in fact, will be required in order for us to see an end to the fighting in Syria.”

Obama’s comments came after a week in which the US government, particularly the Pentagon, signaled deep ambivalence about coordinating with Russia on working out the details on how to monitor and police the partial truce, while the Russian Defense Ministry, by contrast, tweeted out that it had delivered Syria maps delineating the armed groups and hotline info to the US defense attache in Moscow and gotten no response.

“Yesterday, American party was presented all contact info on ‘hot line,’ prescribed by the Russian-American agreement on cease-fire in Syria,” the Russian Defense Ministry tweeted Feb. 23. “Twenty-four hours have already passed. No answer concerning the hot line has been received yet from American partners,” the message continued.

“Russian party has started a complex and particular work aimed at reconciliation in Syria,” the ministry said, nudging the Americans to be more responsive.

US officials said they would be watching with some skepticism to see if Russia and the Syrian regime stop attacking more moderate Syrian opposition groups operating in the northwest of Syria nearby the al-Qaeda-linked Jabhat al-Nusra, which — along with the Islamic State — is excluded from the cease-fire. Regarding Russian claims of American foot-dragging on establishing the hotline to monitor the Syria cease-fire, US officials said there would be a need for more extensive communications between capitals of various Syria stakeholders to try to get the cease-fire to take hold in the early days. The United States is "clear-eyed" about Russian actions in Syria, but also believes Russia may not think it is in its interests to get bogged down in Syria and lose the window of opportunity for a diplomatic way out of the crisis.

“We've always said we'll judge Russia by its actions, not its words,” a senior US administration official, speaking not for attribution, told Al-Monitor. “We have been clear-eyed about Russian actions in Syria, just as we have in eastern Ukraine.”

“At the same time, we owe it to the brutalized Syrian people to find ways to ease their suffering,” the senior US administration official added.

“We still have profound differences with Russia on a number of issues in Syria,” the official said. “But as we have said, publicly and privately, it is not in Russia’s interests to get bogged down in a conflict in Syria. None of the military actions they have taken in Syria have helped stabilize Syria after five years of brutal civil war that has killed hundreds of thousands and displaced millions. And none of the billions they have spent propping up Assad has made the Russian people any more secure or helped a struggling Russian economy.”

The Pentagon meanwhile continued to rebuff an apparent Russian effort to use the cease-fire as a way to deepen military coordination with the United States on Syria.

“We … note that the Department of Defense maintains its policy of limited contact with the Russian military forces in Syria,” a State Department official, speaking not for attribution, told Al-Monitor. “This is not a channel for military-to-military cooperation.”

Amid the jostling between Washington and Moscow on the cease-fire preparations, the United States and Russia co-chaired the first meeting of the 20-member International Syria Support Group (ISSG) cease-fire task force in Geneva Feb. 26. Lawrence Silverman, the Deputy Assistant Secretary of State for Near Eastern Affairs, heads the US team at the ISSG cease-fire task force meeting, the State Department official said.

The UN Security Council was also expected to adopt a resolution endorsing the partial Syria cease-fire agreement Feb. 26, a few hours before the partial truce is set to go into effect.

The White House sought to lower any expectations that all the guns would fall silent quickly, and cautioned it would likely take time to take hold.

“In the initial days, the emphasis must be on getting the cessation to take hold and defusing tensions as reports of violations invariably surface,” the US senior administration official said. “Given the intensity of fighting and the number of actors involved, putting this cessation fully into effect is going to take time.”

“Once the cessation of hostilities is on more solid footing and generally holding, the focus will shift to monitoring and reporting on compliance,” the US administration official added. “Especially in the early days, the ISSG and cease-fire task force co-chairs, as well as members with influence on the parties, will need to be in constant touch by email, phone and video-conferencing … to exchange information and engage the parties, to prevent further violations and a resumption of hostilities.”

The office of UN Syria envoy Staffan de Mistura will maintain a small in-country presence in Syria, which will serve as a secretariat of the cease-fire task force and a conduit and hub of information for all, the US official said.

The State Department suggested that the United States and Russia had reached an understanding that when the partial cease-fire goes into effect, armed groups who have signed up to the partial truce will have some time to move away from groups like Jabhat al-Nusra, which are excluded from it, without being attacked by Russia.

“We expect when the cessation of hostilities is implemented, that the parties on the ground are going to have an opportunity to distance themselves from [Jabhat] al-Nusra,” the State Department official told Al-Monitor.

“This is a moment of truth for Russia,” the State Department official said. “It’s a time for deeds, not words.”