Why did the US really bomb Libya?

Does the strike on a neighboring terrorist haven signal a new commitment to the Arab Spring’s golden child Tunisia? 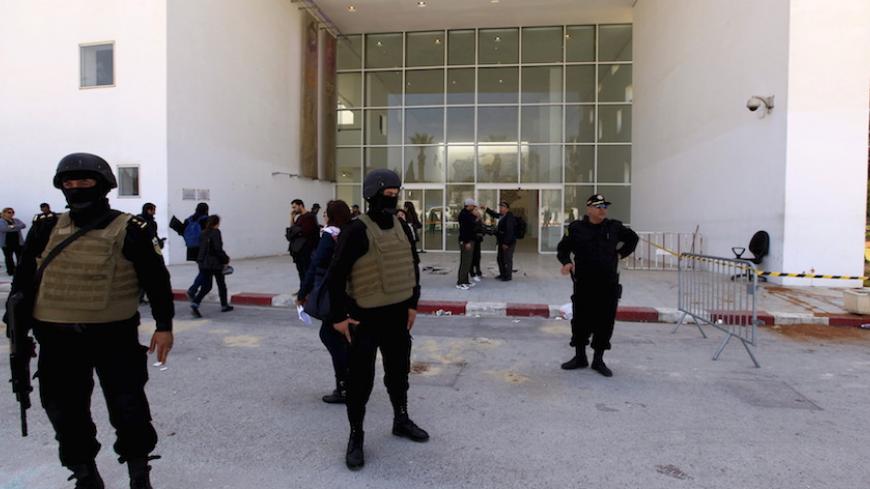 Tunisian police officers guard the entrance of the National Bardo Museum in Tunis, March 19, 2015. Tunisia deployed the army to major cities and arrested four people after militant gunmen killed at least 20 foreign tourists visiting the museum, the worst attack on the North African country in more than a decade. - REUTERS/Anis Mili

The Feb. 19 airstrike on an apparent Islamic State (IS) training camp near Sabratha isn’t the precursor to a sustained American air campaign in Libya, US officials have made clear.

Instead, the pre-dawn bombing that killed some 40 suspected terrorists near the border with Tunisia appears to be better understood as a one-off operation aimed at protecting that fledgling democracy from militants who would plunge it into chaos. Pentagon spokesman Peter Cook said the strike aimed to take out Tunisian national Noureddine Chouchane, a prime suspect in the 2015 attacks that killed 60 people in Tunis and Sousse, along with a camp where foreign fighters were training for possible “external attacks on US interests in the region.”

“I think this [attack] should be treated separately than the Libya issue,” said Christopher Chivvis, the associate director of the International Security and Defense Policy Center at the Rand Corporation. “I think this has much more to do with Tunisia than it does with Libya.”

The “isolated compound” that was destroyed by F-15 jets and unmanned aircraft, he said, is “nothing like going after the thousands of [IS] fighters” present in their Libyan stronghold of Sirte, hundreds of miles to the east.

“Obviously the United States is concerned about the stability of Tunisia and the impact that the terrorist attacks that took place last year can have on the Tunisia political system, which still remains the one shining light from the 2011 Arab uprisings,” Chivvis told Al-Monitor. “There are certainly a lot of countries that are interested in doing what we can to strengthen security in Tunisia, and this was an obvious attempt to step in that direction.”

One such country is Great Britain, which lost 30 of its citizens in the Sousse beach hotel attack in June 2015. British Defense Secretary Michael Fallon said he authorized US jets to use a British base to launch the attack.

"I welcome this strike that has taken out a Daesh training camp being used to train terrorists to carry out attacks,” Fallon told reporters. “I was satisfied that its destruction makes us all safer, and I personally authorized the US use of our bases.”

The Tunisian Embassy in Washington did not have an immediate reaction, but Tunis in the past has expressed concern about Sabratha’s emergence as a base for the Islamist group Ansar al-Sharia, according to The New York Times. Tellingly, reports from the ground said the US strikes killed dozens of Tunisians and Algerians, but apparently no Libyans, suggesting that the destroyed camp may have been used to train recruits to fight elsewhere in North Africa as well as in Europe.

With thousands of young, disaffected Tunisians flocking to IS and similar groups, the United States and Tunisia have been rapidly expanding their counterterrorism cooperation. The Obama administration designated Tunisia as a major non-NATO ally eligible for enhanced military assistance during President Caid Essebsi’s visit last year, and US equipment will help monitor a newly completed “obstacle system” along the border with Libya.

Hawkish lawmakers in Congress have been pushing the administration to open another front against IS in Libya, which National Intelligence Director James Clapper described as the terror group’s fastest-growing affiliate in testimony to Congress earlier this month.

“We hope today’s airstrikes signal the beginning of a new commitment by the Obama administration to put Libya at the center of a comprehensive strategy to defeat international jihadism,” House Intelligence panel Chairman Devin Nunes, R-Calif., said in a statement.

That’s unlikely to happen, however.

Obama has turned down recommendations from several defense officials to target Sirte, the Daily Beast reported this week, preferring to first focus on settling the political crisis in Libya that has fueled the rise of the IS affiliate and other militant groups. And US officials did not contradict the impression that the Feb. 19 attack was anything more than a strike of opportunity against a dangerous terrorist leader. “The parent tumor of [IS] is in Iraq and Syria, and that remains the primary focus for us," Cook told reporters at the Pentagon when pressed about whether the Sabratha strike represented a new chapter in the US campaign against IS in Libya. "As we see [IS] metastasize and spread to other parts of the world, we're going to continue to keep a very close eye on it, and when we feel the need to strike, we'll be prepared to do so using all of the tools at our disposal and obviously also working with our coalition partners."