The international community hopes the new Libya government can bring together militias in an coordinated effort against Islamic State fighters. 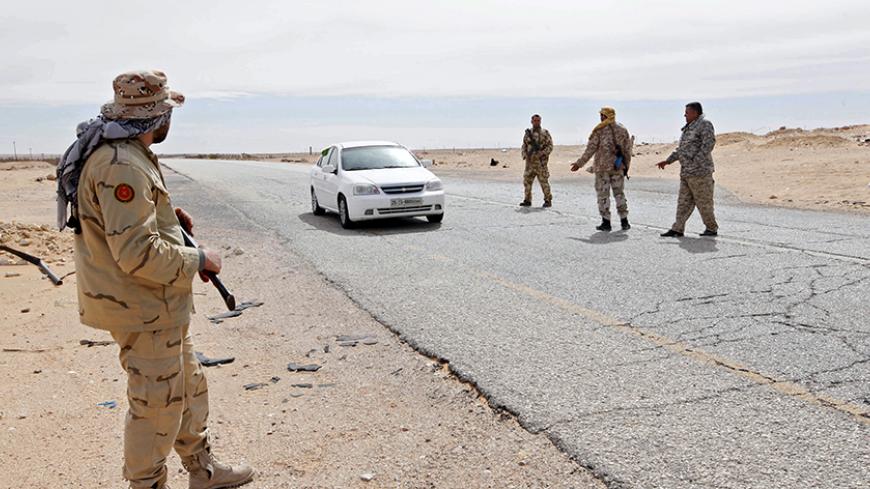 Libyan soldiers stop a car at a checkpoint in Wadi Bey, west of the city of Sirte, which is held by Islamic State militants, Feb. 23, 2016. - REUTERS/Ismail Zitouny

After several failed attempts, the UN-backed Libyan Government of National Accord (GNA) finally moved to Tripoli, arriving March 31. The international community praised the action, hoping it will be the first step toward not only unifying the country’s two rival governments but also coordinating a response to the Islamic State (IS).

The international community is expecting the GNA to take a leadership role in the fight against the militant terrorist group by uniting Libyan militias around an anti-IS strategy, as there are mounting concerns that IS will not only gain a foothold in the North African state but also seize the country’s oil reserves. “In addition to increased scrutiny of IS and occasional airstrikes, there is an interest in providing air support, training, etc., for an anti-IS effort,” said Issandr El Amrani, North Africa project director for the International Crisis Group.

Gen. David M. Rodriguez, head of the US Africa Command, said in an April 7 briefing that the group’s stronghold in Libya is currently limited to the city of Sirte, but that it does have a presence in Derna and Benghazi, in the east, and Sabratha, in the west. In the March issue of the CTC Sentinel, Geoff D. Porter reported the total area the group can maneuver in is roughly 4,550 square miles.

Life for the 700,000 residents of Sirte is subject to strict regulations similar to those in IS-controlled territories in Iraq and Syria, including bans on smoking and music. Unlike in Iraq and Syria, however, the IS faction in exclusively Sunni Muslim Libya did not evolve from local grievances. Instead, its positioning has been portrayed as a fallback option to Syria and Iraq. An estimated 70% of IS fighters in Libya are believed to be non-Libyan, including from Tunisia, Egypt and Chad.

The intimidating tactics used in Iraq and Syria are now being used in Sirte, Moammar Gadhafi’s hometown and the city where the Libyan leader was killed. Reports from sources in the city who asked to remain anonymous for security concerns suggest that the morality police are increasingly arresting youths for selling cigarettes, and there are frequent raids on the homes of military and police personnel, who are under pressure to enroll in the organization. If they refuse, they are executed, according to the reports. In addition, IS recently demanded that each citizen pay zakat (a religious obligation) of 400 Libyan dinars (almost $300), which goes to directly support the group. A recent estimate from a source in Sirte put the number of IS fighters in the city and its environs at about 3,000.

The total number of IS fighters in Libya remains disputed. At the end of last year, estimates stood between 2,000 and 3,000 but have since increased. According to Rodriquez, recent figures from the US intelligence community suggest that there are between 4,000 and 6,000. Porter estimates that Libya has about 30% of the average estimate of fighters in Iraq and Syria, which combined geographically are three times smaller than Libya.

“The question is how [do you define IS],” said El Amrani, discussing the recent increase. Many current Libyan IS members were previously members of other militia groups and the al-Qaeda affiliate Ansar al-Sharia. According to El Amrani, the numbers need to be viewed with caution. He added that there is also a question of the degree of unified command by leaders with links to IS in Iraq and Syria over IS fighters within Libya’s borders.

The suspected increase in IS fighters has stirred questions about the group’s intentions and whether it is seeking to establish a stronghold in the oil-rich North African country. The Sunni extremist group was initially able to take advantage of the power vacuum in the aftermath of Gadhafi's overthrow. US President Barack Obama has recently described the failure to prepare for the aftermath of Gadhafi's fall as the worst mistake of his presidency. Indeed, the absence of a central and unified government paved the way for the growth of militias and groups such as IS.

Concern about IS' intentions prompted the United States to conduct two airstrikes in Libya, both targeting what Rodriguez described as posing an “imminent” threat to US interests and personnel. On Feb. 19, fighter jets and drones attacked an IS training camp close to Sabratha, 40 miles west of Tripoli. Among the 41 killed was the main target, Noureddine Chouchane, a Tunisian national believed to have been involved in two terrorist attacks in Tunisia last year. Two Serbian Embassy staff members held hostage were also killed. In November, a US airstrike in the eastern city of Derna killed Abu Nabil, the group’s former leader in Libya. According to El Amrani, these types of attacks can be efficient in containing the militant group’s expansion, eliminating its leadership and materiel and maintaining pressure on the ground.

There are risks, however, to increasing the international presence in Libya too quickly. Despite the GNA’s initial success, the country remains divided, with people in both the east and the west opposing the unity government.

“These opponents would likely use any foreign intervention as a rallying cry, especially the Islamist side, as we see from the recent calls by [Libyan Grand] Mufti al-Gheriani for jihad against the GNA,” said El Amrani. Meanwhile, in March, UN experts reported that IS “has been spreading a nationalistic narrative, portraying itself as the most important bulwark against foreign intervention.”

“Ultimately Libyans will need to retake territory under the control of IS,” El Amrani said. That will require not only a unified effort by Libyan groups, but a plan for governance that takes into account local grievances. There is already a widespread perception that the GNA is a Western product. “Moving too fast could compound that view,” El Amrani said. “More efforts need to be made, in particular, at getting to an agreement among security actors to back this government and a single anti-IS strategy.”

Moving forward, the political and economic drivers of violence in Libya need to be addressed. “Security is rarely a result of mere force,” said Mattia Toaldo, senior policy fellow at the European Council on Foreign Relations. “The fight over oil resources has been a big driver of violence.”

Toaldo argues that a more consensual management of these resources should help de-escalate fighting between militias and increase focus on IS. According to Toaldo, the government's priorities should now include ensuring it can pay salaries, reconciliation with Zintan, thereby pacifying western Libya and restarting oil production, as well as reconciliation with the east and building a national security council.