Lobbying 2016: Tunisia looks to US to entrench democracy 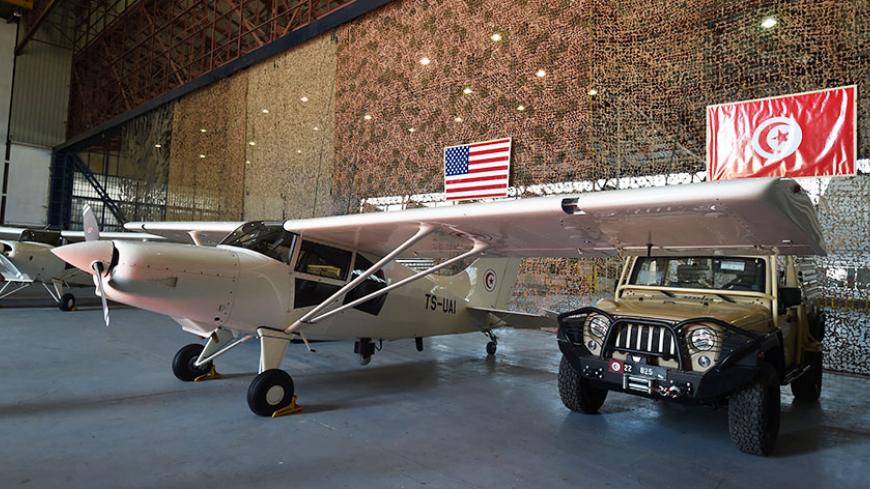 Reconnaissance aircraft and military vehicles offered to Tunisia by the United States are seen at a military base in Tunis on May 12, 2016. The United States delivered military hardware to Tunisia to help the North African country hit by several Islamic State group attacks secure its borders and battle terrorism. - FETHI BELAID/AFP/Getty Images

Five years on, the Arab Spring has long since given way to a bitter season of chaos, radicalism and repression.

Only tiny Tunisia continues to buck the trend. And it’s counting on Congress and the Obama administration’s help to live up to its billing as a role model for the rest of the Middle East.

“After decades of dictatorship and several years of transition, Tunisians have won their freedom and democracy,” Presidents Barack Obama and Beji Caid Essebsi declared in a joint op-ed during the Tunisian leader’s visit to Washington last May. “As Tunisians seek to build the Arab world’s newest democracy, they will continue to have a strong friend and partner in the world’s oldest democracy, the United States of America.”

The bilateral relationship has certainly been on an upward swing. The pending aid request from the State Department stands at $140 million, on par with last year’s and up almost tenfold since 2009.

Arms sales are also flying high, with the United States expected to deliver the first eight of 12 Blackhawk helicopters (a $700 million deal) by the end of the year. Tunis is also set to receive 24 OH-58D Kiowa light attack choppers for free under the Pentagon’s Excess Defense Articles — supplemented by a $100 million sale of weapons and equipment.

The economic and military aid aims to help the cash-strapped country of 11 million people face an array of challenges.

The first is neighboring Libya. The country’s descent into civil war has destabilized the entire region, with the Islamic State (IS) and other militant groups using it as a base to radicalize young Tunisians and plan cross-border attacks.

“It's chaos in Libya. People are crossing borders without any control,” visiting 2015 Nobel Peace Prize co-winner Ouided Bouchamaoui told Al-Monitor during a whirlwind tour through Washington in March. “And Tunisia is suffering because of this.”

Bouchamaoui said peace in Libya would solve “80%“ of Tunisia’s problems. Until Libyan factions and the international community hammer out a resolution, she pointed out, vital investments in long-neglected regions simmering with discontent will have to be diverted to border security.

Tunisia’s ambassador to Washington, Faycal Gouia, applauds the increased counterterrorism cooperation with the United States. That includes last year’s recognition as a major non-NATO ally and the recent delivery of jeeps and small aircraft to patrol the Libyan border, as well as the February airstrike that killed Tunisian terrorist leader Noureddine Chouchane and dozens of his acolytes inside Libya.

Gouia said he’s grateful for the proposed $20 million hike in economic aid over the State Department’s fiscal year 2016 request. But he notes that it has come at the price of an equivalent reduction in security assistance.

“Now we’re going to fight, so to speak, to try to shore up military aid because it’s very important,” Gouia told Al-Monitor in a February interview at the embassy. “Terrorism and challenges of all sorts that threaten Tunisia’s stability and security must be taken into account as we reinforce cooperation between our two countries.”

Congress appears to have heard him loud and clear. The FY 2017 foreign aid bills pending in the House and Senate both exceed the State Department request by $20 million and $5 million, respectively.

The ambassador is also lobbying in favor of a free trade agreement with the United States, an idea that’s been bouncing around for years. Reps. Erik Paulsen, R-Minn., and David Schweikert, R-Ariz., have both introduced resolutions of support but haven’t gotten any traction in an election year marked by voter hostility toward trade. Schweikert is also the co-chairman of the Congressional Tunisia Caucus, along with Rep. Alcee Hastings, D-Fla.

Tunisia views such a deal as a crucial tool to broadcast that the country is open for business despite lingering regional insecurity and the slow pace of economic reforms. Job creation is a top priority to prevent disaffected youths from joining terrorist groups, especially after a spate of attacks last year decimated the country’s vital tourism sector.

Recent US support includes last year’s launch of a Joint Economic Commission and up to $50 million worth of partnerships between the US government’s development finance institution, OPIC (Overseas Private Investment Corporation), and three Tunisian banks — Amen Bank, Arab Tunisia Bank and Attijari Bank — to expand their Small and Medium Enterprise portfolios. The State Department is also funding a Tunisian-American Enterprise Fund, seeded with $60 million in US Agency for International Development funds — plus another $20 million in the pending budget request — to promote the expansion of the private sector.

While it hasn’t hired any outside lobbyists, the embassy has benefited from an unsolicited and uncoordinated assist from Tunisia’s Ennahda party. The former Islamist party — it dropped the label at its May congress — hired global public relations firm Burson-Marsteller in 2014 to reassure skittish policymakers of its democratic credentials but has largely focused on promoting Tunisia as a whole.

“Tunisia is an inspiration for the Arab world, and as Tunisia’s Islamic democrats, Ennahdha sees Islam and democracy as sharing the same values,” external relations chief Rafik Abdessalem told Al-Monitor in an August 2015 interview. “Our efforts to communicate with the West are rooted in the need to generate support from the international community to ensure that Tunisia’s democracy remains strong.”

The country is also the darling of Washington’s pro-democracy community. In October, 114 Middle East experts and former lawmakers and government officials wrote to top appropriators to urge them to fully fund the Obama administration’s request, which briefly was at risk of being shortchanged by the Senate.

“The importance of Tunisia’s success cannot be overstated. For the United States, having a strategic ally in the Arab world that shares not only our strategic interests but also our democratic values is an extraordinarily important opportunity that should not be missed,” they wrote. “The international community and citizens of the region often fear a choice between violent extremism and repressive autocracy; a stable and prosperous democracy in Tunisia would provide the most powerful counterexample to this false dichotomy.”

Their efforts — and Ambassador Gouia’s relentless lobbying — appear to have paid off. House appropriators in late June introduced draft legislation that would top Obama’s aid request by $20 million.