Can Turkey return as a player in Syria?

The siege of Aleppo and resulting refugee flow offer an opportunity for Turkey's return as a player in Syria, but realities on the ground won't make it easy. 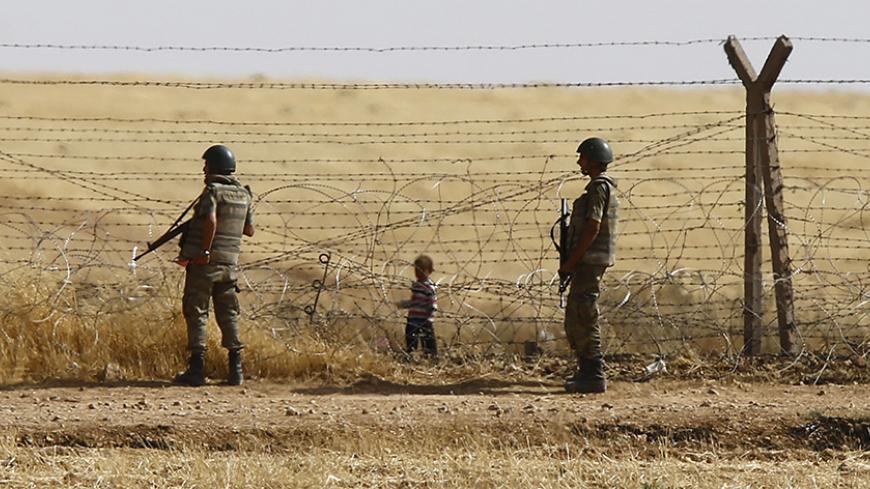 Turkish soldiers stand guard as a Syrian refugee boy waits behind the border fences to cross into Turkey on the Turkish-Syrian border, near the southeastern town of Akcakale in Sanliurfa province, Turkey, June 5, 2015. - REUTERS/Osman Orsal

Syria has become the best-marketed commodity in Turkey, where all foreign policy issues are packaged for domestic consumption. Ankara appears, however, to have lost all perception of reality regarding anything to do with Syria, falling victim to Alice in Wonderland syndrome. The government has embarked on a surreal journey in trying to persuade the public that Turkey is winning, not losing, in Syria.

The first week in February, a coalition of the Syrian army, paramilitary forces from Iran, Hezbollah and Russian special forces, all supported by the Russian air force, advanced from east of Aleppo to its north. Hearts skipped a beat in Ankara as Bashar al-Assad’s army laid siege to Aleppo, which had mostly been in rebel hands since 2012, and cut supply routes linking the opposition forces to Turkey. The risk of Kurdish forces moving west of the Euphrates River and reaching Afrin further heightened jitters in Ankara.

Last year, nothing went as Turkey would have liked in Syria. After its downing of a Russian warplane Nov. 24, Ankara lost all standing as an independent and effective playmaker on the ground and in the air in Syria. The siege of Aleppo, however, has set in motion another refugee flow, providing Ankara an opportunity to strengthen its hand in Syria by intervening on the ground.

“This is the best time to enter Syria” has become the mantra of pro-government media in Turkey. Their articles justify the call for military intervention by insisting that Turkey cannot allow a Kurdish buffer state on its border controlled by the United States and Russia. They further argue that Turkey must eliminate the threat posed by the Syrian Kurdish Democratic Union Party (PYD), that it cannot afford to remain out of the game in Syria and that a refugee enclave must be created inside Syria (without allowing refugees to cross into Turkey).

Some pro-intervention commentators cite these justifications to encourage Ankara to quickly intervene militarily in the Jarablus pocket, north of Azaz-Munbij line. Well-placed military sources in Ankara who requested anonymity told Al-Monitor that many key people in Ankara view the developments in Aleppo as the last chance for Turkey to make a comeback as an effective actor in Syria. They fear that if Ankara fails to use events in Aleppo to advance national interests, Turkey will be permanently sidelined in the Syrian game.

Ankara has to address five key issues before intervening. The first involves the simple, technical matter of air support for the operation. Without air support, it is impossible to launch a ground operation that could last months. Close air support is essential to protect ground forces with firepower, reconnaissance and surveillance, as well as evacuation and troop movements via helicopter. Improvised explosive devices and the risk of suicide bombers make roads unusable for frequent movements.

The issue then becomes whether Russia, which has declared a de facto no-fly zone over northern Syria, will allow Turkish planes and helicopters to enter Syrian airspace. The violation of Turkish airspace north of the Azaz-Munbij line Jan. 29 by a Russian Su-34 interceptor was an important signal of Russia’s determination in this region. If Russia won’t allow Turkish planes to enter Syrian airspace, might the United States be asked to provide air support for the Turkish ground operation? That would require Ankara to first persuade Washington and then the US administration to persuade the Russians.

Some ill-informed, and actually woeful, comments have been made suggesting that Turkey can provide the necessary fire support with its 25-mile-range artillery and multiple rocket launchers, eliminating the need for the air force. This option doesn’t sound realistic when one considers the possible duration and scope of the operation.

The second dimension concerns Turkey’s foreign policy choices. Although Ankara might get the support of Saudi Arabia, Qatar and Bahrain for a ground operation, confronting the United States and Russia in Syria would make life difficult. It is unlikely that Turkey could launch an operation without the support of at least one of the two in the field.

The third issue involves a truly bitter pill that Ankara might soon have to swallow. To avoid confronting two enemies in a ground operation requires the field support of either the PYD or the Assad regime. The reality is that Ankara cannot declare the Islamic State, Assad’s army and the PYD enemies at the same time.

The fourth issue is the continuing clashes with the Kurdistan Workers Party (PKK) in Turkey’s southeast, the country's soft underbelly. It appears that Ankara-PYD relations are increasingly charting the course for that conflict. Hundreds of thousands of Kurds in Turkey are likely monitoring Ankara’s actions toward the PYD. It may well be reasonable to view northern Syria as the primary front of the Ankara-PKK clashes and the battles in the southeast as the secondary front. In such a situation, a Turkish operation in Syria could expand clashes in Turkey, including to the west.

The fifth issue to address is the nature of any military operation. The US experiences in Afghanistan and Iraq have demonstrated that no matter the cause of an intervention or its legitimacy, the paramount question that must be answered first is: How do we exit? The risks are high sending soldiers into an operational terrain like Syria's, where conditions change by the minute. Neglecting an exit strategy usually comes with heavy economic and political costs. Entry is not a major problem for the Turkish army, provided the political decision-makers in Ankara put some thought into how to stay there after entering and how to get out.