Turkey has made some major mistakes with its one-dimensional foreign policy, say former ambassadors who served under the Justice and Development Party. 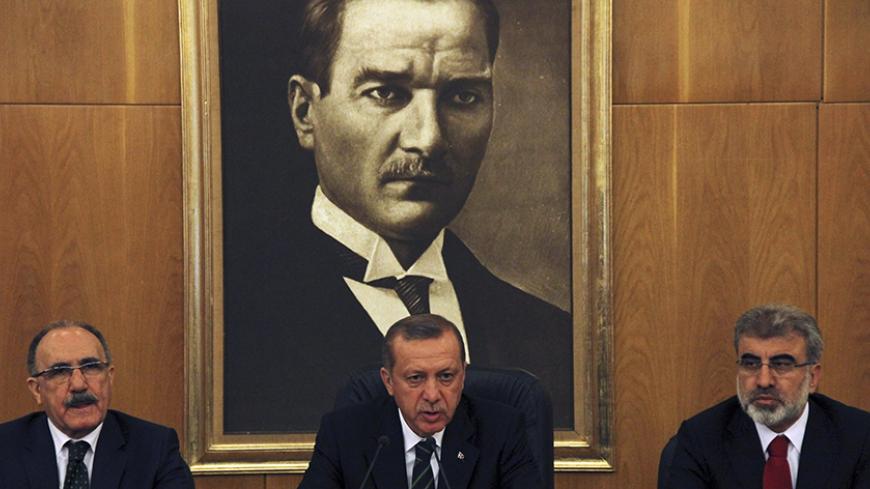 Turkish experts — aside from the most hardened, pro-government experts — agree that Ankara’s foreign policy under the ruling Justice and Development Party (AKP) is in shambles. They generally agree this was caused by the country abandoning its traditional foreign policy in favor of an Islamist outlook.

This situation, experts argue, has reduced Ankara’s options significantly, especially at this turbulent time in the region. Al-Monitor asked three retired ambassadors, who served under the AKP and are known as seasoned foreign policy commentators, to explain why Ankara finds itself isolated and unable to influence regional events that are having seriously negative effects on Turkey’s interests.

The foreign policy framework drawn up by Mustafa Kemal Ataturk, the founder of modern Turkey, is summarized by the adage he coined, “Peace at home, peace in the world.” It was based on a realistic assessment of Turkey’s geopolitical location, as well as bitter past experiences, said retired Ambassador Uluc Ozulker. A basic tenet of this policy was to remain Westward-looking — a tenet Ozulker said has changed under the AKP.

"The AKP’s ideological world view is based on what is known as the ‘national vision,’ which is Islamist-based and veers toward the outlook of the Muslim Brotherhood," he said. That outlook is related to the anger felt toward Israel and Egyptian President Abdel Fattah al-Sisi, Ozulker added.

“The AKP also tried to implement policies that were beyond Turkey’s means and capabilities. Turkey’s foreign policy in the past was cautious and defensive. When the Turkish economy started growing, the AKP used this, combining it with its ‘national vision’ outlook, to pursue more active policies,” Ozulker said. “It aimed for good relations with neighbors but tried to achieve this from the perspective of a patronizing big brother, which gradually alienated its neighbors and other regional powers.”

Ozulker added that another mistake the AKP made was to pursue an idealistic foreign policy, especially under the tutelage of Prime Minister Ahmet Davutoglu, who served as foreign minister from 2009 to 2014.

“The assumption was that Turkey was the principal player who could rearrange things and change the established order in the region according to its will. But realpolitik and Turkey’s geopolitical place was never conducive to achieving this,” he said.

The AKP has a vindictive approach to foreign policy and ostracizes those who refuse to listen to it, eventually looking on them as its foes, according to Ozulker. “We see this in Turkey’s ties with Israel, Egypt and Syria. The AKP forgot that in foreign policy there are no eternal friendships or eternal enemies, only eternal interests,” he said.

“Everyone knows which bloc they more or less belong to today. This is also the basis for collective security. The AKP allowed Turkey to drift away from the West but failed to find a new port for itself. It asked to be admitted to the Shanghai Cooperation Organization but failed. Today it is isolated and does not know where it belongs. There are signs that it is trying to return to the Western fold, but even that is tentative,” Ozulker said.

Retired Ambassador Temel Iskit also said the AKP’s principal mistake was to move Turkey away from its traditional foreign policy.

“The vision it tried to replace this with was ideologically based and leaned heavily on a Sunni worldview. It assumed that Turkey could be the regional Sunni leader, which was not only out of tune with Turkey’s traditional policies, but also not realistic,” Iskit said.

“The Syrian crisis provided a concrete example of how misguided all of this was. Of course everyone made a mistake in Syria. The assumption in the heady days of the Arab Spring was that the [regime of Syrian President Bashar al-Assad] would be replaced quickly by a democratic one,” Iskit said. "Ankara’s real mistake, however, was that it insisted on maintaining its original mistake even after everyone else woke up to the reality of what was going on in that country."

Iskit said President Recep Tayyip Erdogan, more than Davutoglu, is the main reason Turkey finds itself in its current position.

“Erdogan tried to impose his personal outlook on others, and when they refused to accept this, as in the case of Assad, he became their enemy and pursued what amounts to a kind of blood feud against them. This is also why Turkey is at odds with the West, with Russia and with just about everyone else today,” Iskit said.

“He has been overtaken by hubris and personal obsessions."

“Foreign policy requires that you stay clear from emotional and doctrinaire positions. If you surrender to these, then it is only a matter of time before the negative results appear," he said.

Pointing out that Turkey’s geopolitical position requires it to pursue a multifaceted foreign policy, Bilhan said Turkey has become trapped by its one-dimensional policies. “Turkey leaned exclusively toward the West in the past, and that, too, was a mistake. But today it is only looking to the Middle East,” Bilhan said.

Another foreign policy mistake was believing that the person in charge shouldn't show his hand while situations are developing, Bilhan said. "This limits Turkey’s maneuverability and ability to backtrack from mistakes,” he added, clearly referring to Erdogan. Bilhan also said Turkey’s decision-makers did not take expert advice seriously and, thus, added to their mistakes.

“Strategic mistakes cannot be corrected by tactical moves,” Bilhan said, indicating there is nothing diplomacy cannot solve, provided failed policies are reversed. “Decision-makers always have the final say, but their decisions should also factor in the views of experts."