As new talks commence on solving the Syria crisis, the international community speculates on what Russia's first move will be. 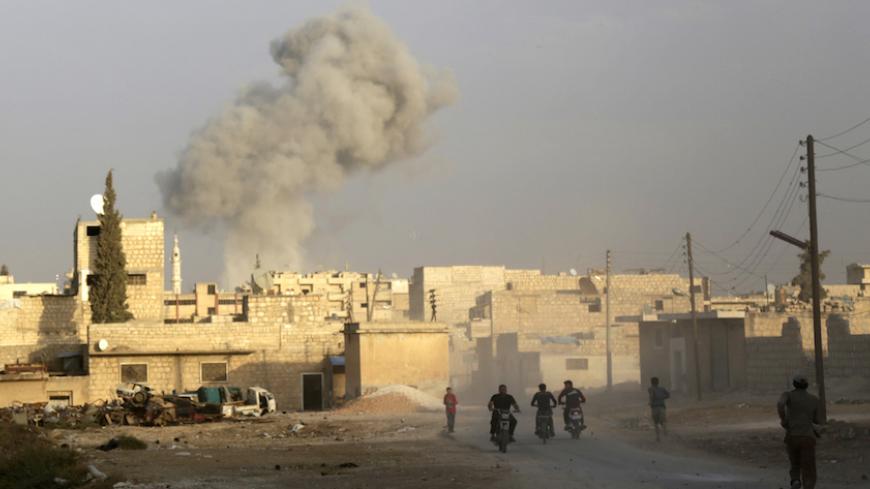 Men ride motorcycles as smoke rises because of, according to activists, an airstrike carried out by the Russian air force in the rebel-controlled area of Maaret al-Numan town in Idlib province, Syria, Oct. 24, 2015. - REUTERS/Khalil Ashawi

Recent developments in and around Syria have prompted Russian analysts to focus on three possible scenarios for the war-torn country: gradual national reconciliation through the Geneva dialogue, a military victory by President Bashar al-Assad or a major war involving global powers.

Russia, like most global and regional powers, continues to support a political solution to the Syrian crisis based on the June 2012 Geneva communique and agreements reached in 2015 by the International Syria Support Group (ISSG) in Vienna.

However, the Kremlin does not believe that a successful campaign against the Islamic State (IS) — or any other terrorist group in Syria — or a cease-fire are possible without closing the Syrian-Turkish border. A river of foreign jihadis, arms and merchandise is flowing into Syria, with contraband oil traveling in the opposite direction.

As Russian Foreign Minister Sergey Lavrov said the other day, “Stopping the flow of contraband across the Turkish-Syrian border that the extremists are feeding off is key to making the cease-fire work.” It is clear that this will be the most striking issue at the ISSG meeting Feb. 11 in Munich.

Russia believes none of the parties to the conflict is capable of a military victory. However, recent military successes scored by the Syrian army in the south with Hezbollah’s support and especially in the north have been interpreted by the media as a tipping point in the war. Indeed, the army’s encirclement of Aleppo and cutting off the militants’ northern supply route from Turkey have radically shifted the balance of force in Assad’s favor. Also emblematic was the liberation of the Shiite enclaves of Nubl and al-Zahra that had been besieged by the rebels for three years.

Incidentally, these events have disproved allegations that Russia’s strikes are targeting moderate opposition forces rather than terrorists. In fact, the main force that has been targeted north of Aleppo is the terrorist group Jabhat al-Nusra. However, according to the Washington Institute for Near East Policy, Jabhat al-Nusra and Ahrar al-Sham have recently begun fighting each other, while Nur ad-Din az-Zinki has left the Aleppo area and the Turkmens are fighting IS units near Aleppo, rather than Assad’s forces. Russia sees no reason why it should not target the positions of Jabhat al-Nusra, which is part of al-Qaeda and is using as a front an alliance with those whose ideological views can be considered moderate.

Jabhat al-Nusra, just like IS, is among the main targets of the Russian air force. At the same time, Moscow confirms that it stands ready to reach an agreement with moderate opposition groups, but still has differences with the Western and regional ISSG partners over who can or cannot be categorized as terrorists.

The Assad government forces could be expected to launch a new offensive shortly on the western supply route to the rebels. Clearly, in addition to purely military objectives, including the establishment of a bridgehead for a massive offensive on IS strongholds in the east, Damascus is maneuvering for a good starting position at the Geneva talks.

The balance of forces in the north of the country has also changed in favor of the Democratic Forces of Syria, an alliance of Kurdish and Arab militia in which the Kurdish People's Protection Units plays the leading role. It may be argued, especially after they captured the northern villages of al-Ziyara and al-Harba, that the Kurds are close to achieving their main strategic goal of establishing an extended control line along the Syrian-Turkish border — which, in Moscow’s opinion, is helping to bring closer the positions of the government forces and the Syrian Kurds.

However, to rule out any relapse of animosity between them, Moscow will need to convince Damascus to accept Kurdish self-determination. Indeed, devising a concept of decentralization for a future Syria that would be acceptable to all is the most important task in any plan for a Syrian resolution.

Military analysts expect that the Kurds may soon launch an offensive in the 60-mile section of the Jarabulus corridor between Turkey and IS, which is like waiving a red flag in front of Ankara. But will Turkey risk an open intervention in Syria in that case? What response would come from Washington, which supports the Kurds militarily (as does Russia)? That consideration might be what recently prompted Moscow to considerably strengthen its air contingent in Latakia by deploying multipurpose Sukhoi-35S fighter planes and upgrading Syrian MiG29s and MiG29CMTs.

Turkey finds it unacceptable to have Kurds lined up along its border with Syria and has repeatedly threatened to intervene militarily if a Kurdish-controlled corridor is established. While rebutting Russia’s accusations that it is preparing a ground intervention, Turkey is at the same time stepping up its anti-Russian rhetoric.

Moscow was baffled by reports over the past few days that Saudi Arabia, followed by Bahrain, are ready to send their ground troops to Syria to “take part in the fight against [IS].” It is anybody’s guess where, how and by what right they might intervene.

This could escalate into a full-blown regional war with the involvement of global powers, given Iran’s position and Syrian Foreign Minister Walid Moallem’ statement that “any ground intervention on Syrian territory without government authorization would amount to an aggression.” According to the nonprofit Conflicts Forum, Russia has agreed with the Syrian government’s new rules of engagement “that will allow these Syrian air force aircraft to attack any threat to Syrian sovereignty — without reference to higher authority.”

It is not by accident, therefore, that shortly before the ISSG meeting in Munich, the king of Bahrain — who maintains friendly relations with Moscow — was invited to meet with Russian President Vladimir Putin in Sochi. Among all Gulf Cooperation Council member states, Bahrain is known to be the first one to join Riyadh’s initiatives.

Moscow was equally puzzled by some US politicians’ calls for establishing a security zone and a no-fly zone in Syria, using a Turkish recipe that Washington rejected only recently.

None of the above suggests that Moscow is banking on Damascus’ military victory. It wants to see inter-Syrian negotiations resumed, but not on the terms proposed by the Riyadh group of opposition members who put forth preconditions.

Former US Secretary of State Henry Kissinger, in his opening remarks Feb. 4 at the Yevgeny Primakov Foreign Policy Cooperation Center in Moscow, spoke about the threat posed by “ungoverned spaces” in the Middle East to the United States and Russia alike. Could this rapidly growing threat force the two countries to put aside their differences and jointly counter potential disintegration of the regional system of nation states, rampant terrorism and violence?