A firsthand account of an airstrike on an Aleppo school. 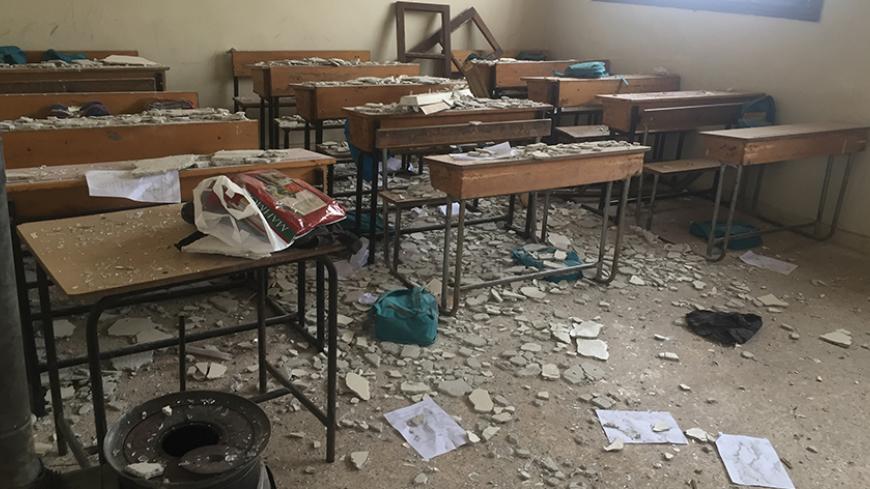 A school destroyed by Russian airstrikes is seen in Aleppo, Syria. - Mohammed Al-Khatieb

Like a madman, I jumped out of bed, awakened by the horrendous sound of a violent blast that shook the room. The doors opened wide and the glass windows shattered. I rushed out of the bedroom, but it was only after hearing the roar of the warplanes that I realized what had happened. This was how my day started at 8 a.m. Jan. 11, in the town of Hawar in the western countryside of Aleppo.

My friend Mansour Hussein hurried down the stairs from his room on the top floor. He was barefoot and terrified. As usual, he was holding his camera and chasing the smoke caused by the bombing. I followed him to the targeted location, which was only a few meters away. A rocket had hit a deserted house and turned it into rubble.

One of the neighbors came out of his house, holding his child and covered in dust. “Praise to God, no one was hurt," he said.

Warplanes were still soaring over our heads. Amid several more explosions, a car carrying volunteers from the Civil Defense reached the place. They spread out looking for victims and any unexploded bombs.

The driver, a tall slender man in his 20s, told us that Russian warplanes had carried out several raids on the western countryside of Aleppo. He named the five towns that were targeted: Khan al-Assal, Orem, Hawar, Kafer Naha and Sheikh Ali. He told us, “There has been a massacre. A bomb hit a school in the nearby town of Anjarah.”

The man spoke with the other members of the civil defense team over wireless devices and, in a blink of an eye, they got in their cars and headed to the bombing’s location.

Aleppo’s countryside is completely controlled by the opposition forces, mainly made up of the Free Syrian Army that ousted the Islamic State in January 2014, but President Bashar al-Assad’s forces, now backed by the Russians, are trying to make their way back into the area. The suburb of al-Rashidin, which lies a few kilometers from Hawar, is witnessing violent battles with the opposition forces.

The ground was shaking under the impact of the explosions, but I stayed with Mansour and we stared at the sky in search of the plane. It was difficult to spot it since it was very fast and disappeared behind the clouds.

Mansour spotted another plane. To the north, a third. Each flew in a different direction. My heart was racing, and I held my breath while I tried to follow the planes with my eyes, wondering which of them was going to kill me. I tried to ignore these thoughts, and we went back home.

Russian planes only fly in fleets, and nothing like them were seen before the Russian intervention began in late September 2015. Syrians saw the fleets of military aircraft for the first time when the Russians came. Ever since, civilians have gotten used to distinguishing Russian aircraft from the regime’s warplanes, which fly alone.

Calm returned and the roaring of aircraft faded. We decided to go to Anjarah, which was about 4 kilometers (2.5 miles) away from our town. We got into our worn-out car. As usual, the Lebanese singer Fairuz’ soothing songs were playing on all the local radio stations. On our way to town, life seemed normal. Cars filled the streets and street vendors were busy making ends meet.

But the scene was completely different when we arrived in Anjarah. All the shops were closed, and ambulances carried the injured while the inhabitants watched in a state of shock. It was as though hell had broken loose.

The stairs of the “Western School,” as the townsfolk call it, were drenched in blood. A missile had hit the school building, but the structure still stood. However, children’s shoes were scattered on the ground and exam papers littered the courtyard.

One of the teachers agreed to speak to Al-Monitor on condition of anonymity, as he still travels to the regions under the regime’s control and fears that the security forces might arrest him for speaking to the press. He did not give us much information, but he clarified that the first raid targeted the school and killed 15 first-grade students along with their teacher. The staff emptied the other schools in the town minutes before they too were shelled.

Anjarah was targeted by four raids on Jan. 11 that hit a residential neighborhood and three schools, in addition to 18 other schools that were targeted by Russian forces during the first three months of their intervention in Syria, according to the Syrian Network for Human Rights.

A second-grade classroom was demolished when the air raid hit it dead center. The stench of blood and gunpowder filled the air while people searched the rubble for the remains of the victims.

“We only managed to pull out four bodies from the room, while the rest were just remains of bodies,” said Ahmed, whose clothes were covered with blood. He said he was the first to arrive at the school after it was bombed. Ahmed pointed to the corner and said, “This is where we pulled out the teacher’s body. She is a displaced woman from Homs. We also pulled out dozens of injured children, but I do not know their exact number.”

I will never forget the details of this incident.

While surfing the Internet, I was surprised to read a statement issued Jan. 15 by the spokesman for the Russian Defense Ministry, Igor Konashenkov. It read, "Our [air force] does not even plan airstrikes on such targets in the event of a threat of civilian deaths."

Konashenkov denied the results of a report published by Amnesty International accusing the Russian forces of killing hundreds of civilians. In his statement, which came in response to the shelling of the Anjarah school, he blamed the US-led anti-IS coalition for the incident. Oddly enough, IS was expelled from this town two years ago.

The international coalition did not comment on the Russian accusations. For his part, Gareth Bayley, the UK special representative for Syria, held Russia responsible for the bombing of the three schools in Anjarah, tweeting Jan. 12 that the raid was "deeply disturbing."

About two weeks after the incident, I passed by Anjarah by chance. Sadness and worry still engulfed the town that had lost at least 20 of its people. Its 10,000 inhabitants do not have any schools. All that is left is rubble and bloodstains that attest to the heinous massacre.