The "suspension bill" targeting Arab-Israeli parliamentarians is yet another element in Prime Minister Benjamin Netanyahu's strategy of incitement to deflect attention from international criticism of his policies. 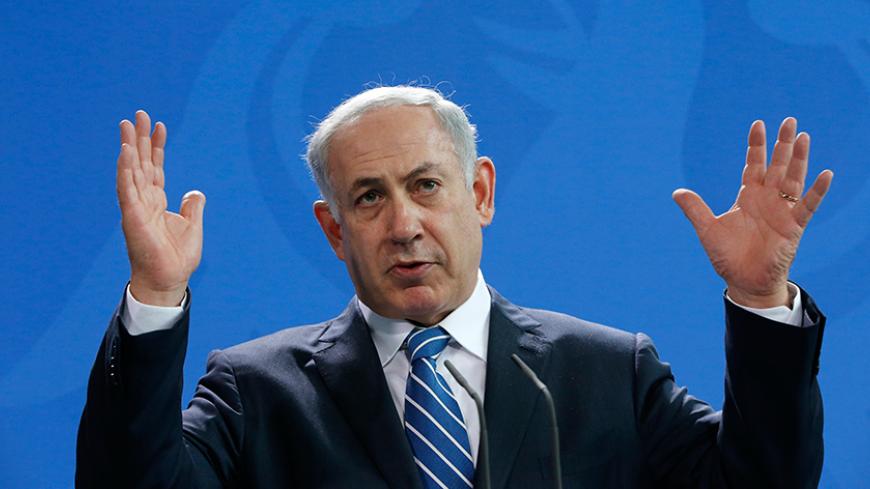 “Many voices in Israel understand democracy today in a narrow and minimal way. For them, democracy is just government by the majority.” This astute criticism was made Feb. 15 by Israeli President Reuven Rivlin. The main voice that the first citizen is referring to is that of Prime Minister Benjamin Netanyahu. Rivlin's observation was prompted by a new bill Netanyahu is proposing that would allow the Knesset to expel its own members. The Israeli media refers to the legislation as the “suspension law,” rather than the more precise “expulsion law.”

The following day, the prime minister dismissed Rivlin's criticism of the bill, which was introduced after the revelation that Balad Party members had met in early February with the families of Palestinians from East Jerusalem who had attacked Israelis. The bill is intended, Netanyahu argues, to allow the Knesset to suspend members who support terrorism.

“The Knesset can and must act against members of the Knesset who support terrorism and movements that explicitly call for the destruction of Israel,” said Netanyahu. He argued, “Democracy must protect itself. We won't allow for democracy to be taken advantage of in an effort to try and bring about its collapse.”

Netanyahu said these things at a press conference in Berlin while standing alongside German Chancellor Angela Merkel, the leader of a country that learned, at the cost of the lives of 6 million Jews, what happens to democracy when it does not protect itself. It might be that the prime minister had wanted to hint that Germany had paid a high price for allowing the democratic process to take advantage of it. Perhaps the German example had crossed the mind of Rivlin, in warning of the dangers lurking for a state whose political leaders interpret democracy as the rule of the majority, harm minority rights and breach the principle of equality among religions and ethnic groups.

This argument is certainly legitimate over principles between the school of the liberal president and the conservative camp on the question of the limits of freedom of expression. For years, this debate has preoccupied politicians and academics in democracies throughout the world. The bill that would allow the Knesset to suspend a member who has expressed verbal support for terrorism or for a terrorist, however, is not meant to protect citizens of the state. Not one hair on the head of an Israeli citizen would be harmed were the Knesset to make due with the existing law, which allows the elections committee to disqualify a list of candidates or a candidate supporting terrorism in writing or in deed, but not in speech.

Why then did the prime minister bother to place a call from Berlin to the chairman of the Knesset Legislative Committee, Nissan Slomiansky of HaBayit HaYehudi, to advance the committee’s debate of the bill to suspend Knesset members? What moved the busiest man in Israel to take some of his precious time to talk heart-to-heart with Knesset members of all coalition parties so they would support the bill?

It is hard to believe that Netanyahu truly fears that the visit of an Arab Israeli Knesset member to the home of parents whose son or daughter was killed when they carried out a terror attack would harm the security of the state. If the incitement of Israelis against Israelis has really kept him up at night, he should have supported the left’s initiatives to ban Lehava, the right-wing extremist group that specializes in incitement against Arab citizens. If he really considers the incitement of residents of the territories against residents of Israel the main reason behind the knife attacks, he should welcome with open arms the proposal by Palestinian President Mahmoud Abbas to renew the activity of a joint Israeli-Palestinian-American committee to address incitement. The proposal, which Abbas also mentioned at a January meeting with Israeli journalists, has not elicited a response from the prime minister’s office.

Netanyahu needs Palestinian “incitement” and legislative initiatives against his opponents like he needs air to breathe. He uses them to distract attention from international criticism of Israel's settlement policy, from the verdict on the abusive treatment of employees at the prime minister’s residence, from the public fight over the natural gas plan and from all the other dire straits that disturb the sleep of the Netanyahu family.

The suspension bill actually helps suspend the French peace initiative, which threatens these days to pick up momentum internationally as well as in Israel. This is how it works: In 2015, the Israeli government built 1,800 new housing units in the West Bank. (According to a Peace Now report, 40% of them are east of the separation barrier, territory that is supposed to become part of Palestine in any permanent agreement.) The occupation's entrenchment, and lack of hope for its end, increases tensions between Israel and the Palestinians and the international community. The Palestinians perpetrate acts of violence, international criticism of Israel grows and the boycott gains momentum. The left and Arab Israelis protest government policy, and Netanyahu accuses them of cooperation with Israel's enemies in a time of conflict The Knesset proposes laws to restrict activities by minority and human rights organizations. Thanks to the public focus on the legislative agenda, the government continues to build settlements, and so on and so forth.

Netanyahu’s strategy of incitement and distraction is anchored in an orderly worldview. He expressed it well at the press conference with Merkel when he was asked for his response to the new French initiative. “We are not the root of the problem in the Middle East, we’re an important part of the solution,” he said. “If Israel would not be there,” Netanyahu explained, “the entire western part of the Middle East would be flooded by the forces of radical Islam and many more millions would ride this flood to Europe. Israel is a defensive shield of Western civilization in the heart of the Middle East.”

Woe to any Western civilization whose “defensive shield” is a democracy that rules millions of people under military occupation. Woe to any nation whose leaders specialize in the demonization of minorities and human rights organizations and use the troubling excuse of a democracy protecting itself to hunt them down.