As the fifth anniversary of Libya's revolution draws near, thousands of displaced Libyans are still living as refugees in their own country, with virtually no official recourse. 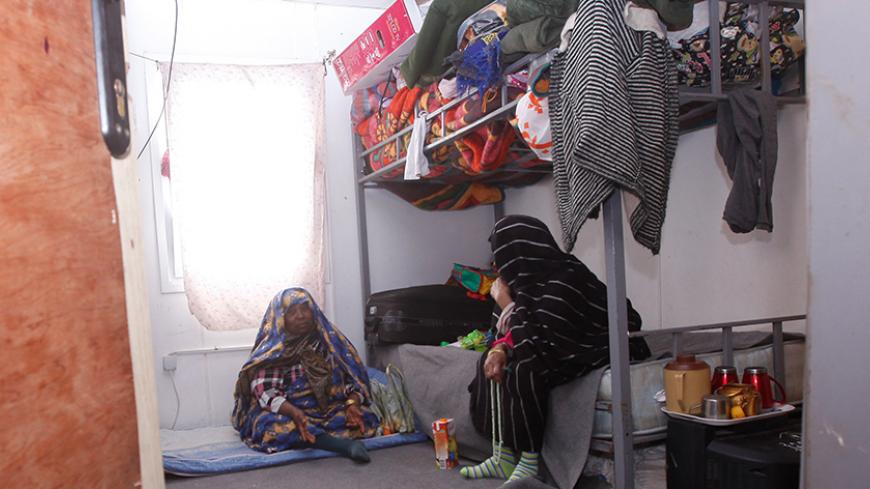 Women from the Libyan town of Tawergha sit in their makeshift home at the Fellah construction site in Tripoli, Feb. 13, 2013. - REUTERS/Ismail Zitouny

The airport road camp, some 15 kilometers (9 miles) south of Tripoli, is home to 355 families totaling more than 1,800 people — a third of whom are children. Of these people, 350 are from the stricken town of Tawergha and the rest are families displaced from the capital as their homes were damaged in the 2011 civil war and are still not repaired.

The overwhelming majority of the camp residents are black Libyans who used to live in the coastal town of Tawergha, less than 40 kilometers (25 miles) east of Misrata. The town of an estimated 35,000 residents was almost completely destroyed during the war, and in the final days of the regime, its entire population — accused of supporting regime forces — was forced to flee.

Mabruk Eswesi, founder and chairman of al-Saber (Patience) Association, told Al-Monitor, “We had to leave because we were fired at indiscriminately. Anyone captured could be killed on the spot or taken into detention. Misrata militias were seeking brutal revenge, accusing the entire population of supporting the former regime.”

Sensing the troubles ahead for his community, one already tagged as Moammar Gadhafi supporters, Eswesi and his friends set up al-Saber to keep people together and give them a “voice in dealing with the situation they have found themselves in.”

Accompanied by some 10 families, Eswesi first arrived in the camp on Aug. 23, 2011. Tearfully, he said friends in Tripoli “told me about this place, which used to be a site for a Turkish construction company that left Libya in the earlier days of the unrest in February 2011.”

Today the Airport Road camp, as it is known, is the largest of three scattered around the capital. The entire place is no more than a huge hanger crudely divided into small living places and other rooms. Cardboard, sheet metal and wood are used to make what looks like small apartments of two and three bedrooms.

Local charities and businesses provided some of the material, while volunteers did the work. International charities also help from time to time with donations through a multilingual website.

The camp is situated on some nearly 2 square kilometers (0.7 square miles), and rubbish dots its entrance. Quick to adjust to their new lives as refugees in their own land, the people of Tawergha try to live normal day-to-day lives. Using whatever means available, they have built a small school, a prayer room and a larger room they call the events room, where, Eswesi said, "We receive visitors and organize weddings, birthday parties and occasional small gatherings.”

The school is small, intended for younger school-age children and lacks almost everything, forcing older children to attend nearby schools, making the daily trip in the freezing Tripoli winter. The nearest such school is about 10 kilometers (6 miles) away.

Inside the events room, half a dozen men gathered around a small fire to stay warm while watching TV and sipping strong Libyan green tea. They welcomed us for a small chat. One of the old men told us, “As you see, we are refugees in our own country. … Who could have thought that Libyans like us could live in refugee camps depending on charity and handouts?"

The portion of displaced Libyans inside and outside the country has grown to almost a third of the population since the revolt and civil war erupted in 2011, leading to NATO intervention to topple the former regime and plunging the country into chaos.

While political factions struggle over power and the UN struggles to bring about some kind of government, displaced Libyans like the people of Tawergha remain a side issue.

As the representative of his people, Eswesi tries to work with different government departments and has to visit Tripoli almost every day, risking his life. Today, Libya is still divided, with two different governments. The Tripoli-based, Islamist-backed, Misrata-dominated government does not recognize the refugees and provides no help at all.

Eswesi has been picked up five times by armed militias and jailed for different periods for no reason other than the color of his skin. Three years ago, “When I would be in the city, people would call me names and swear at me for no reason. Checkpoints — which I had to go through — used to be a nightmare. Now it’s much better than before, and I can go everywhere with little trouble — but not at night,” Eswesi said.

His colleague Aida, who refused to disclose her full name for security reasons, handles relations with local and foreign civil organizations. Over the last five years, many local and international organizations have visited the camp, including the UN. “But little has been done to help us return home to Tawergha,” Aida told Al-Monitor, sobbing.

Amid the chaos in early 2012 and later in 2013, militants kidnapped some 30 refugees from the camp. Not all of them have been released. Eswesi preferred not to share their names for security reasons and was also hesitant to give their exact number.

As the fifth anniversary of the Libyan uprising, known as the “February 17 Revolution,” draws closer, many Libyans are preparing to celebrate. Tawerghans will certainly have nothing to celebrate. What they really want is to be able to go home and resume their normal lives in Tawergha in peace and harmony. However, they are not hopeful that such a dream will be realized anytime soon.