The crisis over unpaid wages has already pushed several in Gaza to commit suicide, a trend that seems ulikely to be reversed soon. 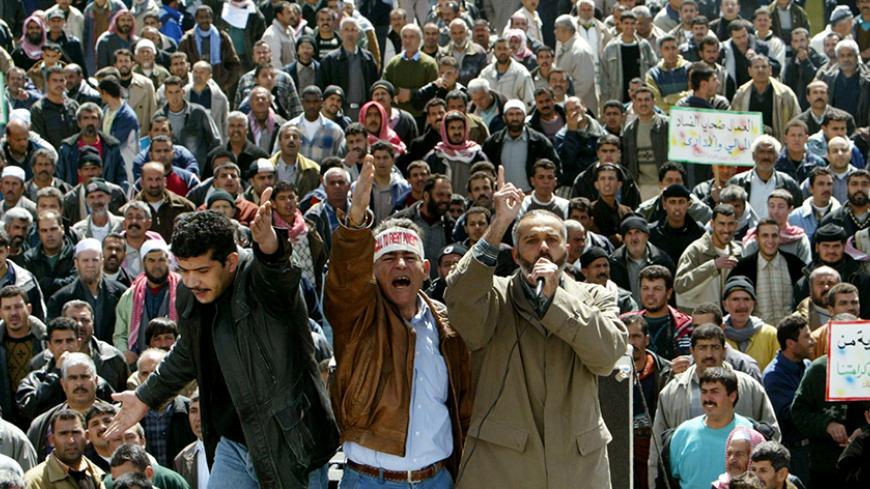 Palestinians demonstrate in front of the parliament building in Gaza City after hundreds of unemployed workers called for jobs and unemployment benefits, March 12, 2005. - REUTERS/Mohammed Salem

GAZA CITY, Gaza Strip — Rizk Abu Sitta climbed up to the top of the Radio Israa tower above the Dahdouh building facing Al-Azhar University in Gaza City Feb. 9. Though some observers at first thought he was a worker performing a repair, he was trying to commit suicide. Hundreds of people gathered to watch the young man standing between the iron bars on the top of the tower.

Police officers also joined the crowd and prevented people from going up to the rooftop. One of the workers at the radio station told Al-Monitor on condition of anonymity, “One of the building residents told us that there was a man on top of our tower, thinking that he was one of our employees. We immediately cut off the power to the transmission tower and informed the security services.”

Al-Monitor managed to go up to the rooftop, where the tension among the police and the man’s relatives was clear. One of the police officers said, “We did not climb up the tower that the man had climbed as we feared he might throw himself off. We are trying to communicate with him through his cell phone.”

Abu Sitta was standing between the bars, not moving a muscle, covering his face with his hands. The man seemed to be well aware of the danger he had put himself in, and his grip on the iron bars showed that he was reluctant to let go.

His cousin Hussam told Al-Monitor, “We are calling his cell phone but he is not answering me or his mother. He is desperate because of the dire economic conditions, and his salary has been cut off for several years now.”

Abu Sitta lives in Khan Yunis, in the south of the Gaza Strip. As a member of the Palestinian Authority’s (PA) security services, he is supposed to get paid by the Ramallah government. He is an only child. His father was killed and his mother was once detained in an Israeli prison.

His mother, Fatima Abu Bakra, was sitting under the tower crying. “Please, people, tell me my son is fine,” she said.

Abu Sitta was still on the tower above the Dahdouh building. One of the police officers asked Al-Monitor’s correspondent to take his mother down to the lower roof.

After calming down, Abu Bakra told Al-Monitor, “My son has not received his salary for five years. He has seven children and his debts are accumulating. May god take revenge on the oppressors.”

Tahsin Bakr, who heads the volunteer committee advocating for the workers who are not receiving paychecks, was also present on the rooftop. He told Al-Monitor that Abu Sitta is one of 300 workers whose salaries were cut off because of malicious reports against them. He said that these reports are sent by Ramallah government employees based in Gaza or abroad. Bakr said that the majority of those affected work with the security apparatus and the rest are employees in the civil sector.

“They file these reports for personal reasons or after receiving false information that we are working for the Hamas government in Gaza. Therefore, the Ramallah government cut off our salaries,” Bakr said. These workers staged a protest in June 2015 at the house of Zakaria Agha, a member of the Fatah Central Committee, demanding to be paid.

Bakr, who has not been paid since 2007, went on, “We are always accused of not abiding by the rules of the [Palestinian] Authority, represented by President Mahmoud Abbas, which we have never been against.”

He said that Abu Sitta has been talking to anyone who might be able help him, but to no avail. He explaind, “There are 2,300 employees who have voluntarily chosen to work with the Hamas-led government since 2007, after the Ramallah government cut off their paychecks, and they are now getting paid by Hamas.”

According to him, only 300 PA employees in Gaza are still receiving their salaries from Ramallah.

When Hamas seized military control of Gaza in June 2007, Abbas ordered PA employees in all the governmental and security institutions in Gaza to stop their work, though he promised they would continue to receive payment. Some chose to work with Hamas-affiliated security agencies and government ministries to complement their salaries.

Abu Sitta was finally talked out of his decision to kill himself after Fatah official Ibrahim Abu Naja went up and confirmed to him that Abbas will make sure that he will be paid.

Five hours after the ordeal began, Abu Sitta climbed down slowly and was received with cheers as his crying mother embraced him. However, his possible victory does not mean that the salaries of the rest of the employees will be paid.

Shujaa al-Safdi is another worker who has not been paid since early 2008. He told Al-Monitor, “I have never worked with a government led by Hamas, and yet my salary has been cut off along with my colleagues' as a result of malicious reporting. We have tried to do something about it, but to no avail. We are now working in other fields … to make ends meet.”

Safadi, who was a researcher for the Palestinian State Information Service — which was later on subsumed by the Palestinian news agency Wafa in 2008 — added, “We are being unjustly treated, as those who are writing malicious reports against us hold higher positions with many privileges and benefits.”

For his part, Faisal Abu Shahla, a Fatah parliamentarian in the Palestinian Legislative Council, told Al-Monitor, “We have and continue to call for the rights of the employees who have been wronged because of malicious reporting. They have never worked with the Hamas-led government and do not have any other source of income. However, officials keep responding to us with empty promises.”

Abu Shahla confirmed that the Palestinian president's office had previously formed a committee in November 2014 to address the issue. He stressed that the concerned workers have appealed more than once to the Fatah parliamentary bloc to claim their rights, but “unfortunately matters are still suspended,” he said.

The dire living conditions in Gaza have driven many people to despair. Since the beginning of this year, six others have attempted suicide, and four of them have died.

No solutions appear on the horizon in Gaza. The reconciliation between Fatah and Hamas is stalled, so is the reconstruction process. Poverty and unemployment rates are still soaring. Meanwhile, all officials do is criticize the hopeless young people who have killed themselves, as suicide is a sin.