Israel's energy minister sparked anger with statements he reportedly made about security cooperation between Cairo and Tel Aviv. 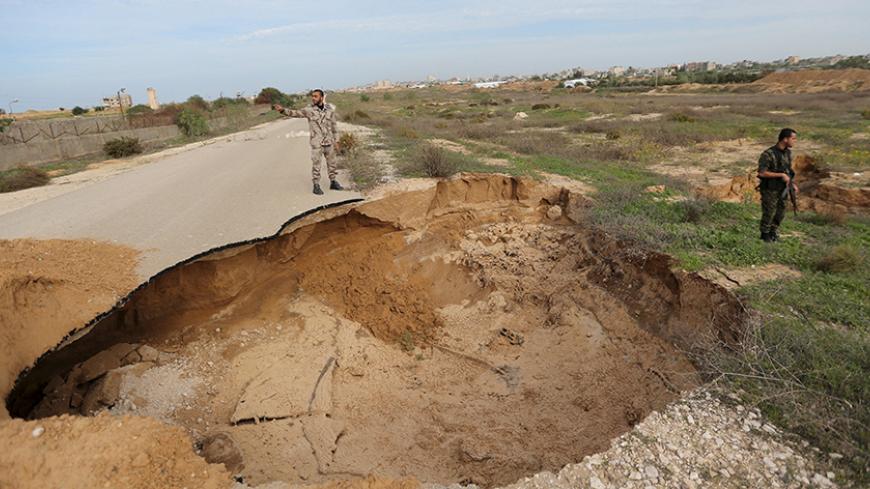 Members of the Palestinian security forces loyal to Hamas stand guard as they view a landslide caused by floodwater pumped by Egyptian forces to destroy a network of Palestinian tunnels, near the border between Egypt and southern Gaza Strip, Nov. 26, 2015. - REUTERS/Ibraheem Abu Mustafa

On Feb. 6, The Times of Israel published statements by Israeli Energy Minister Yuval Steinitz, who said Egyptian President Abdel Fattah al-Sisi has flooded the tunnels on his country's border with the Gaza Strip at “[Israel’s] request.”

Steinitz, a member of the Likud Party led by Israeli Prime Minister Benjamin Netanyahu, is widely reported to have said the procedure is a good solution, it came in response to pressure from Tel Aviv and “the security coordination between Israel and Egypt is better than ever.”

His remarks regarding the extent of the security cooperation between Cairo and Tel Aviv caused a debate inside Israel and angered the military. Egyptian officials and media ignored his statements.

In a phone conversation with Al-Monitor, Egyptian Foreign Ministry spokesman Ahmed Abu Zeid said Egypt does coordinate security with Israel as required under their peace treaty, but he denied that the Israeli minister had made the statements attributed to him.

In this context, Israel's Maariv daily newspaper published a report Feb. 6 by military affairs analyst Yossi Melman, who revealed that Israel’s security leadership has imposed strict control over all details of the security cooperation between Cairo and Tel Aviv, based on Egyptian recommendation.

Observers have described the peace between Egypt and Israel as only formal. They say the normalization movement hasn't succeeded in the eyes of the Egyptian public because Israel is an occupying power.

Salem told Al-Monitor that officials consider several elements in deciding to hide such information, especially national security and domestic political issues, where such information can be used as a weapon in the hands of activists “who do not understand a thing."

About the possibility of announcing such information to the Egyptian people, as stipulated in the constitution of 2014, Salem said the public wouldn't accept any kind of coordination with Israel.

Tarek Fahmy, a professor of political science at Cairo University and head of Palestinian and Israeli Studies at the National Center for Middle East Studies, told Al-Monitor by phone that such statements are nothing new and that security coordination is in the interest of both parties.

When the interests of Israel and Egypt converge, this does not mean that the latter is providing concessions, but “what concerns us first and foremost is to protect the Egyptian border, not to protect Israel," Fahmy said.

About the security situation in the Sinai Peninsula, Fahmy said increasing the number of soldiers and the amount of military equipment there would be a breach of the peace treaty, but Israel has tacitly approved such moves because it helps its security and stability. He pointed out that the Camp David treaty will remain a cold peace.

Fahmy said Steinitz's remarks will not affect relations between Tel Aviv and Cairo, or how the public views the Egyptian president. He added that Sisi's attitude toward Israel is “positive” and will improve in the future.

In a related development, Gilan Jaber, a member of the Egyptian Council for Foreign Affairs, told Al-Monitor coordination with Israel will not affect Egypt's support for the Palestinian cause.

Al-Monitor contacted a Palestinian journalist who lives in the Gaza Strip and asked about the situation. She said Egypt wants to demolish the tunnels to protect its security. Speaking on condition of anonymity, she added that the remaining tunnels probably belong to Hamas and serve partisan or personal interests, and are thus not for the benefit of the Palestinian people. She agreed with Jaber that the political interests shared by Cairo and Tel Aviv will not affect Egypt’s interest in the Palestinian cause.

It should be noted that the Egyptian government does not want to be seen in the Arab world as acting against the Palestinians.

Adham Abu Salima, spokesman for the National Commission to Break the Blockade and for Reconstruction, also lives in the Gaza Strip. He said the tunnels are a result of the blockade and are Gaza’s “lifeline.” He told Al-Monitor that Gazans have always looked to Egypt for support, since Egypt is their only Arab neighbor.

Abu Salima demanded that Egypt open the Rafah crossing and work with the people of Gaza to both protect Egypt’s national security and contribute to lifting the blockade. He also said the tunnels should not be demolished by flooding, which can harm the environment, agriculture and groundwater.

In late 2014, Egypt began establishing a buffer zone on its border with the Gaza Strip and demolished hundreds of tunnels. Egyptian authorities accused Palestinian militants in Gaza of using the tunnels to transfer weapons to armed groups active in Sinai. But Hamas accused Egypt of worsening the damage caused by the Israeli blockade by demolishing tunnels that have long been used to transport goods and passengers to and from the Gaza Strip, home to about 1.8 million people.