Will Yemen’s journalists fare better in 2016?

In 2015, some journalists in Yemen suffered so much harassment and abuse that they quit their jobs and fled the country. 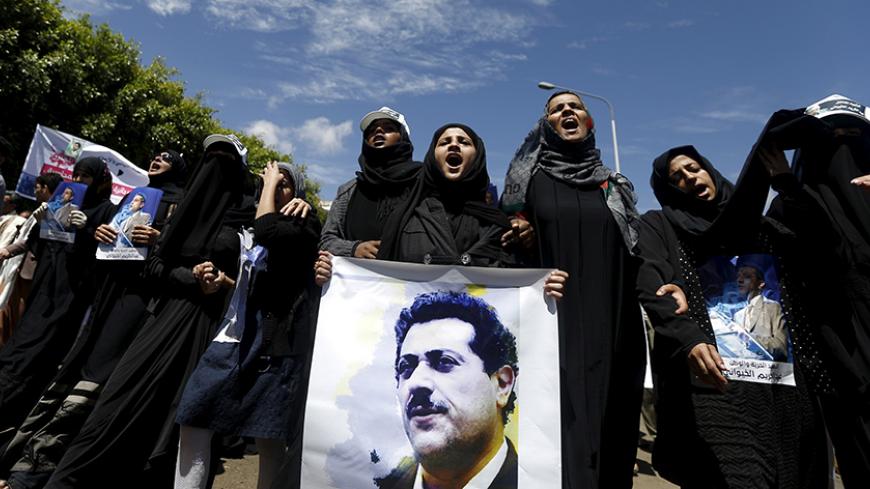 Relatives of journalist Abdul Kareem al-Khaiwani attend his funeral procession in Sanaa, March 24, 2015. Khaiwani was shot dead by assailants on a motorbike last week. He was one of Yemen's top journalists, close to the country's dominant Houthi group, police sources said. - REUTERS/Khaled Abdullah

SANAA, Yemen — Houthis in Yemen have been detaining, kidnapping and even using journalists as “human shields” in military barracks targeted by the air force of the Saudi-led Arab coalition.

The year 2015 dealt a major blow to press freedoms in Yemen amid growing concerns over the fate of at least 13 journalists who continue to be held by rebels with no news about their situation for a month.

Marwan Dammaj, secretary-general of the Yemeni Journalists’ Syndicate (YJS), sounded the alarm as Houthis expanded their attacks against journalists. “Yemen’s journalists need to take broader action. Journalists are being horribly tortured in the prisons of [the Houthi] militia,” he said.

The YJS secretary-general pointed out that “as a result of all of these attacks, hundreds of journalists lost their jobs and sources of livelihood.”

Meanwhile, Reporters Without Borders classified the Houthis as the second-largest hostage-takers of professional journalists, following the Islamic State (IS).

The organization said the abduction of journalists has become a “common occurrence” ever since the group seized Sanaa in September 2014. It is now second only to Syria as the country reporters are kidnapped the most.

Sanaa is now devoid of media outlets opposing the Houthis' de facto authority, especially since many daily and weekly newspapers were forced to suspend their publications and were politically and systematically abused by Houthis, according to Reporters Without Borders. The group said many of Yemen’s journalists have left their homes for villages and rural areas or fled the country entirely; the total has been estimated to be as high as 500.

Yemeni journalist Fares al-Humairi told Al-Monitor, “Journalists paid an exorbitant price during the last months of the war. About a dozen colleagues have been killed while 13 others continue to be detained in Houthi prisons after some were released.”

The press experienced its worst incident as Abdullah Kabel and Joseph al-Aiziri, two journalists detained by Houthis, were killed at a military site targeted by the Saudi-led Arab coalition air force in May south of Sanaa. This prompted the YJS to accuse the Houthi group of “using journalists as human shields in an unprecedented, deliberate murder carried out by an unruly and irresponsible group.”

Amer al-Dumaini, deputy editor of Al-Nas weekly, told Al-Monitor that the militia’s war on the media is an essential part of the war waged by Houthis on the various media outlets of different affiliations. “This war was obvious since the first day of the coup,” he said.

Dumaini added, “The [Houthis] are so focused on journalists because they are aware of the importance of the media and the role the media could play in exposing the group’s behavior and violations.”

That is why, he said, the group rushed to storm the capital, Sanaa, on Sept. 21, 2014, and install its own people in the TV sector to spread misleading information and promote its own ideas and policies.

“With the start of the Operation Decisive Storm military operations, the Houthis’ harassment grew so violent that it was tantamount to a crime whose perpetrators should be sentenced to a death sentence, imprisonment and execution,” Dumaini told Al-Monitor.

Dumaini pointed out that the group’s war was “aimed at muting the opposition media outlets through a set of repressive and arbitrary measures that affected the civil, independent and partisan media outlets in the country.”

Chief among these measures, Dumaini said, are the “storming and looting of media outlets and the suspension of their printing operations.”

“Add to this the blocking of news websites for surfers in Yemen as well as acts of harassment and violence against journalists,” he said. “These acts included stalking, kidnapping, murdering, imprisoning and torturing journalists.”

On Oct. 13, three reporters were arrested in the Hadramout province (in eastern Yemen) after covering a demonstration in the Mukalla provincial capital to demand the departure of al-Qaeda militants from the city. Those arrested were Amir Baaweidan, a reporter at the local Azaal TV channel; Mohammed Mokri, a reporter at Yemen Today newspaper; and cameraman Akram al-Yamani. This means that the rebels have not been the only ones attacking journalists and that other armed groups also took part in these acts.