Is a witch hunt underway against Turkish intellectuals?

Following the arrests of Turkish academics who had signed a petition in support of the Kurds in southeastern Turkey, the country is facing an unprecedented 'civil war.' 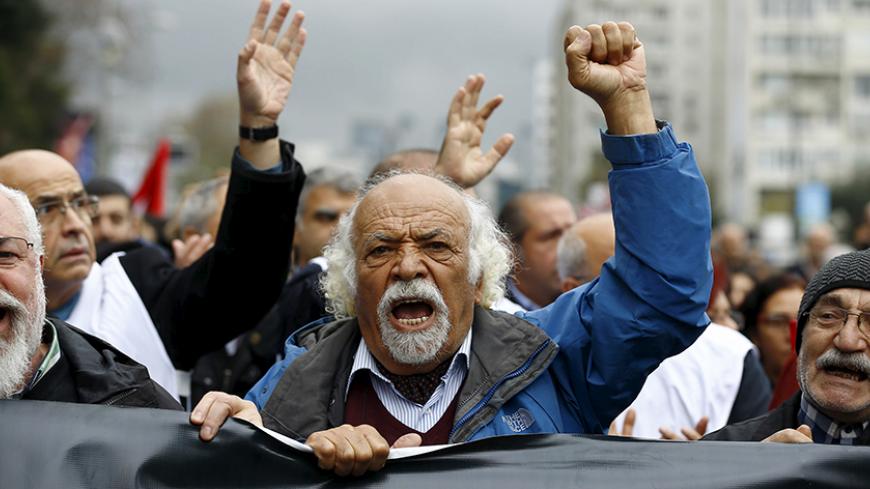 Demonstrators shout slogans during a protest outside the headquarters of Cumhuriyet newspaper, whose editor-in-chief Can Dundar was arrested on charges of espionage and terrorist propaganda, in Istanbul, Nov. 29, 2015. - REUTERS/Osman Orsal

A petition signed by 1,128 Turkish academics and supported by scores of world-class intellectuals ranging from Noam Chomsky to Immanuel Wallerstein and Etienne Balibar has exposed the prevailing nationalistic and jingoistic frenzy in Turkey. But much more important than that, it indicated that the authoritarian drift of the Turkish regime is moving into a stage of totalitarianism that reminds one of passages from George Orwell’s "1984."

It all began with a press conference held simultaneously in Istanbul and Ankara by academics from various Turkish universities. They announced the petition signed by 1,128 academics from different fields at universities in Turkey and abroad, including Turkish scholars affiliated with Harvard University, Cambridge University, Humboldt University of Berlin, Paris-Sorbonne University and many others from Stockholm to Los Angeles, Amsterdam and Milan. They stated that they were part of the Academics for Peace Initiative.

The strong-worded petition in both Turkish and Kurdish under the title “We do not want to be partners to the crime” demanded that the government lift the curfews — which have been in place for weeks or even months in some places — in various Kurdish towns in the southeast of Turkey, where an armed confrontation is raging between Kurdish militants and the Turkish security forces. Casualties from the civilian population and security forces dangerously drift the country into a civil war. While accusing the Turkish government of its heavy-handed approach to the Kurdish issue, the petition also invited all parties involved to sit down at the negotiation table to seek a political and peaceful settlement to the conflict.

It did not take long for them to be rebuked and reprimanded by, not surprisingly, President Recep Tayyip Erdogan. Employing an extremely harsh wording that has been a characteristic of his speeches and discourse for a long time now, Erdogan attacked the academics and labeled them as “so-called intellectuals, unscholarly” during the annual Ambassadors Conference in Ankara. His speech came only hours after the suicide attack in Istanbul on Jan. 12. He only paid a lip service condemnation to the Islamic State’s terror victims.

Erdogan said the academics who signed the petition were “shadowy” instead of being “enlightened,” and to him, those “so-called intellectuals” were merely tools of propaganda of the “terrorist” Kurdistan Workers Party. What they had committed was “treachery.”

The next day, Sedat Peker, a crime boss who was imprisoned for several years for organized crime connections, showed solidarity with the president and announced that “the bloods of those so-called intellectuals will be spilled,” and that he would be “delighted to take a shower with their blood.”

Ultranationalist Peker had made similar remarks in Turkey’s Black Sea province of Rize — Erdogan’s ancestral hometown — just a day before the Ankara massacre that took the lives of 102 people in the heart of Turkey’s capital on Oct. 10, 2015.

The blood of Turkey’s academics, whose numbers have climbed to more than 2,000 signatories on the petition following the accusations and insults by the president, perhaps has not been spilled yet, but Erdogan has unleashed a McCarthyist campaign of slander, threats and even physical assaults endangering their lives — unprecedented persecutions are underway against them.

In the central Anatolian towns of Sivas and Kayseri, two professors who signed the petition were attacked by knife-wielding assailants and were forced to leave their university positions. They likely will not be able to go back to those cities. At many other universities, administrative measures are being taken to expel the signatories of the petition.

On Jan. 15, Turkey woke up to the news that 14 academics of Kocaeli University in the northwestern province of Izmit, some 60 miles from Istanbul, were taken into custody for alleged “terror propaganda” and “insulting the government.” In the Mediterranean province of Mersin, 20 academics were rounded up, and five academics from the southeastern province of Gaziantep near the Syrian border met the same fate.

These latest arrests followed Erdogan’s second round of accusations against the Academics for Peace Initiative. The president said Jan. 14, “Certain institutions of the state will do whatever is needed in order not to leave those so-called academics, ignorant people untouched.”

Reminiscent of the darkest days of German academics, particularly those of Jewish descent during the early period of Nazi power, the wave of intimidation and the unprecedented witch hunt against the Turkish intellectuals is likely what Turkey will be witnessing in the near future.

How this might affect Turkish nationals who live abroad and who signed the petition is uncertain at this time. Would they be detained and dragged to their homeland for investigations, or would they be forced to seek political asylum in their place of residence?

A global solidarity campaign is currently being organized in support of the Turkish academics; the "Solidarity of the Literary Personalities" campaign by famous novelists, short-story and essay writers had reached 558 signatories at the time of writing this article. A campaign by actors and filmmakers has so far reached 400 signatories.

This is a kind of “civil war” between the president, staunchly nationalist body politics and segments of Turkish society with its liberal, leftist, progressive intellectuals and with hundreds — if not thousands — of academics from every field and of every age.

Turkey has never lived such an episode before. Therefore, it is impossible to know how long this “civil war” will last and how it will end.