The US ambassador’s comments on respecting freedom of speech are challenged by Ankara's mayor — a shrewd social media expert — but not by the government. 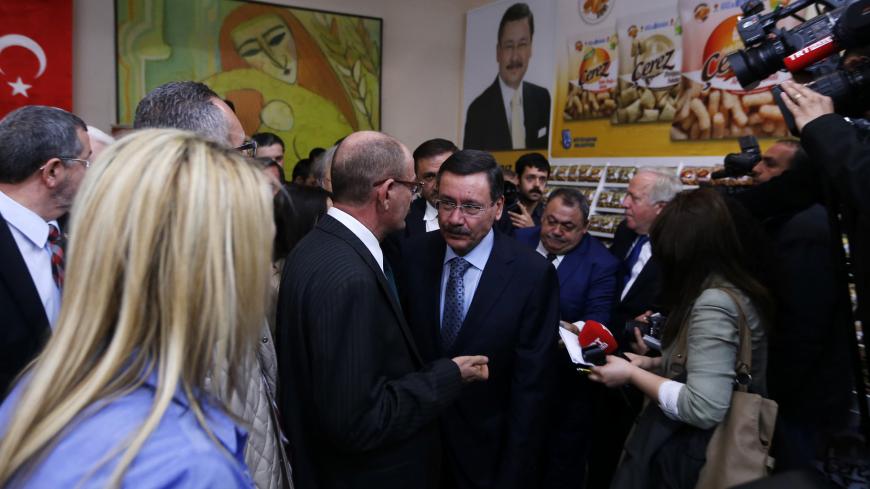 Ankara Mayor Melih Gokcek (C) of the ruling Justice and Development Party attends an event as part of his re-election campaign in Ankara, March 18, 2014. - REUTERS/Umit Bektas

Melih Gokcek has been the mayor of the Turkish capital, Ankara, since 1994. He is known as a flamboyant and loquacious member of the Justice and Development Party (AKP) and is quite active on social media. He appears on television frequently and has over 3 million followers on Twitter. He frequently engages pundits and colleagues into virtual duels.

On Jan. 15, Gokcek’s target was US Ambassador John Bass. Bass recently gave an interview to the pro-government daily Sabah where he had criticized terror activities, particularly those of the Kurdistan Workers Party (PKK). This news was shared widely by pro-government networks as a sign of US support for Turkey against separatist movements.

Yet the mood changed quickly when the US Embassy posted a brief message indicating the ambassador’s support for freedom of expression for academics who signed a petition titled “We do not want to be partners to the crime,” which asked the Turkish government to find a way for peace in the southeast. As Al-Monitor’s Cengiz Candar has written, the government sees the petition as supporting terrorism. Consequently, the academics were targeted on multiple fronts, with some being detained or suspended. The social pressure against them was not limited to traditional virtual attacks. It also involved marking office doors of academics who signed the petition, and even publicizing their home addresses, the religious affiliation of their spouses and occupations of their parents.

Bass’ statement read: “Expressions of concerns about violence do not equal support for terrorism.” Bass said that while the United States “may not agree with the opinions expressed by those academics,” he emphasized US support for freedom of expression, regardless of the contents of the petition.

Yet, what might seem to many a simple generic document from the US Embassy was branded as a direct attack on the government by the mayor. Gokcek shared 10 consecutive tweets on Jan. 15 directly addressing Bass. His tweets received hundreds of retweets and promptly became a trending topic in Turkey. The news that Gokcek declared Bass persona non grata made the headlines in national media outlets.

In his Twitter feed, Gokcek said, “Bass is incapable of comprehending what he reads. Those shady academics are saying there is a massacre against the armed terrorists. Dear Bass, in the US, the police shoot citizens like pears for simply not putting up their hands.” “And you guys call this [method] security? In our country, heavily armed terrorists are attacking the police and soldiers. You tell us to accept it in the name of democracy. Well, we cannot.” Gokcek then shared some photos of the PKK’s devastating attacks, with collapsed buildings and a few YouTube videos displaying PKK violence. He wrote: “Bass, apologize to Turkey. Take a look at these [videos and photos] where PKK killed babies yesterday. Perhaps your blind eyes will see. You are the wrong choice for Turkey. I think you should go back to your country. Another ambassador who knows us should take your place.” Gokcek concluded by stating that Turkish officials are trying to bring US-Turkey relations to their best level, while Bass is personally damaging the relationship. He recommended that Bass should at least know when to remain silent, and “not back these academics who support murderers.”

On Jan. 16, US State Department spokesperson John Kirby addressed the issue at a daily press briefing and reiterated Bass’ comments that the United States is concerned about a “troubling trend” in Turkey. Addressing a question about Gokcek’s comments, Kirby said, “Turkey has no better friend than the US and that is certainly represented in Ambassador Bass. Nobody is more committed in seeing Turkey succeed and to live up to its own constitution and democratic values than Ambassador Bass. It is because he deeply cares about the Turkish people and the health of the Turkish democracy that he spoke the way that he did, he issued the statement of concern that he did.”

Kirby emphasized the issue was not even about supporting the academics, but a matter of principle for the United States. “It wasn’t picking sides on the academics' arguments or not. That was not the issue; in fact, you can look at the statement and he makes it clear. It was the idea of being able to express opinions freely and openly and to challenge government in a peaceful, democratic way.”

Yet looking at the arguments these remarks generated in social media, it is difficult to say that Kirby’s point is a concern for the general public. Most social media accounts addressing directly Gokcek’s tweets were divided into two camps: those who criticized the United States for its own police brutality, and others who recalled that during the 2013 Gezi Park protests, Gokcek had saluted the police for attacking unarmed protesters. Similarly, on Eksisozluk — a public information sharing website known to be critical of the AKP — most comments either ridiculed Gokcek as an Internet troll or were laden with virulent anti-Americanism.

Gokcek reached his goal of diverting attention away from the idea of freedom of expression to that of standing with or against terrorists. The crux of Bass’ message, that verbal expression of concern for violence is not the same as support for terrorism, was lost to the public. Indeed, the debate in Turkey took a path in the opposite direction to justify further and deeper restriction on freedom of expression. There are a few reasons for that.

First, the majority of Turkish public finds the AKP unsuccessful in dealing with the PKK. The latest public opinion polls from respectable sources such as Kadir Has University of Istanbul confirm this point as casualties rise due to PKK and Islamic State (IS) terror all around the country. By labeling any criticism as terrorism, the government is attempting to generate a rally-around-the-flag effect and a strong justification to silence dissent. For example, on Jan. 6, Prime Minister Recep Tayyip Erdogan said, “In colleges, schools, hospitals and in any public office, those who stand by the terror organization should be promptly exposed.” This seems to result in pro-AKP trolls turning the US Embassy as an adversary by tweeting photos of victims’ coffins and threatening, “Look at this and know your place.”

Second, many research institutes have documented that the level of trust among Turks or with foreigners and foreign countries is rather low. Anti-Americanism thus provides positive payoffs for flamboyant public figures such as Gokcek. Al-Monitor contacted 18 American expatriates in Turkey who all concurred that anti-Americanism is felt strongly on a daily basis. An English teacher who has been working in Istanbul for the last five years told Al-Monitor on condition of anonymity, “Yes, I believe what the ambassador has done is right. Yet as an American woman, I also fear that xenophobia is now displayed more frequently and ferociously. People I interact with on a daily basis directly hold me responsible for all US actions; in one day I counted 12 times I had to say I am not a representative of the US government, just a teacher. People blame the US for supporting the PKK as well as IS. But then again, they also blame Russia and Iran all the same.”

In general, populist rhetoric can be used to temporarily distract public opinion. But if the rhetoric is repeated often enough, it can redirect the public's focus from issues that really matter. In the case of the US ambassador being declared persona non grata by the mayor, we see that US and foreign policy pundits seemed to care much more about the issue than the Turkish government itself. The Turkish government did not even refer to the spat. One anonymous pundit closely associated with the AKP told Al-Monitor, “People view Gokcek as a troll in Ankara, no one takes him seriously, so it does not really matter. When [Vice President Joe] Biden arrives in Ankara next week, it will all be sorted out nicely.” And when Al-Monitor asked about freedom of expression, the answer was, “Once we have security, then we can talk about it.”