In an illustration of Turkey's increasing polarization amid ongoing clashes in the southeast, Turks are split over whether popular media personality Beyaz spread "terrorist propaganda" by encouraging applause for a concerned caller from Diyarbakir. 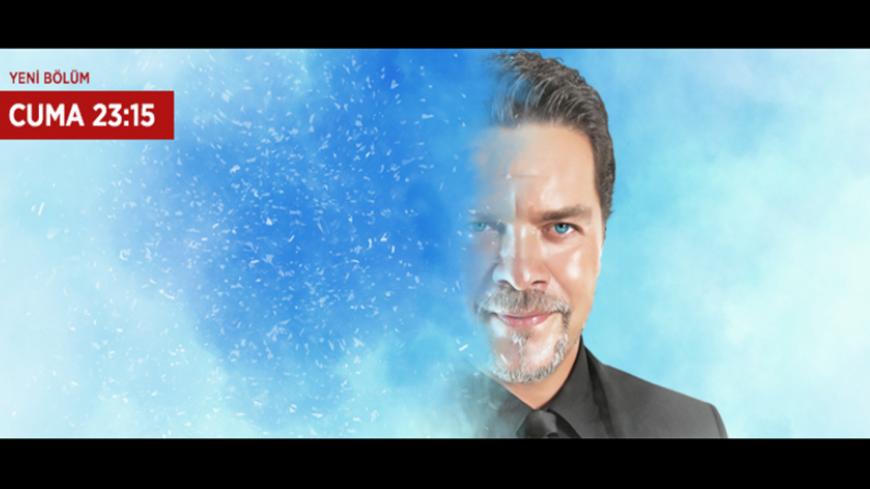 Beyazit Ozturk, host of the "The Beyaz Show,” poses in an advertisement for his program, Oct. 24, 2015. - The Beyaz Show

The color white is a popular symbol of innocence and purity. This might have been one reason Turkish celebrity Beyazit Ozturk named his immensely popular program "The Beyaz Show." His stage name, “Beyaz,” means "white" in Turkish. As a fixture on Turkish television for 20 years, his name is a household word. He has hundreds of thousands of fans, especially among the young.

On the night of Jan. 8, something unprecedented on Turkish television happened on "The Beyaz Show." During the talk show, watched live by millions of people, a woman called in and introduced herself as Ayse Celik, a teacher from Diyarbakir. Clashes have been raging for months between Kurdish militants and the security forces in this largest city of the mainly Kurdish southeast. She delivered a message few would have expected on an entertainment program.

“Are you aware of what's going on in the country’s east? What's happening here is misrepresented on television. Don’t stay silent! Please show more sensitivity as human beings! See us, hear us and give us a hand!” she said.

As the teacher spoke, Beyaz stood up and listened attentively. After Celik concluded her remarks, the showman — a pop-culture icon with no record of political activism — prompted the studio audience, mostly young people, to give her a big round of applause. And then, all hell broke loose in Turkey.

In an illustration of the country’s increasingly toxic polarization amid ongoing clashes in 13 urban areas in the southeast, Turks were split, either accusing Beyaz of “making terrorist propaganda” or standing behind him. A heated debate erupted: Has Beyaz turned out to be a “terrorist,” too? Did his show spread propaganda? Or did he criticize the clashes and civilian deaths purely as a humanitarian? Are Celik’s remarks protected under the scope of freedom of thought and expression? Was Beyaz’s encouragement of the applause justified as a moral reaction?

The controversy grew so vitriolic that the channel airing the show issued a statement of apology. Then Beyaz himself went live on TV to express his regret over the controversy.

“I’m very upset and perplexed,” he said. “How could I be suspected of [spreading propaganda]? … I do apologize. Please don’t make me an issue of politics.” Stressing that he is the son of a police officer, Beyaz tried to explain his encouragement of the applause as momentary absent-mindedness.

While his backpedaling pleased government supporters and nationalists, Beyaz then came under fire from the opposite camp, which accused him of “failing to defend his intellectual honor,” “surrendering to money” and “abasing himself by apologizing.”

The controversy has received extensive media coverage, generating about 40 columns from Jan. 9 to Jan. 12. The tone of pro-government and nationalist media outlets has been one of a witch hunt, with the former insisting that Beyaz "must pay a price."

As a result of this climate in the press, an incident that might have otherwise remained a relatively minor pop-culture phenomenon grew out of proportion, leading prosecutors to investigate accusations that Beyaz spread terrorist propaganda.

Celik, for her part, was charged with “praising terrorism and a terrorist organization." Muharrem Erbey, the lawyer of the 26-year-old art teacher, said, “My client is a newlywed teacher who is expecting a baby. She and her husband reached out to me for legal support. They are very much terrified. We’ll go to the prosecutor to testify after we have some consultations.”

Both Celik and Beyaz seem headed for hard times, with their careers at stake. What should we make of such an unlikely problem befalling a showbiz figure? Is it an eclipse of reason in Turkey or the reflection of firm public support against terrorism?

The answer is directly related to perhaps the most critical principle of the fight against terrorism — that a thick line should be drawn between civilians and those who brandish arms.

Unfortunately, the Justice and Development Party’s return to power as a one-party government in the Nov. 1 elections has failed to stop the clashes raging in urban areas since July.

The Beyaz incident shows that in Turkey, any issue, actor or development has come to be judged along the lines of support or opposition to the government. The concepts of terrorism and terrorist propaganda are also increasingly used to delineate support/opposition to the government — so much so that even Beyaz, one of the most popular celebrities in Turkey, was unable to escape them.

This toxic climate is just the opposite of what Turkey actually needs, namely social reconciliation and internal peace. A stark reminder of how delicate Turkey’s situation is came Jan. 12, when a suicide bomber identified as an Islamic State militant blew himself up at Sultanahmet Square, the touristic heart of Istanbul. Both the bomber and his victims were foreign nationals, signs that the Syrian civil war is spilling over into Turkey.

But sadly, social polarization in the country fueled by domestic politics and other factors has reached a worrisome level, as evidenced by the diametrically opposed reactions to the Beyaz incident. In this atmosphere, Turkish society is becoming incapable of consensus even on such a vital issue as terrorism. And the more the polarization deepens, the more Turkish society becomes the loser as a whole.

On the issue of terrorism, Turkish society is increasingly losing its touch with reality and missing an important point: Accusing a pop-culture icon of spreading terrorist propaganda turns the issue of terrorism into a pop-culture item, trivializing this vital debate. Those who distort the terrorism issue and use it recklessly must know they could be ruining their own country’s cohesion and internal peace.