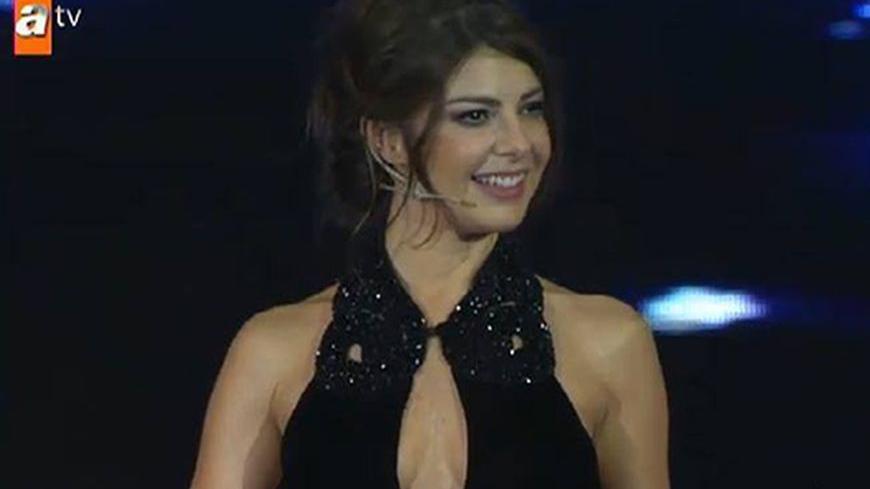 Gozde Kansu in her now infamous outfit on quiz program, "Heir to the Throne," Oct. 6, 2013. - Facebook/GozdeKANSU

Connie Brockway, the award-winning US author of romance novels, believes that the lower a woman’s décolletage is, the less need there is for conversation. That may be the case in her country but it certainly does not apply in Turkey, where the issue of women's cleavage is currently at the heart of a heated social debate.

The extreme sensitivity of Turkish women who consider themselves secular and modern toward the Justice and Development Party (AKP) in power, especially when it comes to issues involving their bodies, was revealed again when a deputy leader of the party recently criticized the way some women dress.

Huseyin Celik, a former minister for education who is currently the government spokesman, came out during a talk show on Beyaz TV, a pro-government channel owned by the son of the AKP mayor of Ankara, against revealing dresses displayed on television.

Ironically, he was touting the merits of the government’s latest “democratization package,” which appears to have pleased no one except Islamists. He was trying to convince the public that with this package, the lifting of the Islamic headscarf ban for women who want to work in the public sector was a step toward more democracy in Turkey.

Celik also tried to assure the public that his party, generally considered to be Islamist, was determined not to interfere with the way people dress. However, remarks he went on to utter suggested to staunch supporters of the secular republic that things are not as rosy as he was trying to make them appear.

Referring to the female presenter on a popular entertainment program on one of Turkey’s main TV channels, without naming either the channel or the presenter, Celik said the dress the young woman was wearing was unacceptable.

“We don’t interfere in the way anyone dresses, but can you wear an extreme outfit that is almost an evening dress and be a presenter?” he asked, claiming that such a thing would be unacceptable anywhere in the world, even in Hollywood.

It was generally accepted that he was referring to Gozde Kansu, the young and attractive presenter of the quiz program on the ATV channel called “Heir to the Throne.” Her “offending dress,” which seems to have ruffled Celik’s sense of Islamic morality, was clearly designed to reveal some cleavage, although it can hardly be called “extreme.” Neither is the manner in which Kansu dressed a rarity for Turkish television.

Reactions from women who consider the AKP to be a party that is trying to whittle away at the rights women have gained under Turkey’s secular republic came almost immediately. As matters stand, secular women in Turkey are already on high alert against interference in their lifestyles by the government, given the constant exhortations by Prime Minister Recep Tayyip Erdogan to women to have at least three children and stay away from caesarean sections and abortions.

A suggestion not so long ago on television by a little-known Islamic theologian that it was unseemly for pregnant women to be seen in the streets had also resulted in demonstrations by angry women, who say Islamists bent on meddling in peoples lifestyles are being constantly emboldened by the steps being taken by the Erdogan government in the name of democracy.

The debate involving Kansu’s dress went ballistic when ATV, which is owned by a group that promotes the government’s line, fired Kansu following Celik’s remarks. Celik is still trying to defend himself by arguing that he had not named anyone or asked for anyone to be fired.

ATV executives, on the other hand, are saying they fired the attractive presenter because of her bad performance, rather than any cue they received from the government. But as Tulin Daloglu rightly points out in her Oct. 10 piece for Al-Monitor, the pre-recorded show she appeared on would not have been aired if ATV felt her performance was not in line with their expectations.

The bottom line is that Celik is being accused over Kansu’s dismissal, and the issue has turned into a “cause célèbre” for anti-government secularists. The incident is also being taken in anti-AKP circles as a clear example of how even the light entertainment media in Turkey, let alone the news media, is at the government’s beck and call nowadays.

Meanwhile, the incident provided fresh fodder to the opposition in parliament and has further fueled the increasing political polarization in Turkey due to the AKP’s policies.

Even the Nationalist Movement Party (MHP), which has supported the government’s efforts to lift the headscarf ban on women, tried to make political capital out of this controversy. “My suggestion is that a channel should be established whereby people can send a photograph of what they propose to wear to Huseyin Celik for approval,” Oktay Vural, a ranking member of the MHP, said mockingly during a news conference in parliament.

But the angriest reactions to Celik came from women. Mutlu Tonbekici, a popular columnist for daily Vatan wrote that Turkey has become a country where a television presenter, on a private channel and not one owned by the state, could be fired because a deputy prime minister does not like the way she dresses.

Nurgul Yesilcay, a famous actress with a taste for revealing outfits, for her part expressed her indignation on Twitter. “As if the country has no other problem, adult men are sitting and concerning themselves with who is wearing what, and some are seen to take this seriously,” she tweeted.

Daily Milliyet columnist Olcay Gulgun Karaoglu, on the other hand, had no doubt that ATV fired Kansu because of Celik. She argued that the channel would otherwise have waited a while before getting rid of her because of her screen performance, not to appear to be acting on the instructions of a member of the government.

“This incident is a fantastic example showing the government’s aims and intent. At the same time, it shows how far bureaucracy is prepared to go to serve this purpose and how it is taken seriously,” Karaoglu wrote.

There were also males in the mainstream media who weighed in to support Kansu. “What’s it to you who wears what?” Ahmet Hakan, a widely read columnist for the daily Hurriyet, asked Celik in his column. He added, “If you don’t like it, turn your head the other way. Who gave you the right to determine what is too open or too closed in dressing?” He also said that Celik, as a politician, should concern himself with issues that matter for the country, instead of worrying about the way people dress.

Meanwhile, commentary in the Islamist media on Celik’s response to Kansu’s décolletage was scant. The most likely reason is that having gained an advantage with the lifting of the headscarf’s ban in the name of “democracy” and “respect for everyone’s right to dress freely” it would appear contradictory to blame someone for the way she dressed.

There can be no doubt, however, that the AKP’s Islamist supporters, who are the only tangible beneficiaries of the Erdogan government’s “democratization package,” agreed with Celik, and would under normal circumstances have spared no words for those supporting Kansu’s choice of dress. It is clear that political expediency, rather than political correctness, is what is keeping them quiet.

The whole episode nevertheless goes to show how the struggle between secularists and Islamists is progressing in Turkey, where selective steps are taken in the name of democracy which may serve the interests of some, but seem to have little respect for the rights of others.