Diyarbakir's Amedspor soccer club is paying a heavy price for making its way to the Turkish Cup quarterfinals, defeating powerful rivals along the way. 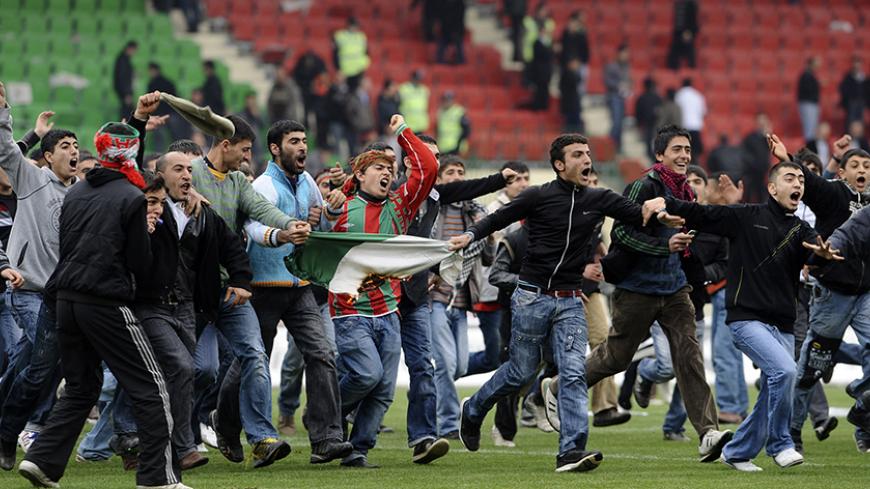 Diyarbakirspor fans shout slogans on the pitch as they hold a burning Bursaspor team flag during a Turkish Super League soccer match between Diyarbakirspor and Bursaspor in Diyarbakir, March 6, 2010. - REUTERS/Cem Ozdel

Diyarbakir, the largest city in Turkey’s predominantly Kurdish southeast, is often called Amed by Kurdish movement followers. The name derives from the Median Empire, which ruled the region in 6 B.C. and whose inhabitants the Kurds view as their ancestors. Until four or five years ago, referring to Diyarbakir as Amed was considered an expression of Kurdish separatism and could land one in court. Later, however, the name began to gain acceptance after the political process with the stated aim of a peaceful resolution to the Kurdish conflict got underway. The atmosphere relaxed so much that in October 2014, Diyarbakir’s soccer club — the Diyarbakir Metropolitan Municipality Sports Club, a second division outfit wearing the colors green, red and white — renamed itself Amed, and the Turkish Football Federation approved the change.

For nationalist Turks, the name Amed continued to have separatist connotations. Yet a state of nonconflict — i.e., the “settlement process” — had begun between Ankara and the Kurdistan Workers Party (PKK), and its dynamics spawned tolerance toward expressions of Kurdish identity, including Kurdish names, which made the soccer name change possible.

The soccer club — referred to colloquially as Amedspor by fans and the media — had been established in 1972 in Diyarbakir under a different name and for a long time played in the amateur leagues. In 1990, the Diyarbakir municipality purchased the team, and the club assumed its name. In every local election since 1999, Kurdish parties have won control of the city’s municipal administration. Hence, Amedspor is a soccer club with a distinct Kurdish identity in terms of fans, ownership and name.

In July, however, the settlement process that had made it possible for Amedspor to assume its name gave way to a bloody war, which, unlike previous phases of the Kurdish conflict, has raged in residential areas of cities and towns. The worst clashes have unfolded in Cizre, Sirnak and Silopi as well as in Sur, the walled old city of Diyarbakir, now the theater of devastating urban warfare with scores of civilian casualties.

Thus, these days, Amedspor’s soccer players prepare for and play their matches to the sound of explosions and artillery echoing from Sur, which government forces are yet to purge of PKK militants holding out behind barricades and trenches for weeks. Scenes of destruction little different from those in Syria can be seen in some neighborhoods after tanks and armored combat vehicles moved in to crush the armed resistance.

Given the situation, Amedspor fans — as residents of a city where government forces commit grave human rights violations and the people are collectively punished — have come to carry their anger to the stadium. In this toxic atmosphere of war and deepening polarization, Amedspor did what no Kurdish soccer team was supposed to do: In a surprising development on a national scale, it reached the Turkish Cup quarterfinals, beating powerful rivals along the way. The club, however, was not to get away with such an achievement.

The first hurdle popped up Feb. 2, when the Turkish Football Federation slapped heavy sanctions on the club for incidents during its Jan. 28 game against Istanbul’s Basaksehir in the group stage of the Turkish Cup. The federation’s disciplinary board ruled that Amedspor’s fans had chanted ideological slogans and banned them from attending their club’s next game, in addition to fining the club 25,000 Turkish lira ($8,500).

The Basaksehir-Amedspor game, which ended in a 2-2 draw, represented a striking reflection of Turkey’s polarization on the soccer pitch. Basaksehir’s Semih Senturk, who saved his side from defeat in extra time, taunted the Amedspor fans with a military salute after scoring the equalizer. The gesture appeared to mean that he saw the goal as a “combat action.”

More bad news followed for Amedspor late Feb. 2 when the police raided the club’s facilities in Diyarbakir and confiscated computers. Club President Ali Karakas said the 40-odd policemen were trying to establish whether certain messages on Twitter had been posted from the club’s computers.

In a further blow two days later, Amedspor’s able striker Deniz Naki received a 12-match ban for making “statements incompatible with sportsmanship” and spreading “ideological propaganda” on social media. The penalty was imposed for Naki’s posts after Amedspor’s 2-1 away-match victory Jan. 31 against Bursaspor, in which he scored the winning goal and took his club to the Turkish Cup quarterfinals. “Amedspor did not and will not bow down. … We dedicate this victory to all who lost their lives or were left wounded in the atrocities going on for more than 50 days in our lands,” Naki wrote, before adding in Kurdish, “Long live freedom.”

The scale of the country’s polarization was also reflected in the language used by the commentator of the match, broadcast live on a pro-government television channel. The commentator refused to say Amedspor’s name, instead referring to the team as “they.”

Amid all the controversy, Amedspor's Karakas was, unsurprisingly, perplexed. In remarks to the press, he said, “I still don’t know whether we did an amazing job or something wrong. There is our sporting achievement on one side and on the other we face a character assassination campaign by those who cannot swallow it.” Karakas stressed that the racist abuse directed at the team during away matches was eroding their bond and sense of belonging to the country. The fines slapped on the already struggling club exceeded 230,000 Turkish lira ($78,000), he said.

As elsewhere in the world, in Turkey soccer is not simply soccer. It is also politics. Rather than striving to settle ethnic, social, political and cultural conflicts that have now spilled over into stadiums, the Turkish political establishment is causing them to further deepen with its authoritarian tilt. In a country like that, whatever Amedspor wins in the sports arena is doomed to be lost on the political playing field.