The match was set in Diyarbakir by President Recep Tayyip Erdogan as he faces a tough vote next year. 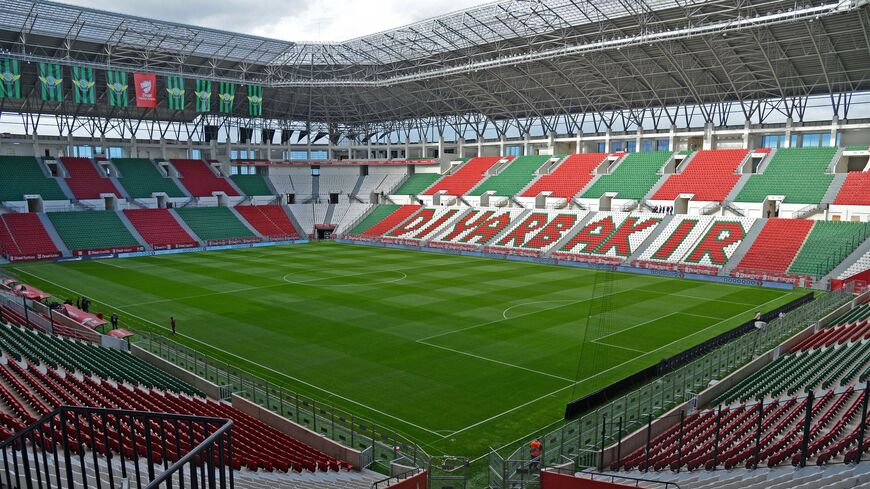 This photograph taken on May 9, 2018, shows a general view of the new built stadium in Diyarbakir, Turkey. - ILYAS AKENGIN/AFP via Getty Images

ISTANBUL — Turkey’s national anthem rang out around a packed stadium on Wednesday evening as the Turkish men’s soccer team lined up for the first national match ever played in Diyarbakir, widely regarded as the unofficial “capital” of the country’s Kurdish region.

With a crowd of some 33,000 flag-waving supporters singing "Istiklal Marsi," the players stood under the lights of the Diyarbakir Stadium for a friendly game against Scotland.

The game, which was played in the city on the instructions of President Recep Tayyip Erdogan, came as Turkey faces elections next year in which the country’s Kurdish voters are expected to play a key role.

Erdogan is facing probably his toughest electoral challenge ever amid the worst economic crisis under his 20-year stewardship that has left the president and the ruling Justice and Development Party (AKP) struggling in the polls.

Some observers have noted a softening of the government’s stance toward the People's Democratic Party (HDP), which is widely supported throughout Turkey’s southeast but is portrayed by the government and its allies as being closely linked to the Kurdistan Workers Party (PKK).

The PKK, which has waged a 38-year insurgency that has led to tens of thousands of deaths, is listed as a terrorist organization by Turkey, the United States and the European Union. The HDP, meanwhile, faces a legal case that could lead to its closure and political bans on hundreds of its leading members.

Despite this antipathy, an AKP delegation led by the justice minister met HDP officials last week in a surprise move to garner support for a parliamentary vote on constitutional changes.

Last weekend Selahattin Demirtas, the former HDP co-chair who has spent six years behind bars, was granted leave to visit his father in Diyarbakir, where he is recovering from a heart attack.

Aysel Tugluk, a former HDP lawmaker who was jailed in 2016, was freed from prison late last month after an 18-month campaign for her release on the grounds of her dementia diagnosis.

“The governing party, the AKP, just before elections wants to have peace with the Kurdish community, you don’t need to be a political analyst to see this,” said sports writer Mert Aydin. “In the last couple of weeks there was the visit from AKP officials to HDP’s group. Overall holding the match in Diyarbakir is a good thing, whatever the reason is.”

Basking in the success of the game, which Turkey won 2-1, Turkish Football Federation President Mehmet Buyukeksi noted Erdogan’s role in setting the match in Diyarbakir.

“The most important aspect of the match for us was that the A National Team played in Diyarbakir for the first time in the history of the republic,” he said in post-match comments on Thursday. “On the request of our president to play a national match in Diyarbakir, we hosted Scotland at the Diyarbakir Stadium."

He went on, “Both in the city and in the stadium there was a very nice ambiance. Our national team and the people of Diyarbakir were united. They filled the stadium and cheered. The city, the stadium, the fans, the result, everything was good. Having such a match in Diyarbakır made us very happy both as a federation and all our citizens.”

The city is home to two soccer clubs that share the Diyarbakir Stadium — Diyarbakirspor and Amedspor. The latter plays in the third tier of Turkey’s soccer league and takes its name from the city’s Kurdish moniker.

This association with the Kurdish identity has coincided with bans on the club’s supporters attending away games. When they do travel to matches, Amedspor fans are frequently subject to racist abuse and violence.

Games in Diyarbakir are also prone to displays of Kurdish nationalism, such as the waving of the Kurdistan flag of northern Iraq.

During a September match in Diyarbakir against Bursaspor, a club from northwest Turkey with fans that have a reputation for staunch Turkish nationalism, the Bursaspor players were escorted by armored vehicles to and from the stadium while items were hurled onto the pitch, including a knife thrown in the direction of the visiting goalkeeper.

“It’s a very good thing to have the game in Diyarbakir if you want real integration,” Aydin said. “It’s a nice thing to integrate them because of the things that happen to Amedspor in the second division — they always have problems with other teams. It’s not a pleasant situation that’s going on at Amedspor games so, when you think about that, it’s a nice gesture.”

There was a suggestion, however, that a significant number of those among the crowd in Diyarbakir were not local supporters.

“They brought a lot of people from outside the province,” one Diyarbakir fan told Al-Monitor. “We tried to get tickets but couldn’t find any. We heard a lot of AKP people got the tickets.”