The soccer team of Turkey’s largest Kurdish-majority city has become the target of nationalist animosity from rival fans as well as the government, which accuses the club of being linked to armed Kurdish militants. 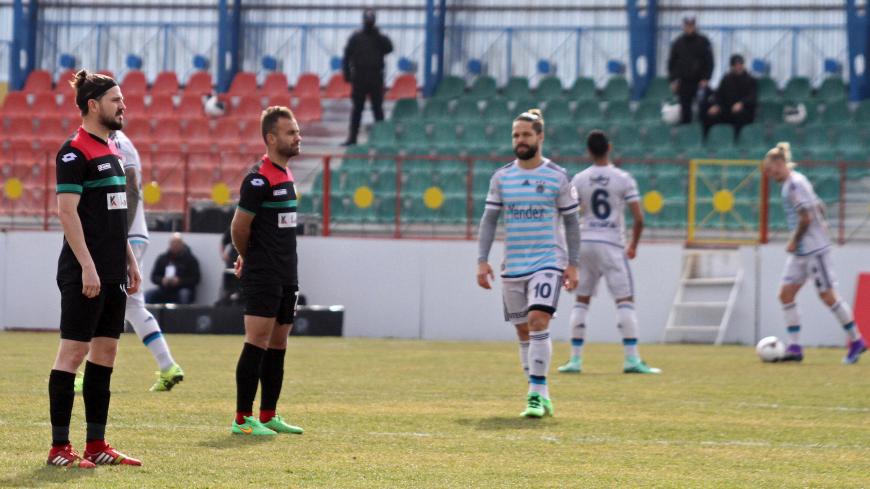 Amedspor players (L) stand still in protest of the Turkish Football Federation after the kickoff of their Turkish Cup soccer match against Fenerbahce in the Kurdish-dominated southeastern city of Diyarbakir, Turkey, Feb. 9, 2016. - REUTERS/Sertac Kayar

DIYARBAKIR, Turkey — A soccer team in Diyarbakir, Turkey’s largest Kurdish-majority city, has found itself accused of links to armed Kurdish militants and suffers routine harassment by rival fans. The team's woes have steadily grown amid Ankara’s crackdown on Kurdish militants and politicians alike and rising nationalist fervor in the country.

The troubles of the 48-year-old club began after it took its current name, Amedspor, in 2015. “Amed” is Diyarbakir’s Kurdish name and although its origins date back millennia in the city's history, it has strong political connotations today. The name is often used by members and sympathizers of the Kurdistan Workers Party (PKK), which has led an armed insurgency in Turkey’s mainly Kurdish southeast since 1984 and is designated as a terrorist group by Ankara and much of the international community. The support that Amedspor received from Diyarbakir’s Kurdish-run local administration reinforced the perceived association between the club and the PKK, with whom Kurdish politicians are also often accused of having links.

Soon after the renaming of the club, peace talks between Ankara and the Kurds collapsed, ending a relatively relaxed period in which the Kurdish minority had enjoyed relative freedom of expression. The security forces launched a ferocious clampdown on urban PKK militants, who dug trenches and erected barricades inside residential neighborhoods across the southeast.

Since then, Amedspor has faced an endless ordeal of unwarranted sanctions, fines and crowd hostility that culminated in an Interior Ministry probe in December.

In April 2016, for example, five of the team's managers were beaten by the managers and fans of the host team, the capital’s Ankaragucu, after Amedspor won a match between them.

Several months earlier, a player for Basaksehir made a military salute after scoring against Amedspor during a match in Istanbul in what was apparently a gesture of support for the ongoing crackdown in the southeast that caused massive destruction in urban areas, including civilian deaths. In the unrest after the game, police detained and handcuffed dozens of Amedspor fans for shouting irreverent slogans at rival fans.

At another game in Istanbul in February 2016, Amedspor players took to the pitch with a banner that read “Don’t let kids die, let them come to the matches” — a reference to the civilian casualties in the clashes. Turkey’s soccer federation fined the club for displaying an unauthorized banner.

In December that year, two Amedspor players were detained over a quarrel with police officers at the stadium after a game between Amedspor and Istanbul giants Fenerbahce.

Although the operations against the PKK’s urban militants were over by 2017, the nationalist fervor against Amedspor continued to simmer. In August 2017, the team’s star midfielder, Deniz Naki, was punched by a rival fan at the end of a game that Amedspor had easily won.

Naki, a German-born Kurd who joined the team while the urban clashes were raging, has often found himself in the eye of the storm. Sporting a large tattoo of the Kurdish word for “freedom” on his arm, he drew nationalist ire for posting politically loaded messages on social media. In a tweet after an Amedspor win in January 2016, he said the team dedicated the victory “to all who lost their lives or were left wounded in the atrocities going on … in our lands” before adding “Long live freedom” in Kurdish. In other posts, Naki denounced the plight of civilians caught in the middle of the fighting. He ended up with a conviction of “spreading terrorist propaganda” and a lifetime ban on playing soccer in Turkey.

Naki was forced to leave Turkey and Amedspor’s troubles continued.

In the past three years, Amedspor fans have been prevented from attending 80 away games on security grounds. The club management sees such decisions as punishment, coming atop a long string of sanctions against the team. In February, for instance, midfielder Mansur Calar received a six-match ban and a fine for improper behavior toward the players and fans of the opposing club. According to Amedspor, no rival fans were present at the stadium in Diyarbakir.

Club president Metin Kilavuz believes the team’s troubles are related to political tensions surrounding the Kurdish question. “We have come under serious pressure since we took the name Amedspor,” he told Al-Monitor. “We see this as a result of the problematic approach to the Kurdish issue and other diversity questions in Turkey. The controversies do not stem from Amedspor and its activities.”

On away matches, he said, rival fans often greet the team with nationalist anthems as if Turkey’s national team were playing against a foreign opponent. “Imagine a team that goes to another city for a game and no hotel accepts it. This has nothing to do with sports. This is directed at the identity of the city that the team represents,” he added.

Kilavuz rejected charges that Amedspor itself was politicizing sports. “Amedspor is the farthest club to politics in Turkey,” he said. “Turkey is going toward a world record [in penalizing] Amedspor. Our fans are banned from away games on security grounds. … Nationalist discourse, slogans, anthems and military salutes — anything incompatible with soccer is being done to us on away matches.”

In November, Interior Minister Suleyman Soylu claimed that the PKK leadership had instructed its cadres to prop up the club financially. The following month, an inspector began investigating the club, sparking speculation that Ankara might oust Amedspor’s management and appoint trustees to run it, very much in the style of its dismissals of elected Kurdish mayors.

According to Kilavuz, such a move would be unlawful. “They sent an inspector after the interior minister’s remarks. A detailed inspection was carried out, but we have yet to receive the final report,” he said, denouncing the probe as discriminatory. “The collapse of the peace process and the ensuing clashes in Diyarbakir heightened the pressure on Amedspor, which is still continuing,” he added.

Kilavuz described Amedspor as the club of “the ostracized” and called for dialogue through sports. “We believe no problem can be resolved through violence,” he said.

Eight of the club’s 18 players are ethnic Kurds. Goalkeeper Serkan Ipek is one of them. He, too, is frustrated by what he describes as “countless racist attitudes and slurs” on away matches. “We, too, are residents of this country. They have to accept that we exist in this region,” Ipek told Al-Monitor, adding, “Hard-liners on both sides are a problem.”

Amedspor has three fan groups, including an all-women one called Purple Barricade. The fans never miss their club’s matches at home, though they have been prevented from supporting their team on away matches for years.

Mahzun Kazikci, a loyal supporter of the team, said he rejects mixing sports with politics. “They are trying to drag us into politics. We are just fans, not representatives of an organization or a party, but they are forcing us to be political,” he told Al-Monitor.

As Kilavuz noted, “Amedspor is about more than sports.” Locals in Diyarbakir widely believe that Ankara’s attitude toward Amedspor mirrors its wider attitude toward the Kurds. The fairness of this assessment may be open to question. However, Amedspor — and soccer diplomacy in a broader sense — could have served as a vessel of moderation in the Kurdish problem. But like other wasted opportunities, this window seems to be closing as well.