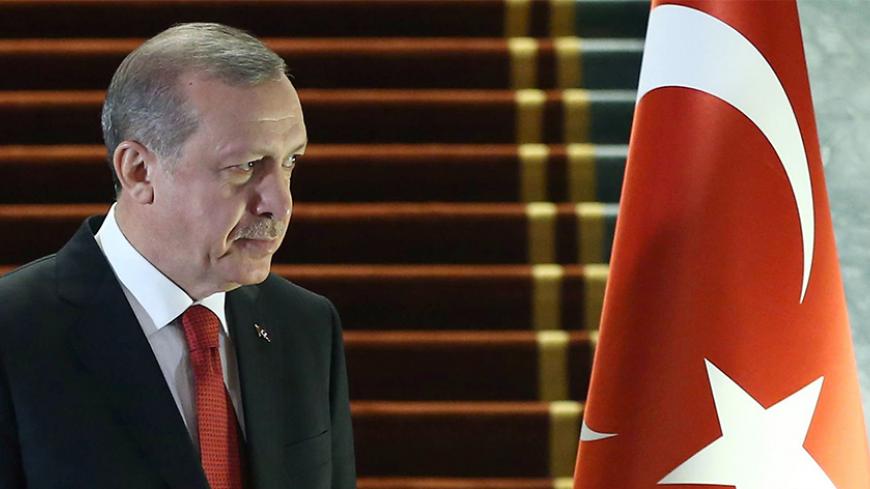 On the very first day of 2016, news agencies reported a bizarre story out of Turkey. At a press conference, President Recep Tayyip Erdogan referred to “Hitler’s Germany” as an example of the political system he proposes for his country — “a presidential system with a unitary state.” This statement was, of course, seized by the press, with worrying headlines such as “Erdogan cites Hitler's Germany as example of effective government.”

A couple of hours later, the president’s office released an official correction. Reminding everyone that Erdogan has condemned the Holocaust and anti-Semitism as “a crime against humanity, just like Islamophobia,” the statement asserted that the president pointed to Hitler’s Germany only as a very bad example of “the presidential system.” The statement blamed the media for the confusion, claiming the “Hitler’s Germany metaphor has been distorted by media outlets and has been used in the opposite sense.”

Listening to the press conference live in Turkish, I thought that perhaps it would be more realistic to accept that Erdogan made a puzzling remark rather than accusing the media of distortion. True, Erdogan did not praise the Third Reich at all, and did not reference it as his model. But he should have calculated that any reference to Hitler’s Germany without a disclaimer would have created such a buzz.

So, this was obviously a blunder on Erdogan’s side. But what kind? Opposition voices in Turkey see it as a Freudian slip, or even a well-calculated tactic to instill the seeds of the tyrannical model he really has in mind. I rather see a reckless reference in an already reckless, uncalculated remark, in which Erdogan made another mistake that many people missed. He said, “We see this [presidential] model in the overwhelming majority of developed countries.” However, as a simple Internet search would show, most developed countries are in fact either constitutional monarchies or parliamentary republics. The presidential system Erdogan promotes can be found in the good example of the United States, but also in many African and Asian dictatorships.

To see why Erdogan is so interested in bringing a presidential system to his nation, changing the century-old parliamentary system Turkey inherited from Europe, one has to look at his political career. Erdogan became the prime minister of Turkey in late 2003, and in the next decade he never advocated a presidential system. The executive power was in the hands of the prime minister, and Erdogan was happy with that.

Yet in late 2012, he apparently felt he needed a change. As prime minister, he had a self-imposed “three-term limit,” which would end in 2014. So, he either would retire or opt for a higher office, which was of course the presidency. But the presidency devised by the Turkish Constitution did not have the executive powers Erdogan wanted. So by 2012, Erdogan’s advisers and media supporters began cooking up the idea that a presidential system was a must for Turkey to become a more “advanced” democracy and a more influential global power.

When Erdogan was elected president in August 2014, his need for the “presidential system” became more urgent. Erdogan kept pushing for a major constitutional change, but his Justice and Development Party (AKP) never had the parliament supermajority to pass it. Hence, in August 2015, when Erdogan declared, “The presidential system is now a de facto reality,” he faced accusations of waging a “coup” against the constitutional order.

Now, Erdogan is emboldened by the AKP's electoral victory in November and is once again pushing for a presidential system. One criticism he faces is that arguably the only country with a really good presidential system, the United States, is a federation of 50 states, not a single, unitary state like Turkey. Political power is quite decentralized in the United States, whereas in Turkey it is very centralized and its combination with an all-powerful president would lead to an “elected dictatorship.”

This was the criticism Erdogan was trying to defuse in his controversial comment about Hitler’s Germany. The reference, obviously, did not help Erdogan calm the fear that he is heading toward an elected dictatorship. But the real problem, in my view, was not that reference, which was corrected by Erdogan’s office. The real problem was in that very correction.

In the statement, it was in fact nice to read, “If the [presidential] system is abused it may lead to bad management resulting in disasters, as in Hitler's Germany.” This was a comforting admission of the fact that elected presidents can abuse a political system. But the remedy offered was not comforting at all, as it merely said, “The important thing is to pursue fair management that serves the nation.”

In other words, an elected president with a highly concentrated power could turn dictatorial, but would not if Erdogan pursues "fair management that serves the nation.” So we should put our trust in the virtues of the leader. And since Erdogan is a very virtuous leader who “serves the nation,” the implicit argument is that we should not be worried about too much political power being concentrated in his hands.

What is painfully lacking here is an acknowledgment that virtue is ultimately relative, and a liberal democracy works not by such subjective definitions, but by systemic bulwarks against authoritarianism — such as separation of powers, an independent judiciary, a free press, decentralization of power and civil society. A political model that disregards all these checks and balances as illegitimate "tutelages" on the "national will," as we have lately heard from Erdogan’s supporters, will be inevitably authoritarian, no matter how much virtue it ascribes to itself.