Rouhani makes up for lost time in Italy

Iranian President Hassan Rouhani is eager to bring his country back to the point it was before the sanctions. 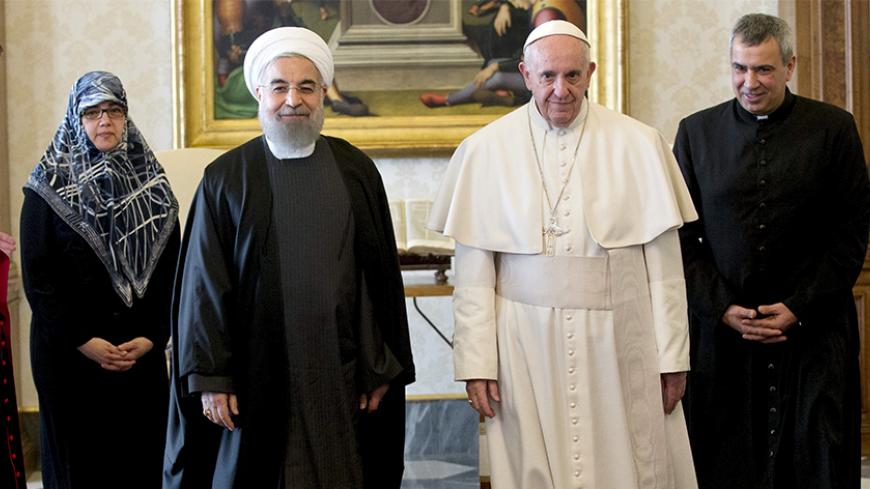 On a trip to Italy and France to boost economic times after the nuclear deal between Iran and the six world powers, Iran’s President Hassan Rouhani met with Pope Francis at the Vatican. The meeting is a sign of improved European-Iranian ties as Rouhani attempts to bring his country out of economic and political isolation. During meetings with Italian officials, Rouhani emphasized his desire to recover from the era of sanctions that damaged his country’s economy and relationship with European countries.

The last time an Iranian president met with the pope was 16 years ago in 1999 when former President Mohammad Khatami met with Pope John Paul II at the Vatican. While Khatami’s “Dialogue of Civilizations” never came to full fruition, Rouhani has picked up the mantle of attempting to reduce tensions with European countries and establishing cooperation with the promise of enduring ties.

Rouhani left Tehran for Europe Jan. 25. He told reporters that his main goal would be to improve ties with countries that Iran had positive ties with before the nuclear sanctions. Iran faced nearly 10 years of increasingly more stringent UN Security Council resolutions, including United States and European Union sanctions over its nuclear program.

Rouhani, who was accompanied by six of his ministers and a number of advisers, said his focus on this trip would be to expand ties in the fields of industry, universities, agriculture, tourism, and medical and environmental equipment. Rouhani’s Vice President Eshag Jahangiri remained behind in Tehran to continue negotiations with the Guardian Council over the disqualification of parliamentary candidates for the February elections.

At a meeting with Italian President Sergio Mattarella, Rouhani said, “The two countries in the previous years, due to unfair and wrong sanctions, were not able to use their mutual opportunities and capacities, but now is the time to make up for that.” Mattarella said, “Various trade and industrial companies are very eager to have a presence and cooperation with Iran.” He added, “With investment and an active presence, we are looking to make up for the opportunities that the sanctions took away from Italy.”

At a press conference with Italian Prime Minister Matteo Renzi, Rouhani again struck the theme of making up for lost time, saying, “Italy at one time was the first trade partner of Iran within the European Union. And we are certain in this new chapter cooperation between the two countries will increase.” The two leaders signed 14 documents of cooperation, including in the fields of transportation, railways, education, security, port cooperation and agriculture.

Iranian Reformist media has been optimistic about Rouhani’s trip, and some encouraged the president to go even farther than Europe to improve the economic conditions of the country.

An article in Ghanoon argued that the quality of technology of the West is better than the East and wrote, “Four industrial countries in Europe are competing with another, and Iran can take advantage of this competition.” However, the article cautioned that Iran “must not ignore the United States” because much of European technology comes from America. The article said that Iran must address its issues with the United States so that economic and energy relations could be established and Iran can balance its relationship with China and Russia, two countries that the author reminded readers voted in support of UN Security Council resolutions against Iran.

Rouhani will next travel to France where he will meet with French President Francois Hollande.