Why Israel needs Turkey now more than ever

Israel and Turkey are strengthening their relations as both keep a wary eye on Iran's outreach to the world and regional countries. 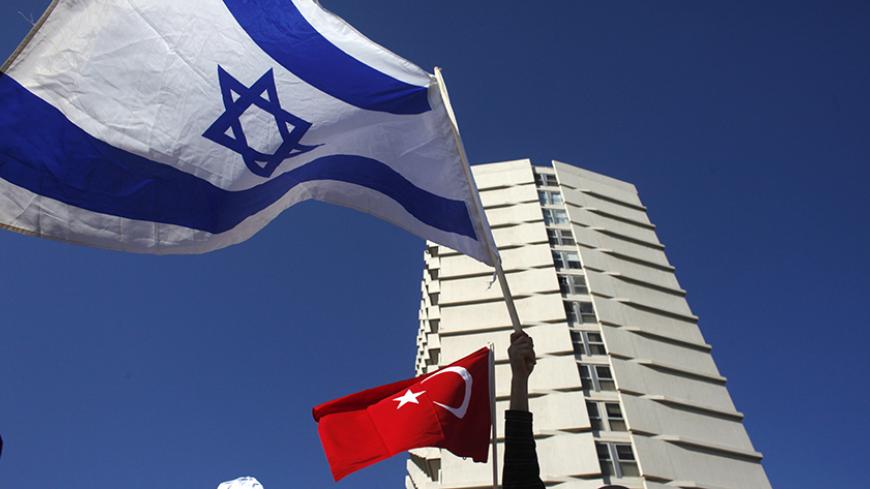 Employees from a Turkish-owned company in Israel protest against the tensions between the two countries outside the Turkish Embassy in Tel Aviv, Dec. 28, 2010. - REUTERS/Nir Elias

Iran’s President Hassan Rouhani is on a historic tour in the European Union this week. Accompanied by an esteemed entourage of about 100 Iranian businessmen, Rouhani was received with honors in Italy. In Rome he met with Prime Minister Matteo Renzi and was received at the Vatican by Pope Francis. From Italy he will continue to France, where he’ll meet with President Francois Hollande at the Elysee Palace. At each of these capitals, Rouhani will seek to fill a large shopping basket he’s brought with him from Tehran, which is now rushing to fulfill the nuclear agreement that went into force Jan. 16, almost two weeks ago.

This market, where Iran has been shopping since international economic sanctions have been lifted, is full of hungry buyers and sellers, equally eager to close multimillion dollar deals.

When Rouhani smiles at his French hosts Jan. 28, Israel’s Prime Minister Benjamin Netanyahu will participate at a summit in Nicosia, the capital of Cyprus, with Greek Prime Minister Alexis Tsipras and Cypriot President Nicos Anastasiades. According to official announcements, the three will discuss a series of weighty topics including the environment, tourism, energy and regional security. But hanging above them all will be Netanyahu’s frustration at his failure to prevent the lifting of sanctions on Iran and his fear that, under the protection of the agreement, Iran will establish itself as a regional power and supporter of terrorism.

A senior Asian diplomat who served in Israel until recently told Al-Monitor on condition of anonymity that the main motivation of the United States and Russia in backing the nuclear agreement with Iran is disappointment in Washington as well as in Moscow with the alliances both have with the Sunni Muslim states. “Shiite terrorists are not attacking Western targets,” he said, trying to explain why the powers have ignored the terror Iran is funding and instigating, as Netanyahu has been constantly warning.

A senior governmental source in Jerusalem who is involved in the issue and very close to Netanyahu told Al-Monitor on condition of anonymity that this logic is exactly what’s currently moving Israel’s prime minister toward Turkey. Their common interests in light of the nuclear agreement with Iran and the West's embracing of it, said the diplomat, has made the normalization of relations with Turkey a “high priority.”

Jerusalem feels threatened by what it calls a “concept switch” that the West and Russia have developed regarding threats in the Middle East. That is, Israel’s allies see the Sunni Islamic State as the central threat, and Shiite Iran, which supports terrorism, as an ally, so they’ve been neglecting cooperation and alliances with the Sunni Muslim states. Iran is a threat, said the source in Jerusalem, emphasizing that Iran in Syria is an existential threat to Israel. The fear in Jerusalem is that Iranian jets would park at military airports, that war ships that arrive from the Persian Gulf would anchor at the ports of Latakia and Tartus, that Iranian anti-aircraft batteries would be spread out throughout Syria, that intelligence and enlistment bases would all become an Iranian front at the northern border of Israel.

The diplomatic source added that Turkey, too, which belongs to the Sunni bloc, doesn’t want to see Iran in Syria, but is following a different strategy. According to him, the high priority of strategic cooperation between Israel and Turkey against the Iranian establishment in Syria is very important. Turkey is a NATO member and has strong ties with the European Union. A link between the two states would work as a much more powerful lever on the United States.

“Turkey must be our ally,” said the government source. He also noted the importance of normalization of relations with Turkey in order to realize and maximize the natural gas reserves waiting in the depths of the Mediterranean Sea on the coast of Israel.

Last week, Netanyahu and Turkish Prime Minister Ahmet Davutoglu both attended the World Economic Forum in Davos, where despite reports of significant advancement in the negotiations between the two countries, they didn’t exchange a single word. The Turkish news agency Anadolu quoted Netanyahu as saying on the sidelines, “We are talking to them and they are talking to us and if we succeed, that will be good for both countries.”

This sentence describes the situation between the countries since the 2010 Mavi Marmara incident, when Israeli soldiers killed 11 Turks in an operation to stop the flotilla to Gaza, after which Turkey downgraded diplomatic relations between the two states. A Turkish diplomat who spoke to Al-Monitor during the conference to gauge the likelihood of a meeting between Netanyahu and Davutoglu expressed misgivings at what he called “Israel’s foot-dragging” and at Netanyahu’s hesitation to sign the reconciliation pact, even though its formulation was agreed on a long time ago. The Israeli governmental source is aware of frustration in Turkey. He estimated that the window of opportunity is closing, but finds it hard to explain Netanyahu’s continuing hesitation on the issue.

At the summit with Anastasiades and Tsipras Jan. 28, Netanyahu will discuss moving gas from Israel’s coast to Greece through Cyprus, the island divided between the EU in the south and the Turkish Republic of Northern Cyprus, which only Turkey recognizes. The cost of this pipeline is estimated at $15 billion. On the other hand, the cost of a pipeline to Turkey would be only $2 billion, which can certainly be another incentive for Israel to end the diplomatic crisis with Ankara. But Netanyahu also knows that now that the nuclear agreement with Iran has gone into effect, the importance of normalizing relations with Turkey goes far beyond natural gas.