In light of the talk about President Mahmoud Abbas’ succession, Palestinian security chief Maj. Gen. Majid Faraj was harshly criticized for his statement to a Western site about his agency’s efforts in preventing 200 attacks against Israelis. 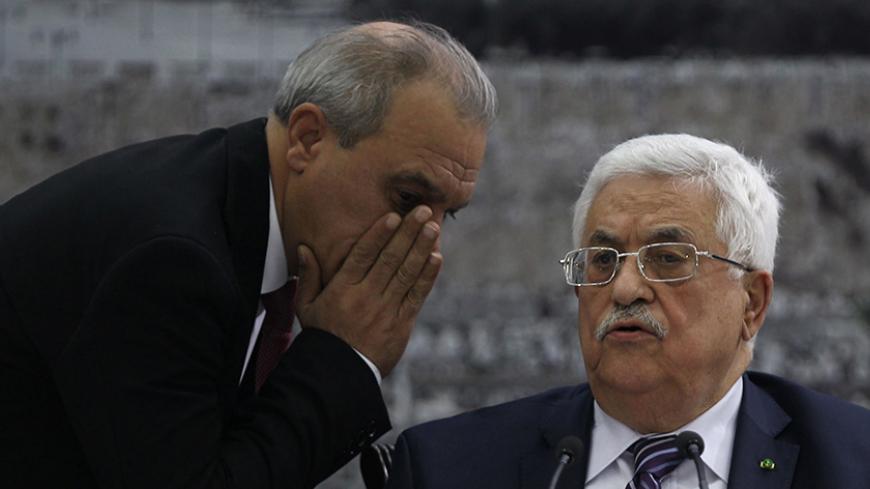 Faraj rarely talks to the media, but in one of his first interviews, which was part of an article published Jan. 18 by the New York-based Defense News website, he seems to have gotten in big trouble with his own people. The attacks against Faraj, who was born in Dheisheh refugee camp near Bethlehem, focus on what people see as his justification of the Palestinian security coordination with Israel.

The article titled “Keeping ISIS out of Palestine” talks about two possible contenders to take Abbas’ leadership position: Faraj, and chief Palestinian negotiator Saeb Erekat. In the 3,000-word piece, author Barbara Opall-Rome veers away from the danger of radicalism in Palestine and deals with Palestinian-Israeli relations. She writes about Faraj, “He insists that since October, PA intelligence and security forces have prevented 200 attacks against Israelis, confiscated weapons and arrested about 100 Palestinians — claims that were not rejected out of hand, but could not be confirmed by the Israeli military.”

The claims about preventing nearly 200 attacks by Palestinian youth against Israelis caught many off-guard and drew strong and harsh criticism from Palestinians of all walks of life. Hamas and Islamic Jihad were especially harsh in their criticism; they issued harsh joint statements condemning the Palestinian security chief.

One Hamas legislator, Yeihiya Abadaseh, on Jan. 22 called on he Palestinian military tribunal to initiate proceedings against Faraj for “grand treason.”

Faraj’s problems were not limited to those opposed to the Ramallah-based Palestinian Authority (PA); some of the criticism came from within the mainstream Fatah leadership.

Maj. Gen. Tawfiq Tiwari, the former head of the Palestinian intelligence, told Al-Monitor that the head of the intelligence service should have stayed quiet. Tirawi conceded that he, too, is against having Palestinian children be sacrificed and killed by what he called “Israeli summary executions.”

He said, “But we are with the resistance to the occupation and in fact not all those stopped by the Palestinian security were children.” Tirawi was referring to the harsh Israeli response to all acts against Israelis that have often led to the death of the Palestinian attackers.

A more nuanced attack came from Ahmed Yousef, former political adviser to former Hamas Prime Minister in Gaza Ismail Haniyeh. Yousef appears to understand the motive behind the statement although he opposes it being made public.

“The aim [of Faraj] was to explain to the West and the United States that the PA is fully carrying out its security duties in accordance with the Oslo Accord, but that the Israelis are not [abiding by it],” he said in a statement Jan. 25.

Yousef concludes that Faraj should have made that statement in private. But now that his statement has been made public and has provoked an angry public response, Yousef asserts, “Faraj needs to apologize to the Palestinian people or resign.”

Faraj, however, was not without defenders. President Abbas quickly came to the rescue of his chief of intelligence. In a meeting with a selected group of Palestinian journalists Jan. 25 at his Ramallah headquarters, Abbas expressed full support for Faraj and insisted that the Palestinian leadership supports popular resistance, “but we will not be drawn into a battle we don’t want.”

Support for the embattled Palestinian security chief also came from within the Dheisheh refugee camp. A statement by the Fatah movement in Dheisheh issued Jan. 23 reiterated the security leader’s national credential that he “was a stubborn opponent to the occupation during his years in jail and in his constant battles with the occupiers.”

It is worth nothing that Faraj had spent six years, on and off, in Israeli prisons before the Oslo Accord was reached.

The Palestinian security official also drew support from an unusual source. On Jan. 24, the Medical Association of Jerusalem — which is the official syndicate of Palestinian doctors — praised Faraj calling for the need to “protect our children and youth.”

Nitham Najeeb, the head of the association, said that Faraj has protected the lives of 200 children, and thus prevented “200 mothers from seeing their loved ones dead.”

The statement of the Palestinian security chief, made primarily to the Western security website Defense News, cannot be divorced from the ongoing discussion about the leadership succession in Palestine. If the head of the Palestinian intelligence is interested in the senior Palestinian position, his abrupt entry to politics has caused him to burn his fingers and certainly hurt his own political ambitions. While the lessons learned from this experience might help him sharpen his public pronouncements, he is unlikely to get much help from colleagues within the Fatah movement, many of whom are hoping to get that top position themselves. Faraj is hopefully not apathetic to local public opinion, thinking that his political future is only in the hands of Israel and the West.

However, Faraj made the statements solely as part of his job and to protect his superior. While letting the Israelis and the rest of the world know where the Palestinian security services stand, these statements will quickly be forgotten as the battle of succession will continue.

The choice is Faraj’s; if he does have political ambitions, he needs to quickly remedy the dent he has caused to his own image and has to work much more carefully on his personal profile and public pronouncements. Otherwise, he should just wait for the storm to settle.