Following years of interruption due to Israel's blockade on the Gaza Strip, the scrap trade there has resumed, sparking economic hope. 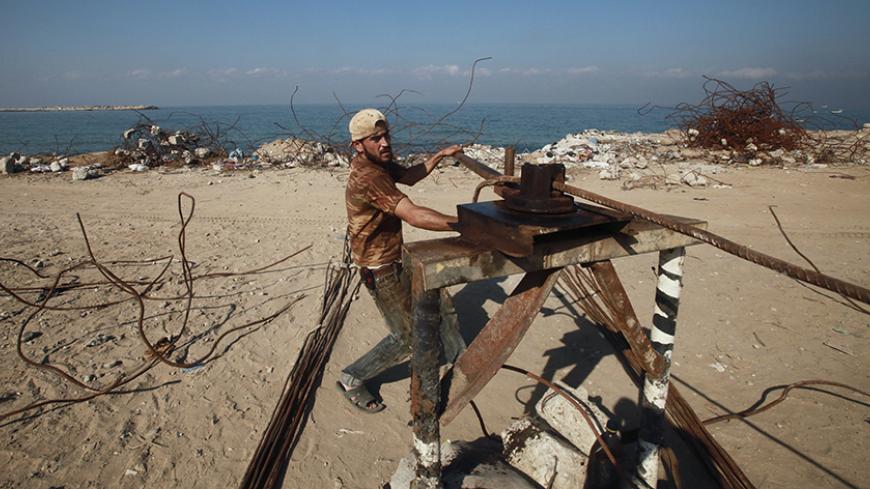 A Palestinian worker straightens scrap metal collected from the rubble of a destroyed hotel in Gaza City, Nov. 7, 2010. Thousands of Gazans, mainly young men and boys, make their living close to the no-go border zone in Gaza by picking over the wreckage of factories and houses destroyed in the past few years of conflict between Hamas and Israel. - REUTERS/Suhaib Salem

RAFAH, Gaza Strip — After seeing their profession almost disappear, scrap collectors once again are roaming the cities and camps of the Gaza Strip in their carts and tuk-tuks (moterized rickshaws). The work isn't easy and has its hazards, but the workers are glad to be back in business.

The collectors buy discarded metal products such as refrigerators, washing machines and electrical cables. The products are stored, sorted, cleaned and then exported to smelting factories in Israel for recycling.

Israel halted the scrap metal business when it imposed a blockade on the Gaza Strip in 2007. As a result, thousands of tons of stamped scrap metal that were ready for export piled up.

“Arab and international parties have, for a while, been making efforts to export these huge quantities from the Gaza Strip," Samir Moussa, a senior member at the Consortium of Independent Palestinians, said in June.

But a few months ago, Israel began allowing scrap metal exports again — some 80,000 tons, according to Moussa.

“Allowing the exportation of nearly 60,000 tons of scrap metal and 20,000 tons of scrap copper from Gaza is a positive step to promote the collapsed national economy and reinvest the workforce specialized in collecting and sorting,” he said.

According to WAFA, the Palestinian news agency, the scrap business in Palestine dates back to the 1990s. It became more popular and widespread during the Al-Aqsa intifada from 2000-2005. The surge was fueled by rising unemployment rates and restrictions on the labor market.

Meanwhile, information from the Palestinian Central Bureau of Statistics reveals the importance of the scrap trade to all Palestinians. Even without Gaza, scrap metal placed second among Palestinian exports in 2011, accounting for 18%. Construction blocks were the top export.

The Gaza Strip had been excluded from exporting any quantity of scrap metal from 2007 until the end of October 2015, when Israel allowed Gazans to export scrap to Israel again. The Gisha Legal Center for Freedom of Movement reported in “The Gaza Cheat Sheet" that 26 trucks loaded with scrap "were seen headed to Israel from Gaza” between the end of October and the end of November.

The decision to allow scrap exports coincided with talks about a reconciliation agreement between Israel and Turkey. The latter demanded that Israel loosen the siege on Gaza before Turkey would normalize relations with Israel.

As a result of the blockade that began in 2007, 95% of factories and workshops in Gaza closed. Tens of thousands of people lost their jobs, bringing unemployment to 40% as of September 2012. According to World Bank statistics reported by WAFA, Gaza unemployment in May 2015 was 43.9%.

Fareed Hamadeh, owner of a stamping workshop that exports scrap to Israel, told Al-Monitor, "I suffered a lot financially after my business stopped in 2007. I am still waiting for my turn since, up to this moment, I wasn’t able to export anything.”

The scrap trade in Gaza is not organized or regulated. Workers in this field estimate that dozens of tons of scrap are collected every day in the Gaza Strip's different governorates. The scrap is stored in warehouses in the middle of residential neighborhoods in the cities of Gaza, which threatens public health when the scrap is burned to extract its metal. The resulting pollution affects the air, water and soil. The business is also tainted by the common use of child labor.

At the same time, the business is a vital source of income for hundreds of families whose members collect scrap, transport it or prepare it at stamping workshops before it is exported. Mohammad Mahmoud, a scrap collector in Rafah, told Al-Monitor, “After years of interruption, I am back again every morning in the streets and camps of the city, on my tuk-tuk, buying scrap from the people and then storing it in a small warehouse near my house. After that, my father, brother and I start sorting the scrap to take it later to stamping workshops and scrap exporters in the Gaza Strip. Finally, it is exported to Israel for re-smelting.”

He added, “The market is alive again now that Israel allows exports. Also, the owners of stamping machines and exporters re-established communication with us to supply them with the scrap we collect.” The scrap business represents the main source of income for Mahmoud — a father of three — and his family.