How Gaza’s plastic factories are betting on recycling

Plastic factories in the Gaza Strip seek to develop the local production of products through recycling, and break the reliance on imported goods. 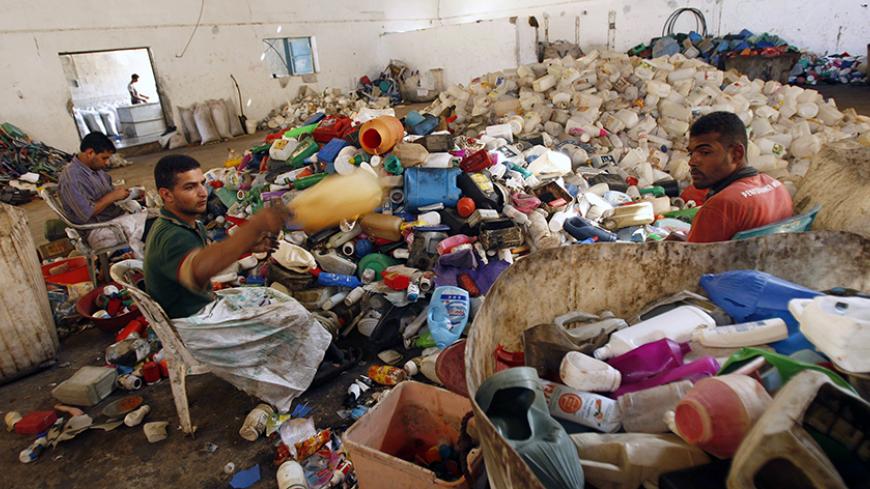 GAZA CITY, Gaza Strip — The Ramlawi Plastic Factory, located east of Gaza City, is making strides in the local plastics industry by recycling plastic and scrap for use in its products. This comes at a time when Gaza's plastics factories face numerous obstacles due to Israel’s ban on the entry of raw materials for plastics industries.

“There is a growing trend in our factory and other factories to use plastic waste in the industry in light of the Israeli ban on raw materials into Gaza,” said Khalil Ramlawi, the director of the factory's marketing and quality department.

Garbage containers and bins are seen as the best places to find plastic waste to be recycled in Gaza's factories, including at the Ramlawi factory, which was established in 1986. More young Palestinians have started to gather and then sell plastic materials to factories as a source of livelihood.

The Gaza Strip produces about 1,900 tons of solid waste per day, 65% of which is organic waste, and the remaining 35% comprising plastic, paper and glass, according to a press statement from Gaza's Environmental Quality Authority.

Amin Abu Sabih, 28, collects empty plastic bottles in the early morning hours from bins in Gaza and then sells them to factories.

“Collecting plastic waste is a source of income for me and my family of four," he told Al-Monitor. "I sell 1 kilogram [2.2 pounds] of plastic for 2 shekels [$0.50]. I collect about 20 kilograms every day.”

Collecting plastic waste is a source of livelihood for him and many others in light of rampant unemployment in the Gaza Strip. Furthermore, the collecting of plastic has helped reduce the instances of burning plastic as a form of waste disposal, thus mitigating the environmental damage caused by the practice.

Palestine's unemployment rate stands at 26%, with the West Bank rate at 18% and the Gaza Strip at 41.2%, according to July 2016 figures from the Palestinian Central Bureau of Statistics.

Ramlawi said that plastic waste must first go through a long process at the factory before being reproduced into new plastic products.

“In our factory, we start with sorting plastic scrap to extract what can be recycled," he said. "The sorted products go through a preliminary grinding process and are reduced into small pieces the size of the palm of the hand. Then there is the washing phase with chemicals to rid the plastic of any defects. [The plastics are later] washed with water to clean them of chemicals. Later, the plastic scrap is melted inside a furnace at a temperature of 250 degrees Celsius [482 degrees Fahrenheit]. Finally, the plastic is turned into small beads to be used as raw materials.”

Ramlawi's factory employs 55 workers and buys nearly 2 tons of plastic waste from collectors per day. Ramlawi said that all products manufactured from locally recycled plastic waste are not consumable goods but instead include trash bags, agricultural irrigation hoses and greenhouse bags.

He pointed out that all the machines used in these operations are locally manufactured by engineers and are subject to dozens of experiments, since spare maintenance parts are not available for defective imported machines.

Recycled plastic waste now makes up about 50% of his factory’s products. Ramlawi has found that locally manufactured plastic products are relatively cheaper than imported ones, thus prompting citizens to buy local, a boon for Gaza's deteriorating economy.

Nevertheless, Ramlawi still faces hurdles and obstacles in developing the local recycling industry. The industry lacks support from the Palestinian government as well as from the European Union, which usually funds development projects in the Gaza Strip. Ramlawi further complained that the power outage crisis continuously disrupts work at the factory.

Sami al-Nafar, the president of the Palestine Federation of Industries, said that 70 factories in the Gaza Strip specialize in plastic. These factories, he said, seek to increase reliance on recycled plastic waste to manufacture less expensive products.

He explained that there is a rising interest among local factories to increase the proportion of locally manufactured products.

"Since August, the supply of raw materials into Gaza has been banned," he said. "Although there is no declared Israeli decision in this respect, not all raw materials are allowed to enter Gaza. We have made several appeals to Israel to allow the entry of raw materials, but so far there has been no response.”

Ramlawi called on local and international official bodies to provide the needed technical and financial aid to factories to support their recycling efforts and to help them overcome the Israeli blockade and produce plastic products of a higher quality.

Despite the efforts by factory owners to use Gaza's recycled plastic in their products, the reproduced products are still of poor quality compared to imported plastic goods. As a result of the blockade, factory owners are unable to import new technologies to improve their rudimentary equipment and materials.