The gold industry in Gaza has thrived amid the outbreak of the coronavirus pandemic in terms of increased production locally and enhanced quality and availability of a variety of gold products and jewelry. 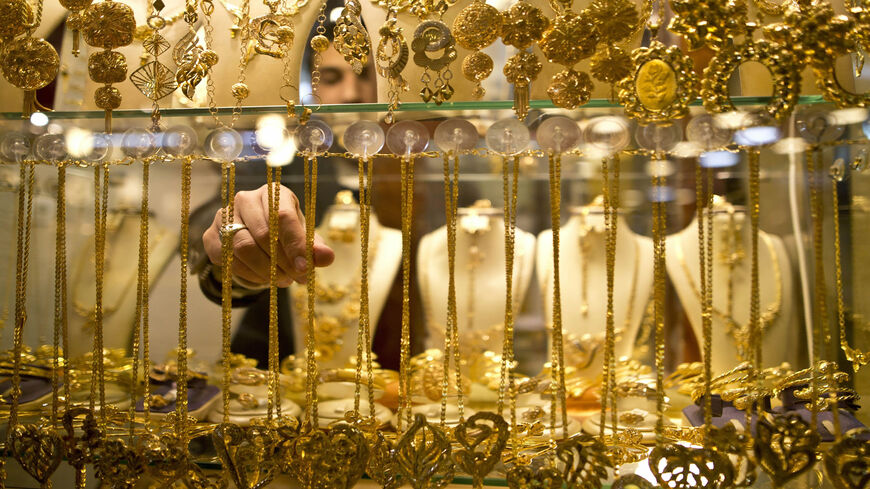 GAZA CITY, Gaza Strip — Al-Qaysariyya gold market is regarded as one of the oldest historical monuments in Gaza City, and is a hub for gold trading that was established during the Mamluk period by Sheikh Shams al-Din Zanki al-Himsi, a Gazan judge, who ordered its construction in 1476.

The market first served as a hub for merchants who flocked in on their horses, which were tied up to stables that later became gold shops.

In a corner of the ancient gold market, opposite the Omari Mosque — also known as the Great Mosque of Gaza — that dates back to the fifth century, sits al-Badrasawi jewelry shop, which began making gold in 2000.

The shop has gradually developed its gold industry, which climaxed during the outbreak of the coronavirus pandemic in March 2020. This was when all crossings with the Gaza Strip were closed as part of the precautionary measures to stem the spread of the virus, which affected the gold imports — thus encouraging local industries to work on replacing the gold products usually imported from the Gulf, Turkey and other countries.

The shop owner, Mohammad al-Badrasawi, 48, began working in the gold business about 30 years ago. He then shifted to gold manufacturing in 2000 to meet the market demands. Badrasawi now has five employees who are skilled in manufacturing gold.

“We now supply gold jewelry to all stores in and outside the gold market in the Gaza Strip,” Badrasawi told Al-Monitor.

Despite the great success in the gold industry in Gaza, some challenges are expected, mainly “the Israeli blockade that prevents the entry of raw materials, considered as dual-use materials [civilian and military] such as nitrate that helps us filter impurities from the gold,” Badrasawi said.

Gazan merchants rely on imported ready-made wax molds from Turkey, which help in modernizing designs and diversifying the available products.

“Israel, however, also bans the importation of several machines that are used to make more fashionable jewelry designs, such as the CNC technique, which is a computerized digital control technology to design new shapes. This is not to mention the laser machines to create new molds and get creative in our designs,” Badrasawi added.

The Egyptian authorities, in agreement with Hamas that controls the Gaza Strip, have closed the Rafah border crossing with Gaza since March 2020; it was reopened in February under strict measures from Hamas to allow the passage of urgent humanitarian cases only.

Abu Alaa Habboub is the owner of the Habboub jewelry shop, who purchases gold products from local manufacturers in Gaza, including the Badrasawi factory.

“Since the onset of the blockade in 2007, gold manufacturing has increased in Gaza to cover about 40% of the local market’s needs. This is due to restrictions on gold imports, which do not exceed 60% of the gold products in the local market,” Habboub told Al-Monitor.

He said, “With the outbreak of the coronavirus pandemic in March 2020, however, the local gold industry began to boom and now covers 100% of the market’s needs."

Habboub, who has been managing his shop for over 30 years, said, “People in general — and not only in the Gaza Strip — like to invest in gold especially during hard times. In Gaza, we had to reprocess gold and manufacture it locally to meet the local demand.”

He also explained that in the Gaza Strip, buying gold is a tradition especially for weddings. “According to customs and traditions, the bride would purchase gold using part of her dowry, which ranges between $1,000 and $4,000, depending on the family’s economic situation,” he said.

Habboub noted that the Israeli blockade and the deterioration of the economic situation has had an adverse impact on purchasing and dealing in gold, compared to the period prior to the blockade.

“Buyers now purchase gold to hoard it. Amid the deteriorating economic conditions the gold trade has drastically decreased. Due to the political sanctions imposed on the Palestinian Authority-appointed government employees in Gaza have been getting 70% of their monthly salary only since 2018, while the Hamas-appointed public servants receive 40%. People mostly buy gold for hoarding and not for ornamental purposes,” he said.

Bader Tarazi, a member of the Palestinian Union of Precious Metals, told Al-Monitor, “The gold industry in Gaza has boomed during the coronavirus crisis in terms of enhanced quality and variety of products compared to past years.”

He said, “Despite all the challenges facing gold manufacturers — including power cuts — the absence of government support and compensation for damages caused by the wars, this sector has remained resilient and continues to provide job opportunities for many unemployed skilled workers in the industry."

Tarazi explained that Gaza has about 20 small workshops and factories for gold jewelry manufacturing.

“Goldsmiths in Gaza lack modern capabilities and are banned from traveling abroad to train and develop their skills, but given the needs in the markets many are trying to import the necessary available tools to be able to develop their industry albeit within limited capabilities,” he concluded.