Gaza's local pottery industry is yet another victim of the Israeli-Egyptian siege, as exportation is all but impossible, and electricity cuts hinder production. 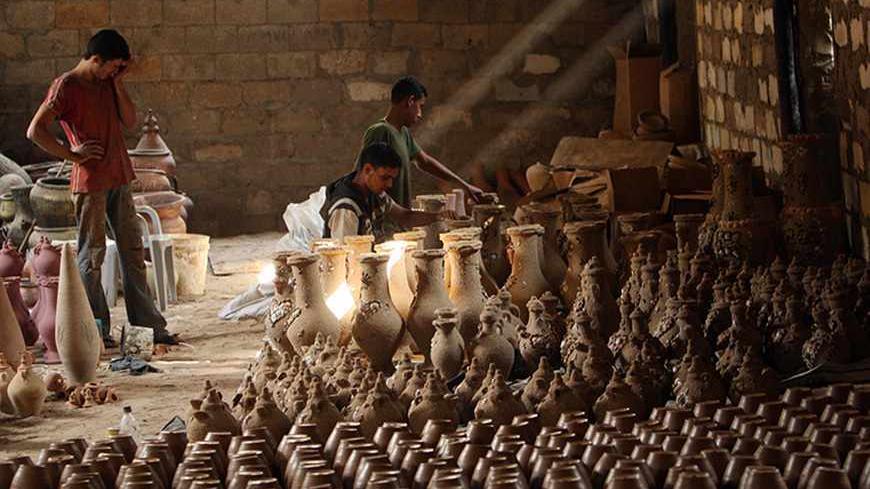 Palestinian workers make clay pots inside a pot factory, Gaza, Oct. 19, 2008. The making of clay pots is an ancient and traditional profession in the Gaza Strip. - REUTERS/Suhaib Salem

GAZA CITY — Using two fingers, 24-year-old Abdel Salam al-Arabi shapes a lump of clay as it rotates on an electric pottery wheel, transforming the solid mass into a vase or pot within minutes. He then dips his fingers in water to soften the sides of the emerging vessel and mold the shiny soft clay before leaving it to dry.

“Pottery relies on the rotation of the wheel and the movement of the fingers. I can form whatever I want with a mass of clay. I am now making a bird’s nest,” Arabi told Al-Monitor.

Arabi, who works with his father in a pottery shop on al-Nafaq Street in Gaza City, said that there had been five pottery shops on his street five years ago, but now theirs is the only one left. Even then, they are struggling to survive.

“Around 10 years ago, we had a small family factory in al-Faluja, in the northern part of the Gaza Strip, where my grandfather and father used to work. After the region became an urban residential area, and everyone started using plastic utensils and glassware, people lost interest in pottery. Our losses outweighed our profits, so we closed the shop,” Arabi recalls.

Muhammad al-Arabi, Abdel Salem’s 51-year-old father, said that the hardest stage in his craft is preparing the clay and making it moldable. His clothes and body stained with clay, he recalled his own father’s pottery shop, where he used to sit behind the old potter’s wheel, powering it with his feet for 14 hours a day.

Muhammad said he had felt bad having to shut down his father’s shop, but added, “Our factory is not the only one that was closed. There were more than 50 pottery shops and factories that produced clay utensils. Now, there are barely five in the whole Strip, due to the expenses of this craft and to people refraining from buying pottery given the spread of imported glass and plastic.”

He revealed that his daily wage as a worker is less than $10 and is sometimes half what it normally is when sales are especially weak. “Despite the poverty and exhaustion, and although I lost my fingers in the clay machine 30 years ago, I am proud of my profession, especially since it is an endangered trade,” Muhammad said.

The father and son agreed that the pottery trade is facing tough times, in part due to the hours-long electricity cuts that adversely affect the work and decrease its flow. Demand has reached levels so low that it is sometimes nonexistent.

“During the 2007 blockade, everyone wanted to buy pottery from us because of the lack of products on the market. They even asked us to make thousands of clay candelabras. But today, the blockade came after the market was saturated with plastic and glass merchandise that can last for years to come,” said Abdel Salam.

In the Arabis' pottery shop, which barely gets any light, one can observe all the different stages of pottery making. First, the masses of clay brought from agricultural lands in the north are exposed to the sun and made malleable using an axe. Then the clay is moved to a large basin filled with water, where one of the workers treads on the mixture of water and mud for hours until it becomes a paste. Pieces of gravel sink to the bottom of the basin, while pieces of straw and other impurities float to the surface and are removed.

Afterward, the paste is moved to a larger, insulated container designed to prevent leakage, forming a sort of clay lake. Once the mud absorbs the water, the clay is cut into large chunks and placed in a machine that kneads the clay and cuts it into cylindrical shapes.

Each clay column is then worked on the potter’s wheel and transformed into pots and other vessels. The objects are left to dry for several days and then moved to the furnace, where they are baked and become pottery.

Sabri Atallah, the owner of a pottery factory, has lost all hope of improving his livelihood. “We have tried many ways to improve the craft," he said, "but to no avail. We used to export pottery to Europe, but the Israeli exporter had written ‘Made in Israel’ on the clay products that were sent there. When we recently tried to export another shipment — but this time to Italy, and through a Palestinian exporter — the products were broken and we were left with only 20% of them. These products need a pottery maker to take care of them, but due to the Israeli occupation, we are not allowed to pass with our goods across the border.”

Atallah shared that the situation in Gaza is much more difficult than previously. Average citizens are barely able to find something to eat, let alone buy pots and encourage this heritage craft. Due to the lack of revenue, the pottery industry has not been able to develop or expand. The pottery factories that remain function in a rudimentary and primitive fashion.

“We don’t have the means to bring in modern instruments,” said Atallah. “We changed the potter’s wheel from a manual to an electric machine. We also developed the kneading machine ourselves, as we face great hardship in importing machines, not to mention their high prices. Moreover, the furnace we use operates on wood and not gas, and the smoke harms workers.”

He confirmed that there is no support whatsoever from the government or civil and international institutions for this craft. No one cares whether it continues to survive in Gaza.

Ayman, 42, and Bahjat, 32, are Atallah’s sons. They sat working behind the potter’s wheel. While Bahjat covered his pot in bronze, his brother made a piggy bank, a vase and a bowl in less than two minutes. Ayman said that the bowl, which Gazans use for salads, and the pot, used for cooking rice, are their best-selling items.

“This is a talent that I have learned since I was six years old,” Ayman told Al-Monitor. “My father used to take me and my brother with him to work to watch him and imitate him. The things you learn as a child are hard to forget. It is a very delicate and precise craft that needs skilled fingers to define the shape you want. One wrong move can spoil the whole thing.”