Gleam of hope in gold trade fades in Gaza

Israel banned the export and import of gold in the Gaza Strip after allowing its resumption in February. 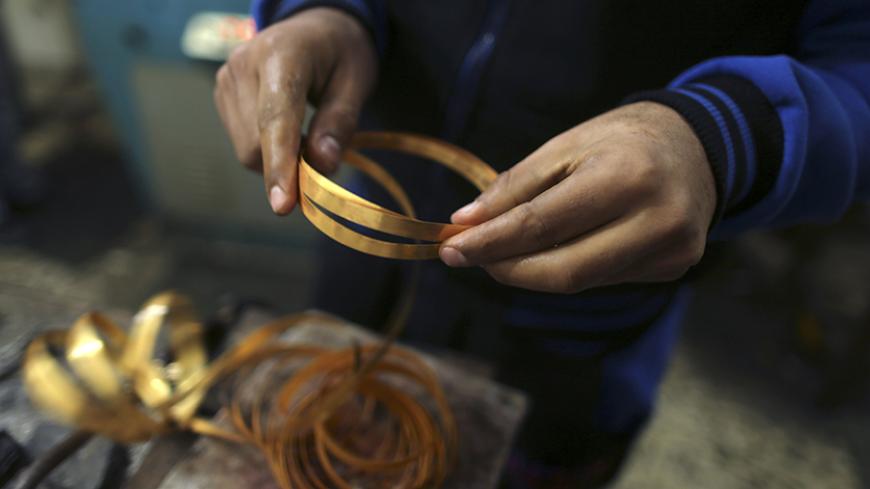 The Israeli siege imposed on the Gaza Strip has variously affected the territory's economic, business and financial sectors. Now, it is the gold market's turn. Nazmi Muhanna, general director of the Palestinian Crossing and Borders Authority, announced March 29 that Israeli officials had informed him that they were halting the movement of gold, in all forms, into and out of Gaza.

In February, Israel agreed to allowing 12 gold dealers and manufacturers to import and export gold to and from the Gaza Strip. Muhanna estimated the trade volume at 48 kilograms (106 pounds) per week between mid-February and late March. There are 40 gold factories in Gaza, a fairly large number for an area of only 365 square kilometers (141 square miles). Locally manufactured gold is estimated to account for about 70% of gold purchases, given that its price is fairly stable and it can often be sold without incurring major losses compared to other types of imported gold.

There has been no official explanation for the ban, but Hatem Oweida, undersecretary of the Ministry of National Economy, told Al-Monitor that Israel issued the decision with the goal of “tightening the noose” on Palestinians in the Gaza Strip. Oweida said, “This is despite the fact that the gold trade does not entail any security risk for Israel, which is capable of controlling the goods entering and leaving Gaza, and knowing that the gold market in Gaza is already ailing. Figures show that the first quarter of 2016 witnessed instability and decline as far as gold is concerned. In January, 169 kilograms of gold were stamped, 176 kilograms in February and only 143 kilograms in March, which points to weak purchasing power in the Gaza Strip as a result of the poor economic situation.”

Al-Monitor toured the gold market in central Gaza April 16 to speak with traders about the Israeli decision. One trader, Jihad Rafeh, said, “The seriousness of Israel's decision is in its timing, as its issuance coincided with the summer season, which is usually full of social events that require Palestinian women to buy gold accessories. Consequently, the gold market will suffer from further recession, knowing that it has already been spiraling downward since the start of the Israeli siege of Gaza in 2006. The first result of the decision was a drop in the price of gold from 25 to 23 Jordanian dinars [$35 to $32] per gram.”

The negative impact of the Israeli decision is expected to be felt with the start of the wedding season, which runs from April through September. Weddings are on the rise in the Gaza Strip, with more than 20,000 held in 2015, compared to 16,128 in 2014 and 17,359 in 2013. Palestinian brides typically buy $3,000 dollars worth of gold for adornment.

Another trader, Olian Obeid, told Al-Monitor, “The gold trade during the three weeks that Israel allowed trade between Gaza markets and the West Bank in late February amounted to $900,000 per week, which revived the gold market in Gaza. However, the ban will lead to a setback for the market, as it limits supply and increases price. Moreover, it will pave the way for the black market's return. While local factories in Gaza produce between 1 and 1.5 metric tons of gold [items] per year, between 100 and 150 kilograms were imported [prior to the Israeli decision].”

Another problem for the gold trade in Gaza is the dearth of professional manufacturing skills, with only modest capabilities available. This has made locally produced gold less appealing to consumers compared to imported gold objects. Although local factories in Gaza manufacture all kinds of rings, earrings, necklaces and bracelets, the manufacturing techniques used remain underdeveloped because Israel prohibits the entry of sophisticated machines and mechanisms that could improve quality and allow competition with higher-end, imported gold.

The gold industry in Gaza City lags behind that of other Palestinian cities. Hebron manufactures 65% of Palestinian gold, while Gaza ranks 14th among the 15 Palestinian administrative districts, with no precise figures available on Gaza’s gold stocks. According to July 2015 rough estimates by the Precious Metals Directorate at the Ministry of Economy, gold stocks in the West Bank and Gaza Strip totaled 80 tons, namely, 10 tons in gold shops, 5 tons in stored gold and 65 tons in gold jewelry for Palestinian women.

Mahmoud Atweh, chairman of the Gold Traders Union in Gaza, told Al-Monitor, “Israel's decision to ban the import and export of gold is a mere extension of the Israeli policy adopted since the Palestinian split in 2007 that [hampered] trade between the West Bank and Gaza. [The 40] gold factories in Gaza, employing more than 100 workers, are affected by Israel's decision. Add to this dozens of small manufacturing workshops and more than 300 gold traders. We are therefore establishing contact with the Jewelry Stamp Department in the West Bank to put pressure on Israel and have it back down on its decision.”

The Israeli decision could boost gold-smuggling operations to Gaza. The transfer of stamped smuggled gold into Gaza costs $3 per gram before it reaches the market. Smuggling would lead to major losses for certain traders who are caught, because the Gaza government confiscates unstamped gold. In other cases, their gold could of course be stolen while being smuggled from Dubai, Turkey, Jordan and Egypt into Gaza through the remaining tunnels between the Gaza Strip and the Sinai Peninsula.

Mohammed Miqdad, dean of the faculty of commerce at the Islamic University in Gaza, told Al-Monitor, “Israel's decision to prevent gold import and export has two aspects: a political one, aimed at tightening the siege on Gaza and extending the geographical separation between the West Bank and the Gaza Strip, and an economic one, as gold is a traded currency among Palestinians, and Israel seeks to maintain the economic and monetary blockade on Gaza. Consequently, this decision will negatively impact business in Gaza and will create a state of confusion as far as gold prices between Gaza and the West Bank are concerned.”

The Israeli decision will deepen the economic suffering of the Palestinians, as its impact will likely not be limited to gold traders alone. It may lead to gold factories laying off hundreds of workers and forcing some enterprises to close.