Will US retaliate against Iran for detaining sailors?

The Obama administration has repeatedly challenged Iranian restrictions on freedom of navigation. Will that continue after the nuclear deal? 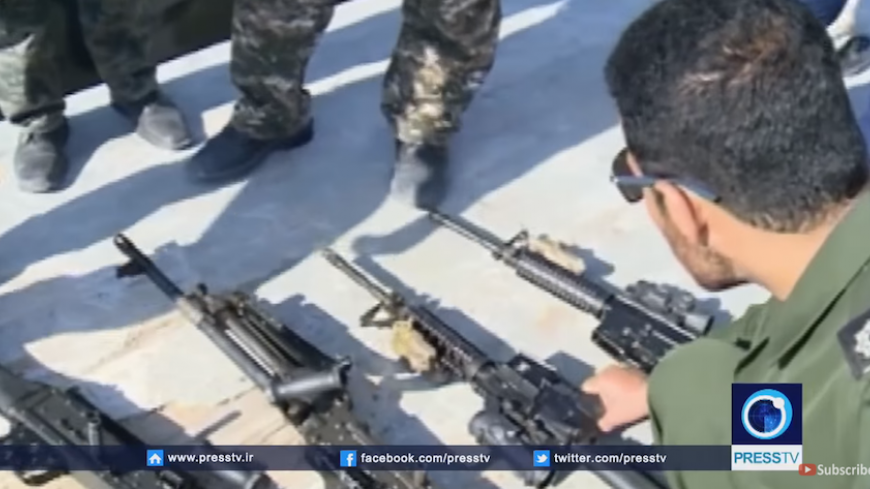 The Obama administration hasn't ruled out retaliating against Iran for detaining 10 American sailors, US officials told Al-Monitor, even as the delicate nuclear diplomacy between the two countries greatly complicates any response.

While the US Navy hasn't finished its investigation, Defense Secretary Ash Carter has already said the two captured US riverboats had accidentally strayed into Iranian territorial waters. Iran asserts that it must be notified ahead of time of so-called innocent passage incursions by warships, but President Barack Obama has previously challenged that claim as contrary to international maritime law.

Sherwood declined to elaborate on what form such a legal action could take, and experts doubt any avenue for redress exists at all. The United States, however, could issue a diplomatic protest, continue to challenge Iranian restrictions with naval operations — or both.

Ned Price, a spokesman for the National Security Council, said the White House "wouldn't want to get into a hypothetical like that" while the investigation continues.

Senate Armed Services Chairman John McCain, R-Ariz., has accused the administration of putting US sailors at risk for failing to stand up to unilateral Iranian restrictions on freedom of navigation.

"The administration is pretending as if nothing out of the ordinary has occurred. Vice President Joe Biden described the incident as ‘standard nautical practice.’ That assertion is patently false," McCain, a former naval aviator during the Vietnam War, said in a statement. "What’s worse, by failing to affirm basic principles of international law, it places our Navy and Coast Guard vessels and the men and women who sail them at increased risk in the future."

Others, however, say it's not too late for the administration to stand up for freedom of navigation.

Steven Groves, a senior research fellow at the conservative Heritage Foundation who has written extensively about the Law of the Sea, said the administration's next move will be critical. While he criticized Biden's comments, uttered when it still appeared the boats may have broken down, Groves applauded Secretary of State John Kerry — a former commander of small Navy craft himself — for saying that the sailors had nothing to apologize for.

"To say [the Iranians] didn't do anything wrong is incorrect and may embolden them to continue to stop US vessels behaving perfectly well," Groves told Al-Monitor. "You have to protest it."

At issue is the widely recognized right of naval ships the world over to enter another country's waters as long as they're doing so without ill-intent. If the coastal state determines that the passage of another country's warships would be "prejudicial to its peace, good order or security," based on a number of agreed-upon factors, the UN Convention on the Law of the Sea (UNCLOS) requires that the coastal nation order the offending ship to depart before taking any other action, which doesn't appear to have happened in this case.

"I would not characterize the Iranian action as aggression, but boarding and seizing the US vessel[s] clearly violated the sovereign immune status of the vessel[s] under international law, including UNCLOS," retired US Navy Capt. Raul Pedrozo told Al-Monitor via email. "Clearly, a diplomatic response is in order, which should highlight (1) violation of the sovereign immune status of the vessel and (2) illegal prior permission requirement."

Pedrozo, a former legal adviser to the US Pacific Command, has previously urged the Obama administration to ramp up its challenges to restrictions against freedom of navigation, notably by China.

Iran has adopted two restrictive policies that may help explain why the US sailors were intercepted in this case. In addition to demanding prior notification before warships enter the 12-mile-deep territorial waters along its coastline and islands, Iran has perhaps even more controversially sought to prohibit "foreign military activities and practices" within its 200-mile-deep exclusive economic zone (EEZ) — basically the entire Iranian side of the Persian Gulf.

Tehran first laid out those claims when it signed (but never ratified) the 1982 UN Convention on the Law of the Sea, which codifies centuries of maritime practice.

"In the light of customary international law," the Iranian delegation wrote at the time, "[treaty provisions] recognize (though implicitly) the rights of the Coastal States to take measures to safeguard their security interests including the adoption of laws and regulations regarding … the requirements of prior authorization for warships willing to exercise the right of innocent passage through the territorial sea."

Iran further developed its position in its 1993 Marine Areas Act. That legislation spells out that the "passage of warships" is "subject to the prior authorization of the relevant authorities of the Islamic Republic of Iran."

That position is not generally accepted, however. Particularly since the United States and the Soviet Union issued their "Joint Statement on the Uniform Interpretation of Rules of International Law Governing Innocent Passage" in 1989, the US position has gained traction around the world.

"All ships," the 1989 statement says, "including warships, regardless of cargo, armament, or means of propulsion enjoy the right of innocent passage through the territorial sea in accordance with international law, for which neither prior notification nor authorization is required.”

After Iran passed its 1993 law, the Bill Clinton administration notified the United Nations that it would challenge it.

During the first six years of his term, Obama has done exactly that. The administration has challenged Iran every year since Obama took office, Navy records show, through the use of Freedom of Navigation (FON) operations whose stated goal is to "preserve the rights, freedoms, and uses of the sea and airspace guaranteed to all nations in international law."

The last publicly available report on such operations, for FY 2014, indicates challenges to Iran's "excessive straight baselines; restrictions on right of transit passage through Strait of Hormuz to signatories of the Law of the Sea Convention; [and] prohibition on foreign military activities and practices in the EEZ." The Navy last challenged Iran's prior permission for "innocent passage" of foreign warships three years prior.

Pedrozo said the Navy would conduct 30-40 such challenges per year in the 1980s and 1990s, versus half that number today.

"You can never have ‘enough’ FON operations; the more the better in order to demonstrate our non-acquiescence in unilateral acts of other states designed to restrict the rights and freedoms of the international community to use the world’s oceans," he said. "If we fail to routinely exercise our navigational rights and freedoms in contested areas, those rights and freedoms will be lost over time."