Does Iranian law green light encounters with US warships?

The legal arguments underpinning US and Iranian views on the Law of the Sea should not be overlooked as tensions once again mount over the passage of US military vessels through the Strait of Hormuz. 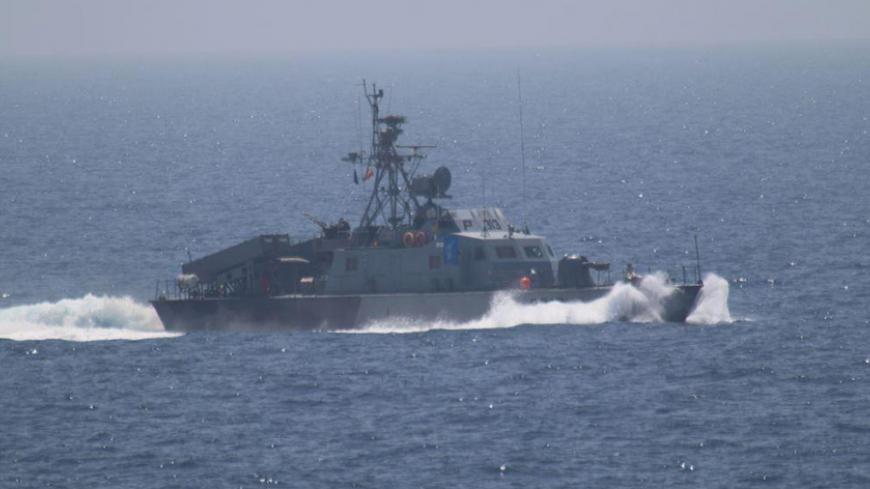 This is one of five military vessels from Iran's Islamic Revolutionary Guard Corps that approached a US warship hosting one of the United States' top generals on a day trip through the Strait of Hormuz, July 11, 2016. - US Navy/REUTERS

TEHRAN, Iran — Tensions appear to be mounting again in the Strait of Hormuz, as seen in a video released by the US military Aug. 23. The footage shows four patrol boats operated by Iran’s Islamic Revolutionary Guard Corps (IRGC) approaching a US destroyer in the narrow waterway. US military officials say two of the patrol boats came within 300 yards of the destroyer USS Nitze. A series of similar incidents were reported the following day with one encounter resulting in the US ship firing warning shots. Earlier, on July 12, US media had reported five IRGC speedboats coming within close proximity of a US ship in the Persian Gulf.

The Pentagon has described the actions of the Iranian naval vessels last month as “unsafe and unprofessional.” Iranian Defense Minister Hossein Dehghan, however, defended the movements of the IRGC patrol boats, stating, “Preserving the country’s security at sea and in the Persian Gulf is our responsibility. It is natural that these boats would be continuously monitoring the traffic of foreign vessels in Iran’s territorial waters.” Were the Iranian boats, however, acting in accordance with domestic and international laws?

The United States considers the Strait of Hormuz to be international waters, and as such, an area where its vessels are allowed to move freely, without interference from littoral states. This attitude is evident in the messages transmitted by the US vessels to the Iranian boats. Indeed, the Transit Rights of Passage under the Law of the Sea says that the littoral state, in this case Iran, has no right to interfere in the passage of foreign ships, whether military or civilian. The Iranian government, however, citing a series of legal arguments, rejects this position.

In 1993, Iran approved the Act on the Marine Areas of the Islamic Republic of Iran in the Persian Gulf and the Oman Sea. The statute extends Iran’s sovereignty beyond the “Strait of Hormuz and the Oman Sea, to a belt of sea, adjacent to the baseline, described as the territorial sea.” It also declares that the passage of foreign vessels is subject to the principle of innocent passage so long as it is not prejudicial to good order, peace and security of the Islamic Republic of Iran.

Moreover, Article 8 states, “The Government of the Islamic Republic of Iran, inspired by its high national interests and to defend its security, may suspend the innocent passage in parts of its territorial sea.” In addition, Article 9 states, “Passage of warships, submarines … through the territorial sea is subject to the prior authorization of the relevant authorities of the Islamic Republic of Iran. Submarines are required to navigate on the surface and to show their flag.”

Iran's logic is based on the Strait of Hormuz being divided into three respective northern, central and southern zones. Ships crossing the northern zone must pass through Iran’s territorial waters, with the ones crossing at the extreme end of the northern zone being forced to enter the territorial waters of the Iranian islands of Greater Tunb, Lesser Tunb and Faror. The Sultanate of Oman, the southern Strait of Hormuz littoral state, has subjected the passage of foreign warships to prior notification in a similar vein.

Iran continues to abide by Article 16 of the 1958 Convention on the Territorial Sea and the Contiguous Zone, the first part of which states, “The coastal state may take the necessary steps in its territorial sea to prevent passage which is not innocent.” Moreover, based on Articles 14 and 16 of the 1982 United Nations Convention on the Law of the Sea (UNCLOS), the coastal state may engage in certain measures in its maritime waters for security reasons. This includes stopping the passage of ships, requesting information from foreign military vessels or calling on vessels to vacate the waters immediately.

Considering that part of Iran’s political establishment views the United States as an enemy and believes the main reason for the US military presence in the Persian Gulf is to threaten Iran, Tehran maintains the right to monitor the movement and passage of “enemy ships” and views any restrictions placed on military ships of enemy countries as self-defense.

Another relevant matter is that in December 1982, one day before Iran signed the UNCLOS, Tehran officially stated, “It seems natural and in harmony with Article 34 of the 1969 Vienna Convention on the Law of Treaties, that only States Parties to the Law of the Sea Convention shall be entitled to benefit from the contractual rights created therein including the right of transit passage through straits used for international navigation.”

Ultimately, while tension over the passage of US naval vessels in the Strait of Hormuz is occurring in the shadow of broader political tensions between Tehran and Washington, one should not overlook the different legal interpretations each of these countries has regarding military law in the strait. In other words, Iran’s coast guard and military see their actions as being in line with their legal duties in their territorial waters, as set out by Iranian law, the Law of the Sea and the United States’ not having signed the 1982 convention.