Khan al-Noss, one of many caravanserais found along the Silk Road in Iraq and other neighboring countries, is yet another neglected and disappearing Iraqi heritage site. 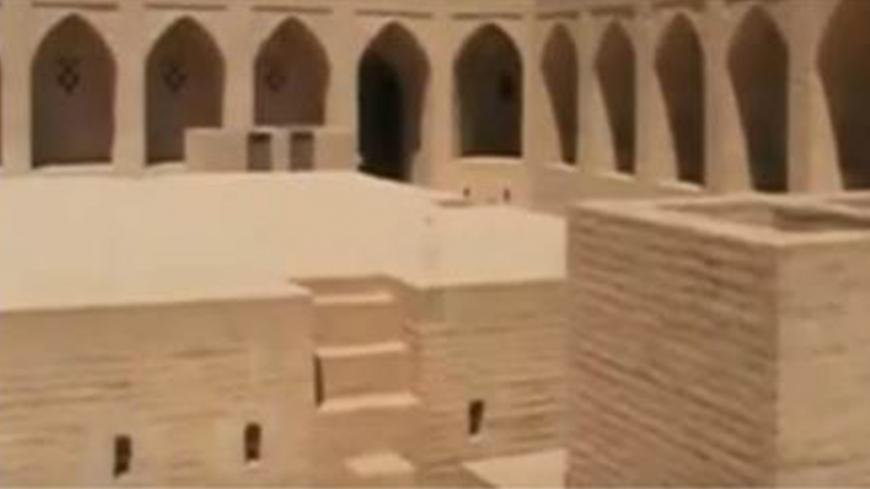 The ruins of Khan al-Noss, a caravanserais along the Silk Road, remain one of Iraq's most historic landmarks in the region. - Wassim Bassem

KARBALA, Iraq — In an interview with Al-Monitor, 85-year-old Hussein Khazraji described how he used to cross the distance between his hometown, Najaf, and Karbala on foot in the 1950s. He would visit the holy shrines, especially that of Hussein bin Ali in Karbala, as part of the hajj. He and other pilgrims would stop halfway on the nearly 47-kilometer (29-mile) journey between the two cities to spend the night at the enormous Khan al-Noss building dating back to 1774.

Khazraji still vividly remembers this ancient edifice that used to serve as a hostel, where “horses and other livestock would enter the khan’s vast courtyard during the night while people would sleep over in the dozens of rooms in the upper floor.”

This once grand building now lies in ruins. Al-Monitor visited the location only to find a shapeless structure of yellow bricks, surrounded by vegetation. On close inspection, the rubble's only remaining features were a flattened dome and the remnants of Islamic decorations that had fallen victim to the wind, rain and human negligence.

While there, Al-Monitor interviewed Haleem Yaseri, an archaeologist and history teacher at Babil High School who grew up in Karbala. He remembered of the building's entrance, “It had a wooden gate guarded by armed men, with a small door through which people would enter and exit. The gate would be locked during periods of unrest and at night to prevent thieves from attacking the khan.”

A tour inside the building revealed dozens of rooms adorned with Islamic arches surrounding a vast yard, where brick remnants were piled alongside the remnants of wells. Vegetation covered everything.

Yaseri pointed out, “These khans were not only hostels from the past but more than this, they used to be a place for communication as well as cultural exchange and trade, especially during religious events. These huge buildings were mainly built on desert crossroads or between big cities, and hosted people from different backgrounds.”

From a historical point of view, these khans, or caravanserais, embodied the architectural culture in the region. Caravanserais were once plentiful along caravan routes called the Silk Road, which stretches across Turkey, Iraq and Syria all the way to China, providing places for merchants to rest after their arduous journey and to exchange goods during their stays.

Khan al-Noss is one of dozens of other well-known khans such as Khan al-Musalla northeast of Najaf and the famous khans of Baghdad such as Khan Jahan, Hellah’s khans and Khan Abu Dahn in Karbala.

Khan al-Noss is now one of Iraq’s historic buildings that have been neglected and reduced to ruins. According to a statement issued by the Supreme National de-Baathification Commission on Feb. 27, 2014, the place was used as a cemetery to bury those killed in the March 1991 uprisings by the Saddam Hussein regime.

It can be argued that modern transportation is the main reason behind the disappearance of these khans. Today, people use cars and no longer need to spend the night at khans during their travels. Journeys that used to take days are now made in hours.

But these buildings were much more than hostels, and their architecture is a priceless artistic and cultural asset. Their neglect has been a major cultural loss to Iraq.

Al-Monitor found that many young people know nothing about these khans. When asked, Ahmad Kazem, a 20-year-old university student from Babil, said that they were “a hitching post for animals and livestock,” while another student, Lamia Saleh, 22, said they were “a police station from the Ottoman era.”

In the countryside of Haydariyya, where Khan al-Noss is located, these sites survive only stories told by the elderly.

Al-Monitor spoke to Ali Lami, a 65-year-old tribal sheikh living near Khan al-Noss, who said, “My father, who lived through the last period of prosperity these khans knew in the Ottoman era [1535-1918], told me that these khans belonged to wealthy merchants who had built them so that travelers would gather there to exchange goods and make profits.”

Al-Monitor spoke to Hussein Yasser Abboudi, the director of the Karbala Antiquities Committee affiliated with the Iraqi General Directorate of Antiquities. He said, “The local government of Karbala is planning to develop these historic sites to turn them into touristic sites that generate revenue and help eradicate unemployment, as these khans will be turned into rest houses.”

Iraqi parliamentarian Ibtisam Hilali of Karbala told Al-Monitor, “Given the current financial crisis, the best way to benefit from these places is through drawing investments and turning them into restaurants, hotels and entertainment facilities, especially since thousands of pilgrims come to Iraq each year to visit the holy shrines.”