Only 3% of incumbent Iranian members of parliament are female, but Iranian women are campaigning to drastically change the parliament's huge gender imbalance through the ballot box. 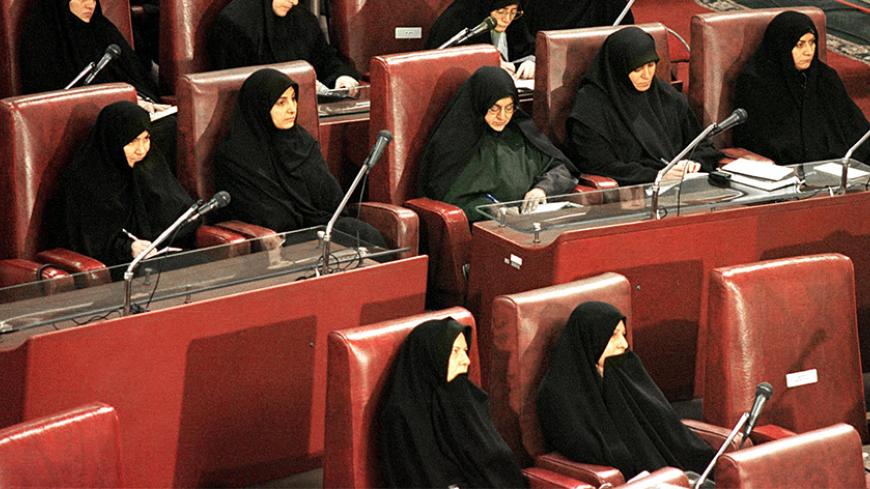 Female members of parliament attend the inaugural session of Iran's sixth parliament, Tehran, May 27, 2000. Thirteen women were elected to that parliament; the current one has nine. - BEHROUZ MEHRI/AFP/Getty Images

Nine women and 281 men. Such is the composition of the Iranian parliament. Rights activists believe this lopsided gender imbalance is one reason why so many discriminatory laws against women have been passed by the current legislature, in office since 2012. Ahead of the upcoming Feb. 26 parliamentary elections, a group of women's rights activists organized Changing the Male-Dominated Face of the Parliament, a campaign to address the dearth of women in the legislature.

The campaign criticizes incumbent female members of parliament's failure to pursue women’s rights and also encourages Iranian women to participate in the next elections as candidates as well as voters. The goal, stated on the group's website, is to win “at least 50 seats for egalitarian women.” To achieve this objective, members of the campaign have also formed committees such as Red Cards for Anti-Women Candidates, I Will Be a Candidate and 50 Seats for Egalitarian Women.

In a conversation with Al-Monitor, Shahla Mir Galoy Bayat, one of the nine incumbent female members of parliament, described the machinations related to one bill that highlights some of the reasons why many want more women legislators and why they have been critical of current members of parliament. Bayat explained, “When the administration sent one bill to parliament, the National Security and Foreign Policy Commission added certain clauses that would violate women’s rights. We, members of the Women’s Faction, held meetings with the speaker and discussed the bill. However, since our number is very small compared with the number of male parliamentarians, we thought that more than likely we would not be able to stop the bill. Therefore, we decided to approve it as it is, with the hope of changing it in the future.”

Bayat said Changing the Male-Dominated Face of the Parliament is a good initiative and that Iranian women should hold “at least 30% of seats” in the body. She also said, however, “Women are unlikely to win 50 seats in the upcoming parliamentary elections. We should work harder to achieve these goals in future elections, and of course we should see how women rights’ activists are going to perform in the upcoming elections and how the general public will react.”

Of note, members of Changing the Male-Dominated Face of the Parliament are not just trying to increase the number of female parliament members. Rather, they want 50 seats for “egalitarian” women. In an interview with Al-Monitor, Nahid Tavasoli, a women’s rights researcher and activist, said, “The female members of parliament who are currently serving [in office] have shown, for whatever reason, that they do not believe in equality between men and women.”

Tavasoli told Al-Monitor she is hoping that with the aid of the campaign, legislators in the next parliament will be “concerned about women’s rights” and will work toward ensuring equality for women. She added, “We should not forget that women’s civil society can never stop monitoring parliamentarians and should constantly follow-up to make sure that legislation that is passed is improving women’s conditions and are not discriminatory against them.”

In this vein, incumbent female legislators appear to be more concerned with justice for both genders rather than gender equality. Bayat contends that if there is justice for both men and women in society, women will learn about their rights and pursue them through legal means. She added, however, “I think gender equality can create problems for women. For example, if we want to implement gender equality, we should no longer allow women to take maternity leave. We have had many discussions in parliament in order to make sure that no bill undermining justice [for the two genders] is adopted.”

The founders of Changing the Male-Dominated Face of the Parliament have insisted that they are not seeking political office themselves. They have, however, as individuals, occasionally backed certain political figures.

When President Hassan Rouhani registered as a candidate for the Assembly of Experts elections Dec. 21, he urged all "eligible ladies" to register and participate in the parliamentary vote. Shahindokht Molaverdi, Rouhani’s vice president for women’s and family affairs, as well as Faezeh Hashemi, a former member of parliament who represented Tehran in the fifth parliament, have both advocated greater female participation in the upcoming parliamentary contest.

Changing the Male-Dominated Face of the Parliament has been successful in gaining the support of women’s right activists in cyberspace, including members of the Women’s Campaign to Gain 100 Seats. Nonetheless, while acknowledging the increase in the quantity and quality of female candidates, Tavasoli believes that women “still have a long way to go to reach their goal of occupying 50 seats in the parliament.”

For now, the more than 1,200 women who have registered to run for parliament, alongside more than 10,000 male candidates, must await approval by the Guardian Council. Tavasoli is not optimistic. She remarked, “Considering their male-dominated views, members of the Guardian Council are more likely to disqualify female candidates. If you pay attention to the comments made by Friday prayer leaders about women, then you would understand why I am not optimistic.”

Tavasoli, also editor-in-chief of the cultural and artistic magazine Nafeh, had registered to run in the seventh parliamentary elections, held in 2004, but was disqualified by the Guardian Council. At that time, the council even disqualified some incumbent members of parliament. For the time being, members of the campaign to change the face of parliament who have reformist and moderate tendencies have independently registered as candidates are and like everyone else must wait for the Guardian Council's decision.

Tavasoli says that if egalitarian women can reach their goal of winning 30% of seats in parliament, then perhaps there will no longer be a need for the kind of campaigns initiated this election cycle. For now, however, the struggle continues. Tavasoli said, “Considering that right now women still have many unfulfilled demands and requests, it is likely that similar, additional campaigns will emerge as well. Therefore, as long as women’s demands regarding legislative reform are not being addressed in parliament, we will continue this fight.”