History lovers and environmental activists are battling state plans to build a Druze settlement at the ancient battlefield Horns of Hattin, where crusaders confronted Saladin's army in 1187. 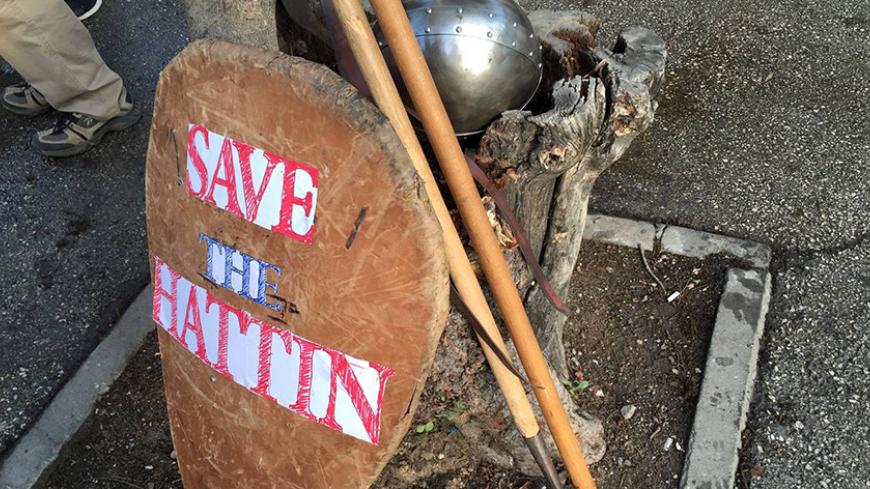 Demonstrators protest their opposition to the new community settlement for Druze citizens in front of the prime minister's residence in Jerusalem, Dec. 30, 2015. - Yuval Avivi

The “crusaders” have once again taken over Jerusalem. Wearing chain mail and metal helmets and carrying flags, shields and swords, they arrived Dec. 30 at the prime minister’s residence for another battle. This time, they seek to express their opposition to a government initiative to establish a new community settlement for Druze citizens in the Galilee, in precisely the area where the battle of the Horns of Hattin took place in 1187. As is fitting for warriors, they were not deterred by the rain or the Jerusalem chill. As they surrounded the residence, they held signs that read “Deus vult,” the crusaders’ rallying cry that means “God wills” in Latin.

These protesters are avowed history buffs who annually re-enact the battle of the Horns of Hattin, in which the crusaders were defeated by Saladin’s soldiers. The re-enactment includes full dress, weapons, horses and tactical maneuvers in keeping with the period. They fear this tradition will come to an end and this historically, religiously and archaeologically important area will change forever.

At the protest in front of the prime minister's residence they were joined by archaeologists and kibbutz members from the neighboring religious Kibbutz Lavi, whose residents also oppose the project at its planned location. 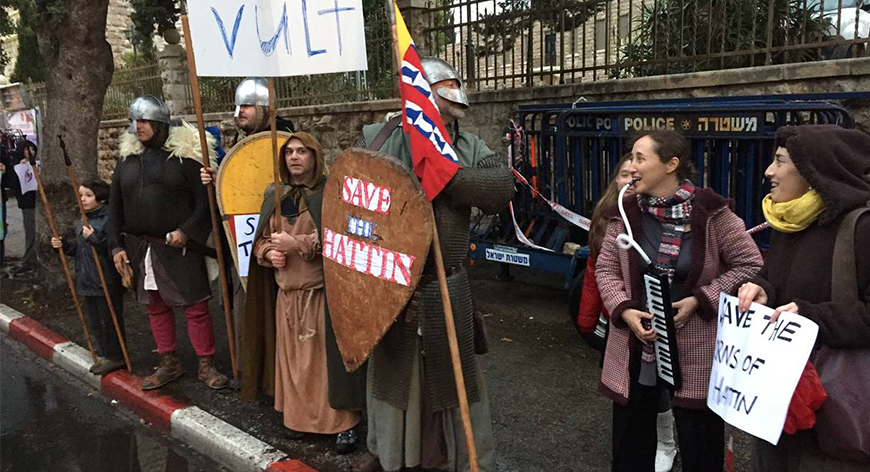 Protesters dressed for the re-enactment of the battle of the Horns of Hattin hold signs in front of Prime Minister Benjamin Netanyahu's residence in Jerusalem, Dec. 30, 2015. (photo by Yuval Avivi)

Gennady Nizhnick, an expert in biblical archaeology and the head of the Jerusalem Kingdom Club for historical re-enactment, came to the protest wearing chainmail, which his friend anointed with oil when it started to rain so that it wouldn’t rust. According to him, the new settlement is supposed to house 10,000 people, the same as the number of casualties at the famous battle.

“In the Middle Ages the king was the one who decided everything, and so we came directly to the prime minister,” Nizhnick said.

"Why establish a settlement at the spot that should be a [UNESCO] World Heritage Site and is important to many groups of people around the world?" wondered archaeologist Rafi Lewis, whose research focuses on this area. “A new Druze locality should be established, but not there.” He said the area is rich with archaeological findings, but only part has been excavated. Its topographical characteristics led to many historical events happening exactly there: Napoleon fought there, and battles from the War of Independence occurred at that spot. Lewis added that some, "mainly American Protestants and evangelists, identify this place as the Mount of Beatitudes," the place where Jesus delivered the Sermon on the Mount.

In November, a subcommittee of the National Planning and Building Administration authorized the establishment of a new settlement intended for the Druze population in the Horns of Hattin area, as the government’s attempt to solve the housing crisis in the sector.

“These lands belong to the state,” argued Deputy Minister and Druze Ayoob Kara in the printed Makor Rishon newspaper. “The place doesn’t disturb anyone. It’s desolate.”

According to Lewis, the process of moving the plan along is happening faster than usual to prevent opposition by different elements, among other reasons. Alongside the archaeologists and historians, environmental organizations also want to see the settlement built elsewhere.

On Jan. 5, the plan was set to come up for authorization at the National Planning and Building Administration. A source at an environmental organization involved in this type of decision told Al-Monitor that the administration’s authorization is not the final word, and that even afterward, objections to the plan can be submitted.

All the groups opposing the plan want to emphasize that they support the establishment of a new Druze settlement — a very sensitive topic, given the government's discriminatory treatment of the Druze, but not at this site.

"The area is on UNESCO’s tentative list of places to be recognized as World Heritage Sites,” Nizhnick said. “It’s a place that could attract tourists and contribute to the local community. There are similar sites around the world where no one would dream of building. It’s a monument in itself, a holy place for three religions and part of the historical landscape that is important to conserve. The hill itself was declared a national park, but the slopes where the battle took place should also be given that status. Massive building there would completely change the character of the area.”

For his part, Lewis said, “It’s a world heritage site, which while not directly related to Israeliness or Hebrew culture, was placed in our hands for safekeeping. It’s immoral to abandon it for some political reasons.” He argued that many organizations and politicians are afraid to oppose the construction at the site because they don’t want to be seen as biased against the Druze.

Ruti Bolvik, a member of Kibbutz Lavi, said that the fact that this is a Christian and Muslim heritage site does not matter to religious kibbutz members, explaining, “The damage to the historical landscape would be terrible. It’s not just another field. It’s a historical site important to three religions and it’s the last place they should build.”

Nati Rosensweig, the manager of livestock at the kibbutz who identifies as a “cowboy,” agrees with Bolvik. "Our cattle grazes just at that spot," he said, "but there are wild animals there too, like herds of gazelles that would be hurt by the construction. They’re planning to build 2,500 housing units. It’s clear the national park would be affected.”

Kibbutz members wonder why the Ministry of Tourism does not develop the area as a tourist attraction, and note that everyone at the kibbutz is familiar with the area’s history.

Another group that supports the struggle against the plan is Lev BaGalil (Galilee in Our Heart). “We still really support the establishment of a Druze settlement,” said Ofir Shik, the director of the association. “At last the government is taking a step in the right direction for this sector. But on the other hand we’ve learned of the complexity of the chosen location, and these are values that shouldn’t clash. The advancement of the Druze population is necessary, but the conservation of heritage sites that are important to so many cultures is also critical. There are good alternatives, which many in the Druze community prefer because of their proximity to existing towns.”

As Lewis noted, the regional topography has seen various battles at the Horns of Hattin for hundreds of years. Now it seems that a new battle is being waged. The only question that remains at this point is which side will lose.