In an interview with Al-Monitor, Yassine Abdel Sabour, the first MP for the Nubian people in the new Egyptian parliament, stresses his commitment to advancing the rights of his people in the legislature. 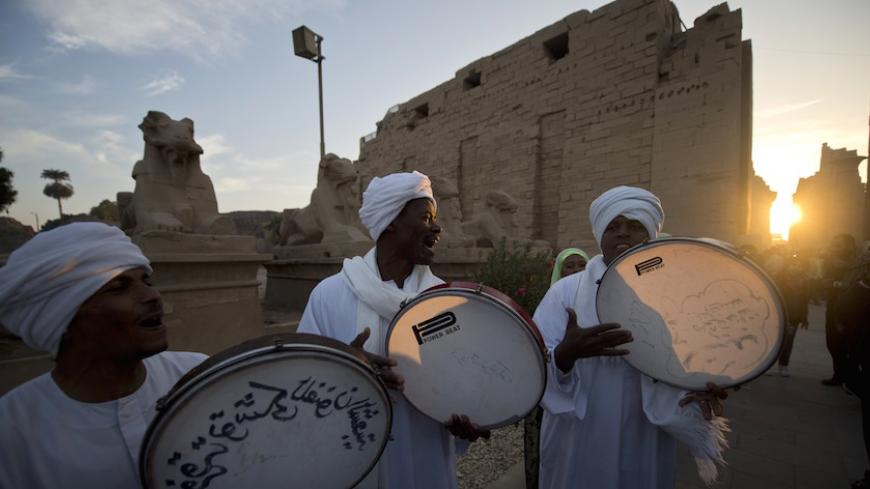 An Egyptian Nubian band performs traditional songs as they celebrate the aligned of the winter solstice sunrise to the Temple of Karnak, in the southern Egyptian city of Luxor, Dec. 21, 2013.

CAIRO — The first deputy for the Nubians in Egypt’s parliament, Yassine Abdel Sabour, is well-aware of the weight on his shoulders to deliver and achieve the demands of his people, who claim that the state has neglected Nubians for 120 years. In an interview with Al-Monitor, he underscores many of the problems Nubians suffer from, mainly health and sanitation issues, and the desire of the Nubian people to achieve their historical demand to return to the banks of the Aswan High Dam. He also expressed his fears of the demise of the Nubian language and criticized the state for overlooking the history and achievements of Nubians in public education curricula.

Al-Monitor:  As the first MP for the Nubians in parliament, what were the most noticeable obstacles you encountered during the elections?

Abdel Sabour:  I did not encounter any difficulties or obstacles during my candidacy in the elections as the competition was between candidates belonging to interrelated families. However, perhaps the low turnout of voters was an obstacle after all, and allocating one parliamentary seat for the Nubians is not enough to achieve their demands and historical rights.

Al-Monitor:  What are the main problems facing the Nubians judging from your electoral tours?

Abdel Sabour:  The main problems facing the Nubians are the deterioration of health services, as there is no medical staff in hospitals and health units, given the lack of lodgings and suitable financial remunerations for such staff. We have 35 health units in addition to two big hospitals that lack doctors. Another problem is the lack of a sewerage network, which prompted Nubians to use the tanks under their houses, causing them to wear out and become another burden on the state. The state has allocated $14 million for replacing or renewing housing units, as they are considered shelter homes, but this remains insufficient. The solution lies in establishing a sewerage network, and there is a need to deal with agricultural expenses and canals, which caused underground water to increase, flooding villages in Nubia.

There is also another problem. For 52 years, Nubians have been hoping to return to the banks of the Aswan High Dam and to receive compensation, as 8,000 Nubian families were forced to leave their homes. Affected Nubians were promised to receive a house and 2 feddan [2.1 acres] of land in compensation, but this never happened under the pretext that the state’s budget did not allow it.

Al-Monitor:  What are the most important laws regarding Nubians you will be proposing?

Abdel Sabour:  Implementing Article 236 of the Egyptian Constitution, which gives the Nubian people the right to return to the banks of the Aswan High Dam, and implementing Articles 47 and 50, which affirm the preservation of different identities and the Egyptian heritage. This is in addition to general laws pertinent to all Egyptians, mostly the amendment of the right of demonstration, which must be amended so that [demonstrators] notify the Ministry of Interior of [their wish] to hold demonstrations rather than taking its prior permission, and to oblige people to preserve public facilities and not to sabotage roads. Also, officials are required to solve problems, hold discussions with demonstrators and determine places for demonstration. Demonstrations ought to be organized not suppressed, otherwise we would be creating a dictatorship.

Al-Monitor:  Will you call for the adoption of a law to resettle the Nubian people on the banks of the Aswan High Dam? Do you expect the state to respond to that?

Abdel Sabour:  We do not need to approve a new law. According to the constitution, Nubians have the right to return to the banks of the Aswan High Dam, and the parliament ought to respond to their demand. Should the parliament refrain from doing so, it becomes unconstitutional because it is not applying the constitution. The state ought to fulfill this demand. We believe the time is very appropriate for our historical demand to be fulfilled. It would be unjust to us if the state denied us our right.

Al-Monitor:  Is the state insisting on not allowing the Nubians to own properties, giving them only their usufruct right?

Abdel Sabour:  I call on the state to establish a resettlement committee for Nubians and then discuss the law at a later stage. Nubians are Egyptian citizens, and they have the right to own properties. However, there is no difference between the usufruct right and the acquisition right. We will not leave our territories.

Al-Monitor:  Since you are the head of the teachers' union in Aswan, do you think public school curricula overlook Nubians' role in Egypt?

Abdel Sabour:  Nubians have been ignored for 120 years, and they have suffered and kept silent for the sake of their nation. Therefore, Egyptian students do not know about them. The intentional neglect of Nubians' history is a crime against human history. It should be included in school curricula, as the whole world is interested in it, except for Egypt. Of course, I will ask the minister of education to include the Nubian history in the curricula as well as the heroism of its people.

Al-Monitor:  You have mentioned that the illiteracy rate in Nubia is barely 1%. Why so?

Abdel Sabour:  Nubians are naturally smart. The ancient Nubia had two schools, Aliba and Qarta, and they played a role in spreading education among their people.

Al-Monitor:  How will you address the concerns of your district's people regarding the disappearance of the Nubian language?

Abdel Sabour:  I ask all people interested in Nubian history to prepare a booklet to teach citizens of Nubia their language. The Nubian language is disappearing, especially among the new generation.

Al-Monitor:  What are the main demands of Nubian women from the current parliament?

Abdel Sabour:  They want job opportunities and small projects for them specifically, especially since they have high qualifications in producing handicrafts.

Al-Monitor:  Did you take practical steps to forward your proposition to form a parliamentary committee that would visit Ethiopia and discuss the Renaissance Dam crisis with the Ethiopian parliament?

Abdel Sabour:  I suggested the formation of a parliamentary committee to tackle the Renaissance Dam crisis, and I will submit my proposition to the foreign affairs' committee in the parliament in order to form the committee, hold meetings and have mutual visits with the Ethiopian parliament.

Al-Monitor:  There are close ties between residents of Aswan and the people of Sudan. Will Aswan's MPs play a role in winning the Sudanese over in favor of Egypt in the Renaissance Dam issue?