The black flag over Israel's democracy

Israelis are relinquishing their democracy through their silence and actions. 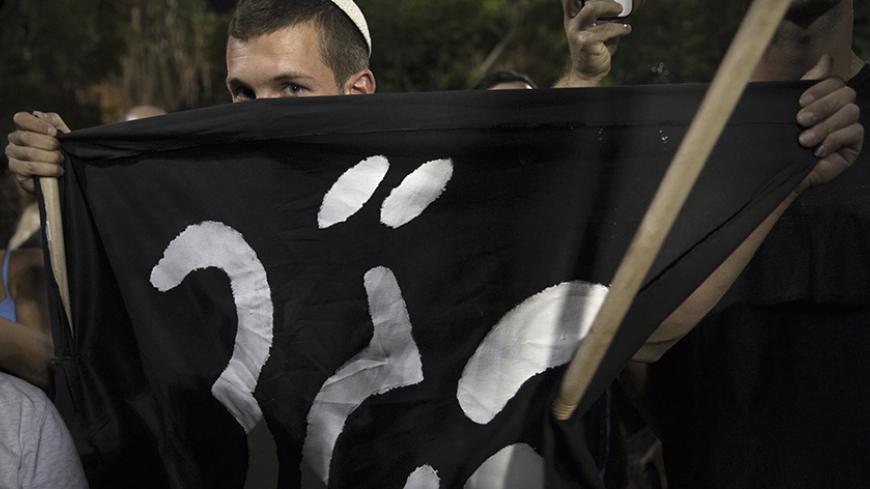 An Israeli right-wing activist holds a black flag with the Hebrew words for "High Court" during a rally to protest a recent court decision ordering Israel to release thousands of African migrants from detention, in Tel Aviv, Oct. 5, 2014. - REUTERS/Finbarr O'Reilly

This year marks the 60th anniversary of the massacre carried out by soldiers of the Israel Defense Forces against the Arab Israeli village of Kafr Qasim, during which 49 residents died, including women and children, who were making their way home from their fields. In anticipation of the 1956 military campaign over the Sinai Peninsula, Israel had declared a curfew for Arab villages on that day. The villagers were returning from the fields half an hour after the declaration, unaware of the curfew.

Supreme Court Justice Benjamin Halevy, in his famous ruling concerning the massacre, determined that the order to shoot the villagers had been “patently unlawful.” He said, “The hallmark of manifest illegality is that it must wave like a black flag over the given order, a warning that says: forbidden!" Halevy added, “Illegality that pierces the eye and revolts the heart, if the eye is not blind and the heart is not impenetrable or corrupt — this is the measure of manifest illegality needed to override the soldier's duty to obey and to impose on him criminal liability for his action.” Eleven officers and soldiers were sentenced to jail terms of 3-14 years, eventually downgraded by reduced sentences and clemency.

When the State of Israel was established, it imposed military administration over areas populated by Palestinians. Military rule, which was discriminatory and cruel, was repealed in 1966. A year later, in 1967, Israel established discriminatory and cruel military rule over the West Bank and Gaza after capturing them in the June war that year. These days, the black flag is once again flying in the evil wind blowing across Israel: Internal Security Minister Gilad Erdan, also a member of the diplomatic-security Cabinet, declared in October, “Every terrorist must know that he will not survive the attack he is about to carry out.” The leader of a political party, Yesh Atid Chairman Yair Lapid, announced that same week, “Anyone taking out a knife or screwdriver — [by a directive] should be shot with intent to kill.” Israel Police Deputy Commissioner Moshe Edri, until recently commander of the Jerusalem District Police, was even more emphatic, stating, “Anyone stabbing Jews or harming innocents is as good as dead.” Too often, injured attackers or people suspected of planning a car ramming, and even unlucky passersby, are shot to death by the security forces.

The foreign minister of a European Union state has been added to the Israeli Foreign Ministry’s blacklist after daring to demand that Israel investigate these lethal shootings by security officers. Prime Minister Benjamin Netanyahu, who is also foreign minister, described the demand by Swedish Foreign Minister Margot Wallstrom as “absurd and stupid” and refused to respond when asked if the Swede had been motivated by anti-Semitism, instead of rejecting the premise. These days, Israeli diplomats save their growing concern over the deterioration of Israel’s international standing for private conversations. They open up only when they are being personally insulted. The Foreign Ministry’s labor union flexed its muscles at Education Minister Naftali Bennett when he dared cast aspersions on ministry employees because of the active support of Alon Liel, former director general of the ministry, for European pressure on Israel to end the occupation.

Meanwhile, not one of Liel’s former Foreign Ministry colleagues stood up in his defense. They are too busy trying to explain to the world the foolish parallel Bennett drew this month between the alleged, extremist right-wing murderers of the Palestinian Dawabsha family in the village of Douma and the human rights organizations Breaking the Silence and B'Tselem. Bennett stated, “We see exactly the same dynamic [as the one that motivated the Douma murderers] on the radical left; they've lost hope,” alleging that they therefore act out in ways destructive toward Israel.

When in November Bennett dismissed the deputy director of the Council for Higher Education — Hagit Messer-Yaron, who had drafted a reform plan for broadening academic freedom — council members voted unanimously to replace her with a lecturer who is not a professor but who moves in the education minister’s circles. They are reserving their energy for battles over their pay. Meanwhile, the state has decided to prosecute a young performance artist, Natali Cohen Vaxberg, who relieves herself on the Israeli flag. Her fellow artists have not reacted. Their shows must go on. The thespians at the Cameri Theater are deep into rehearsals for Klaus Mann's “Mephisto,” a work about the evolution of moral corruption.

In the documentary “The Gatekeepers,” Avraham Shalom, former head of the Shin Bet, did not hesitate to draw a direct line between the horrific acts of the Third Reich and the fascistic effects of the occupation on Israel. “The future is black,” said Shalom. “It changes the character of the population. Because you put most of our young people in the army, and they see contradictory things: on the one hand it wants to be a people’s army and, on the other, a cruel occupation army resembling that of the Germans in World War II.”

The film also references “The Territories,” a 1968 essay by Yeshayahu Leibowitz. Leibowitz wrote, “A state ruling a hostile population of 1.5 to 2 million foreigners would necessarily become a secret-police state, with all that this implies for education, free speech and democratic institutions. The corruption characteristic of every colonial regime would also prevail in the State of Israel. The administration would suppress Arab insurgency on the one hand and acquire Arab Quislings [collaborationists or traitors] on the other.” Yuval Diskin, Shin Bet director from 2005 to 2011, responded tersely to Leibowitz's observations: “I agree with every word.”

Shalom, Diskin and the four other “gatekeepers” interviewed for the film — like the dozens of officers, former Mossad heads and diplomats who have joined peace and human rights organizations — saw the light only after leaving office. For many years, they justified their cooperation with the disastrous occupation in the hopes of exercising influence from within the system. Those wearing uniforms in a democracy are obliged to obey the orders of the political echelon, and civil servants are tasked with implementing the policy of the elected government, but fascism and witch hunts are a democracy overshadowed by a black flag. Whoever cooperates with it, whether in action or in silence, is carrying out a patently unlawful order.