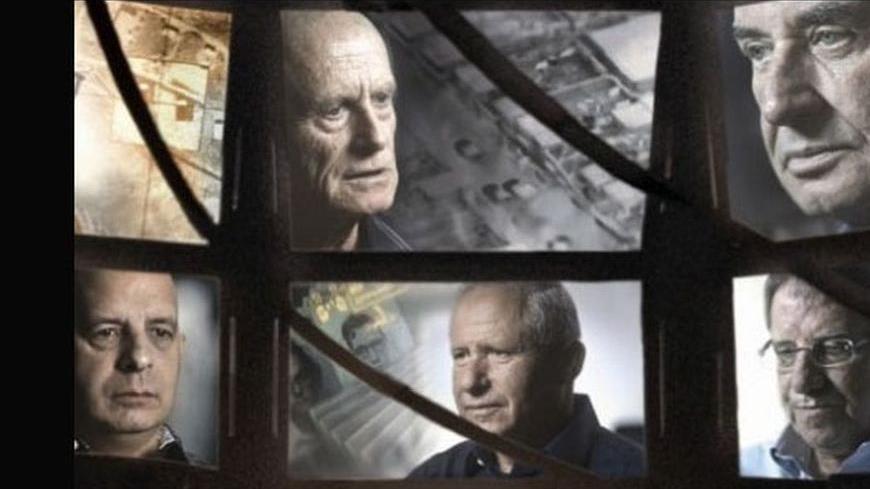 A scene from the "The Gatekeepers," an Israeli documentary with groundbreaking access to all the former heads of Israel's Shin Bet. - tiff.net
Mairav Zonszein
December 17, 2012

"They are the only ones who can have an impact," Dror Moreh told me. The director of a new Israeli documentary was speaking about his film’s six protagonists, all former heads of Israel's Shin Bet (internal security agency). Their first ever on-camera disclosure of their past work makes for a groundbreaking glimpse into the history of Israel’s covert security industry.

"The Gatekeepers," which has already been shortlisted for an Oscar nomination for best documentary and will be widely released in 2013, puts Israel’s counterterrorism efforts from 1980 until the present on display. The six former agents talk for the first time about the operations they oversaw, from recruiting Palestinians to help identify terrorists in their villages, to targeted assassinations, failures to thwart suicide bombings and the murder of former prime minister of Israel Yitzhak Rabin by an Israeli Jew. In this highly critical documentary, Moreh utilizes the willingness of these men to divulge the moral and practical dilemmas they have faced in the “war against terror” in order to expose and challenge the otherwise sacred Israeli concept that "anything goes" when it comes to securing Israeli lives against Palestinian threats.

“The power to take lives in an instant, there's something unnatural about it," says Yuval Diskin, who served as Shin Bet chief during 2005-2011. This is not a statement you expect to hear from the person who up until a year ago was in charge of Israel’s entire domestic security system. Yaakov Peri, who served as Shin Bet head in 1988-1994, describes how during his service, the agency rounded up hundreds of Palestinians (archival footage in the film shows that, like today, many of them are children) on a given day and put them in jail. He admits that once you retire, you “become a bit of a leftist.”

Perhaps the most revealing testimony comes from the most veteran of the six interviewed, Avraham Shalom, who served 1981-1986 and was ultimately forced to resign after the 300 bus affair in 1984, in which Shalom allegedly ordered the killing of two of the apprehended Palestinians who hijacked the bus. The incident put the legal boundaries of the Shin Bet’s authority in question and sparked a scandal between the agency and the government as to who should be held responsible. Shalom says in the movie that the moment Israel assumed control over 1 million Palestinians in 1967, “we stopped dealing with the Palestinian state, and started dealing with terrorism. Suddenly we had a lot of work to do in the West Bank and Gaza, and overseas too. We forgot about the Palestinian issue.”

The men not only confess to the moral turpitude inherent in this line of work, they also point a finger at successive Israeli governments, who have lacked the strategic foresight to recognize that there is no way Israel can continue to maintain a military occupation over the Palestinian population with no alternative in sight and expect to ensure Israeli security and stability.

“I wanted to put a mirror in front of Israeli society, forcing it to confront the situation we are in,” Moreh tells me. He got the idea to make the film after making a movie about former Prime Minister Ariel Sharon, who was prompted to evacuate the Gaza Strip in 2005 after some of the most elite pilots and commandos in the IDF published letters in 2003 expressing their refusal to continue to implement certain operations in the West Bank and Gaza that they deemed to be “immoral and illegal, and a direct result of the ongoing occupation which is corrupting Israeli society.” According to Moreh’s logic, if Sharon — the father of the settlement industry — changed his mind, and if he could get not one or two, but six men out of the heart of the Israeli security establishment to warn that Israeli policies are untenable, then the Israeli public will find it very difficult to dismiss or discredit them.

The movie, which will be adapted into a six-part television series in Israel, has thus far only been screened in Israel at the Jerusalem Film Festival earlier this year. Moreh says that after the screening, he was approached by three religious settlers who said that it really made them think, and that they felt compelled to reconsider their positions.

Moreh, who places himself in the center-left on the Israeli political spectrum, told me he no longer believes change in Israel will come from within, saying, “There’s no chance. Change will only come from international pressure that forces Israel to be so fearful of the consequences that it will have to change its ways.”

Despite this view, Moreh is nonetheless determined to try and have an impact on the Israeli public. The movie is in fact a chronicle of recent Israeli history’s most decisive events, from the assassination of Yithzak Rabin to the failure of the peace process, the Second Intifada and the continuing rise of the settler movement. As the six men recount Shin Bet’s operations during these periods, they unravel the accepted Israeli narrative that peace cannot be achieved with the Palestinians because Arafat said "no" at Camp David in 2000, and because of continued Palestinian violence and terrorism.

But by showing former Shin Bet chiefs openly questioning the efficacy of its tactics in achieving long-term stability, and by exposing the violence and impunity of radical entities within the national-religious settler movement (from which Rabin’s assassin, Yigal Amir, came and which Moreh believes Israel’s leadership has never properly addressed), the film in fact tries to demonstrate that the Israeli government is the one mainly responsible for the failure of the peace process.

The failure is ours. We are the strong ones, so it is up to us to initiate a solution.

At a time when the international community is threatening diplomatic measures against Israel, which announced more settlement construction in response to the UN vote to recognize Palestine as a non-member observer state, this movie is a timely last-ditch effort to convince the Israeli public that its government needs to drastically change its approach, that using its political and military might is not the answer to its security.

More than just a biography of these elite security men, the documentary is a portrait of the Israeli-Palestinian conflict and the corrupt and immoral nature of Israeli occupation, told through the eyes of its ultimate insiders.

Mairav Zonszein is a writer, translator and editor based in Israel. She blogs at 972mag.com.