The case for dissent in the IDF 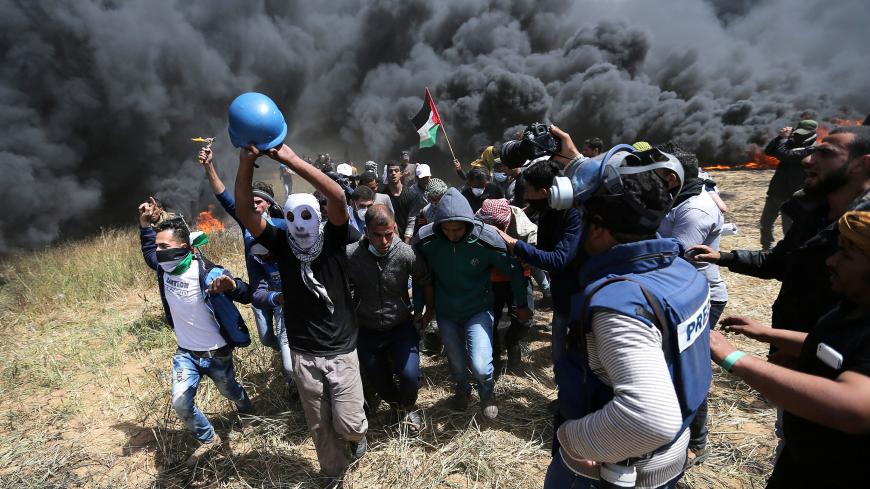 The unspeakable horror of the massacre in the Syrian town of Douma has overshadowed the violence along Israel’s border with the Gaza Strip in recent days. The roughly 30 Palestinian deaths in Gaza are nothing more than a statistical blip compared with the number of Syrians killed in their country’s seven-year civil war, which stands at half a million and counting.

Indeed, compared with the mass murder being perpetrated across from Israel’s northeastern border, the daily killings along its southern border seem like nothing more than a training mishap. True, the Israel Defense Forces (IDF) do not spray nerve gas over residential neighborhoods. They “only” fire at unarmed protesters on the border of the world’s largest prison. Nonetheless, it is unclear what made Defense Minister Avigdor Liberman reiterate the cliche that “the IDF is the most moral army in the world” when referring to the latest Gaza border incidents. To which army is he comparing the IDF? And how is the term “moral” even remotely compatible with Israel’s military control over millions of people for over 50 years?

Liberman announced that “anyone trying to approach the fence risks their life.” Even shooting dead a Palestinian journalist operating a camera drone 350 meters (383 yards) from the fence does not begin to scratch the IDF’s “moral” image. Not a single commander questioned the live-fire rules of engagement handed down to the troops ahead of the planned Palestinian demonstrations. Not one Knesset member stood by the call of the human rights organization B’Tselem, urging IDF soldiers to refuse to fire at unarmed civilians engaging in nonviolent resistance. Disobeying orders was never an option. I will try to explain why.

Israel’s history of conscientious objection is as old as the state. In June 1948, several pilots, one artillery officer and eight soldiers refused an order to bomb and intercept the Altalena, a ship carrying weapons for Israel’s Etzel underground. In late October 1956, Israeli border guards killed 43 Israeli Arab citizens, among them nine women and 17 children and youths, in the fields of the village of Kafr Kassem. However, seven of the eight company commanders at the scene avoided carrying out the order given by the battalion commander to shoot in order to kill any Arabs found outside their home after the curfew imposed by the military on Arab villages. Responding to the massacre, Israel’s vaunted poet Natan Alterman wrote, “Such an incident must strike every human society as a terrifying nightmare, shake the seats of the supervisors and commanders, both direct and indirect, challenge entrenched concepts, alarm military instructors, and generate a moral reckoning and search for those responsible.”

In the landmark 1958 verdict handed down against participants in the Kafr Kassem massacre, Judge Benjamin Halevy wrote, “The hallmark of manifest illegality is that it must fly like a black flag over the given order, a warning that says: 'forbidden!' Not formal illegality, obscure or partially obscure, not illegality that can be discerned only by legal scholars, is important here, but rather, the clear and obvious violation of law … Illegality that pierces the eye and revolts the heart, if the eye is not blind and the heart is not impenetrable or corrupt — this is the measure of manifest illegality needed to override the soldier's duty to obey and to impose on him criminal liability for his action.”

The concept of disobeying a manifestly illegal order was upheld years later by the Supreme Court’s verdict against Ehud Yatom, a senior operations officer of the Shin Bet found complicit in the killing of two Palestinian terrorists who hijacked an Israeli passenger bus in 1984. The justices ruled that the order given by the head of the Shin Bet to kill the two appeared manifestly illegal and Yatom should have refused it. Military law recognizes a soldier’s right to refuse an order on the grounds of conscientious objection only when the order is patently illegal and its execution violates the principles of basic human morality. A military tribunal even ruled that a soldier is duty bound to disobey an order of this kind.

After 16 Palestinians were killed March 30 along the Gaza border on the first day of the “Great Return March,” law professor Mordechai Kremnitzer wrote that the use of live fire against protesters for nearing the fence with Israel was illegal. “Even when it marks a border, a fence is not more sacred than human life,” wrote the jurist, who served until recently as deputy president for the study of democracy in the Israel Democracy Institute.

Kremnitzer and organizations such as B’Tselem constitute a negligible minority in Israeli society and have no representation in the government. Right-wing politicians and pundits dub them “a fifth column” and accuse them of consorting with the enemy.

On the other hand, the current coalition includes politicians who pander to the rabbis who urged soldiers to refuse to evict Israeli settlers from the Gaza Strip during the 2005 disengagement. The rabbis viewed the orders given at the time as manifestly illegal and in violation of Jewish law. And what was the punishment meted out to those who disobeyed the army’s orders? Three of the 163 soldiers who refused to carry out their orders were indicted, one of them was sentenced to jail; 65 soldiers were brought up on disciplinary charges, with 46 of them sentenced to terms ranging from six to 56 days. Other action, such as a reprimand or removal from a command position, was taken against 49 officers and soldiers. Truly deterrent punishments.

The response at the time to the Gaza withdrawal strengthened the view that the evacuation of Israeli settlements in the occupied West Bank would face mass disobedience by troops and officers, even verging on civil war.

On the other hand, only a handful abide by the approach advocated by professor Yeshayahu Leibowitz, the iconoclastic Israeli thinker. Leibowitz argued that objection by several hundred young people to serve in what he termed “the Israeli occupation army” could shock the public and pave the way for a political moral-spiritual upheaval. Sadly, not a single IDF sniper rose up in recent days to say, “Sorry sir, but directing live fire at unarmed people is immoral, illegal and un-Israeli; I refuse the order.”